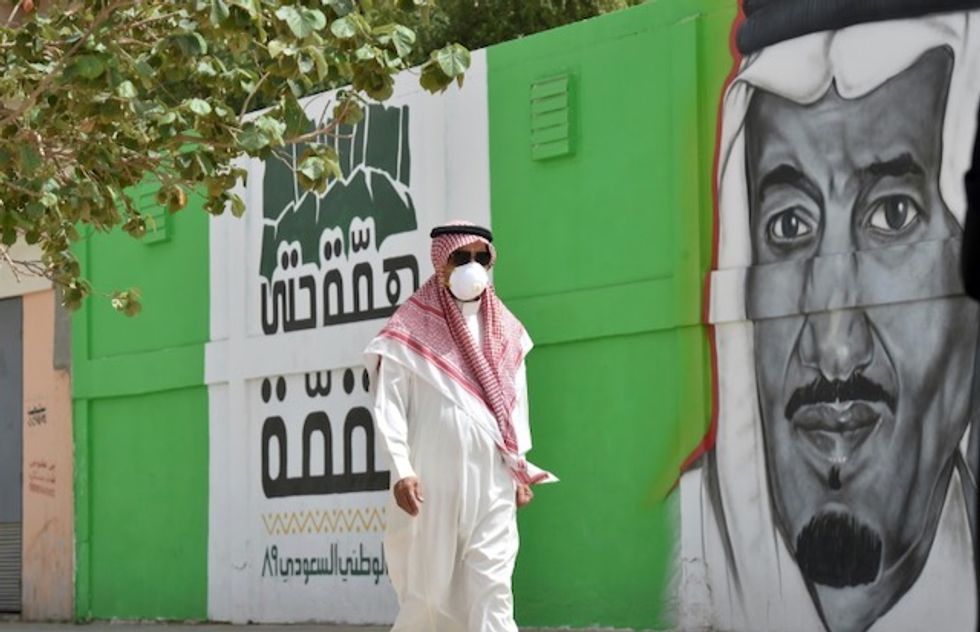 From empty hotels to shuttered beauty salons, oil-dependent Saudi Arabia is bracing for a coronavirus-led economic slump on top of possible austerity measures as crude prices go into free fall.

Huge losses are expected after the Arab world's biggest economy shut down cinemas, malls and restaurants, halted flights, suspended the year-round umrah pilgrimage and locked down eastern Qatif region -- home to around 500,000 -- in a bid to contain the deadly virus.

The top crude exporter also faces plummeting oil prices, which slipped below $30 a barrel this week for the first time in four years, on the back of sagging demand and a price war with Russia.

The shock of this liquidity sapping cocktail of events has necessitated austerity measures which are likely to imperil grandiose diversification projects.

Adding to the chain of events are the recent arrests of King Salman's brother and nephew, which triggered speculation of political instability amid the government's public silence on the royal purge.

"It's crisis time," said a Saudi government employee, explaining why he had begun converting part of his salary into US dollars and gold coins.

"Everything is unpredictable and we should be ready for the worst."

The central bank has shrugged off fears that plunging oil prices were straining the kingdom's currency, pegged for decades to the US dollar.

A jeweller in Riyadh told AFP he had fielded a number of enquiries to convert "substantial amounts of cash" into gold bars and coins.

Some Saudis also worry that recruitment in the public and private sectors will freeze, just as unemployment was already high.

Meanwhile, Saudi students are worried that government scholarships for overseas education will take a hit.

The finance ministry has instructed government bodies to submit proposals to slash this year's spending by 20 to 30 percent, the economic consultancy Nasser Saidi and Associates said in a research note.

"This will likely take the shape of postponed projects and delays in awarding contracts" among other economising measures, the note said.

The kingdom is now preparing budget scenarios in which crude prices could drop as low as $12-$20 per barrel, according to the Energy Intelligence Group.

"Public confidence depends on government spending and oil sentiment -— both are down," said a consultant advising a Saudi ministry on a major project.

"We don't know if we will have our jobs tomorrow."

The once free-spending OPEC kingpin has instructed Saudi ministries that they need to account for "every penny" they spend, the consultant added.

Saudi authorities did not respond to requests for comment.

Several Riyadh hotels —- many of them empty amid falling tourist numbers —- have been forced to send their staff on unpaid leave.

But providing some support, the health ministry has booked multiple Riyadh hotels to quarantine people after the coronavirus scare, according to several staff and guests who were forced to empty the properties at short notice.

The oil crash follows the crude exporter's decision to hike production from April and offer the biggest price cuts in two decades, in retaliation for Russia's refusal to tighten supply as the virus saps demand.

Saudi Arabia has shrugged off criticism that the move could bankrupt its oil-producing rivals, indicating it was no longer willing to play the role of "swing producer" that bears the burden of stabilising the markets.

"The days of Saudi Arabia absorbing oil market shocks on behalf of the global economy and other producers are probably over," said Saudi expert and author Ali Shihabi.

"The energy game... is now a survival of the fittest."

The deep-pocketed kingdom, with fiscal reserves of around $500 billion, has reiterated it is an ultra low-cost producer of crude and can withstand low prices for years.

But Riyadh has posted a budget deficit every year since the last oil price rout in 2014. It has borrowed over $100 billion and drawn from its reserves to plug the deficit.

Crown Prince Mohammed bin Salman's multi-billion dollar projects to wean the economy away from oil remain vulnerable, and Saudi Arabia needs a crude price of about $80 a barrel to balance its budget.

One source close to the royal court dismissed such concerns and said the detentions were meant to send a stern warning within the royal family not to oppose the crown prince.

Yet "the threat to Prince Mohammed isn't coming from his royal rivals," said Kristin Diwan of the Arab Gulf States Institute in Washington.

"It's from the collapse of oil revenues and with them his ambitious economic plans."