Parrots get probability, use stats to make choices: study 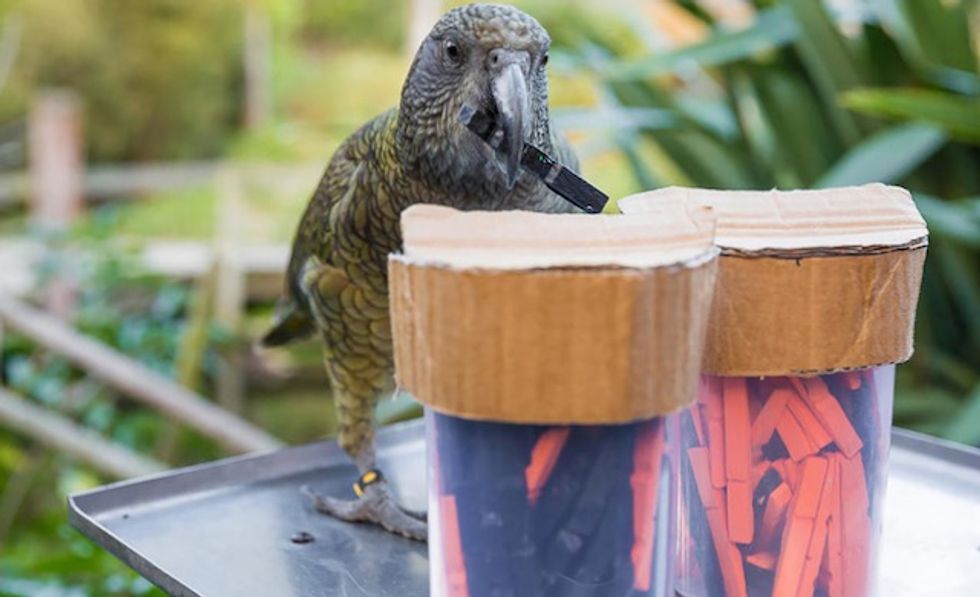 Does Polly want a cracker? That all depends on statistics.

Parrots can learn to choose based on probability, making them the first animal outside of the great ape family that uses statistical modelling in their decision-making process, researchers said Tuesday.

Wildlife experts taught six kea, a species of large parrot native to New Zealand renowned for their intelligence, to play a variation of a game designed to test their statistical understanding.

The birds -- Blofeld, Bruce, Loki, Neo, Plankton and Taz -- were trained to associate black tokens with a food reward and orange pegs with none.

During early tests, they used their beaks to pick up the black tokens and were given a treat.

The researchers then displayed the pegs in clear jars, with differing ratios of black and orange, picked up one token from each and concealed them in their palms, before offering them to the birds.

The kea preferred tokens from the jars that had a relatively higher proportion of black to orange tokens, showing that they were playing the percentages.

In addition, the kea showed a clear preference towards researchers who had previously demonstrated a "bias" towards picking more black tokens than orange.

"We always knew that they seemed quite intelligent, so we weren’t too surprised to find that they could understand probabilities," said Amalia Bastos, research assistant at the University of Auckland's School of Psychology.

"What was most surprising is that they can integrate social or physical information into their probabilistic judgements," she told AFP.

Bastos and her research team aren't currently sure what evolutionary advantage is bestowed by the ability to recognise probability.

But the trait was long thought to be the reserve of intelligent primates and humans, and shows the kea and possibly its relatives may not be so bird-brained, after all.

"Kea have the boldest personalities of all the bird species I have ever met," said Bastos.

"Each individual has their own quirky preferences and idiosyncrasies that we learn about when we work with them. They are curious and not at all shy, making them very easy to work with.

"They have definitely outsmarted me on more than one occasion," she added.