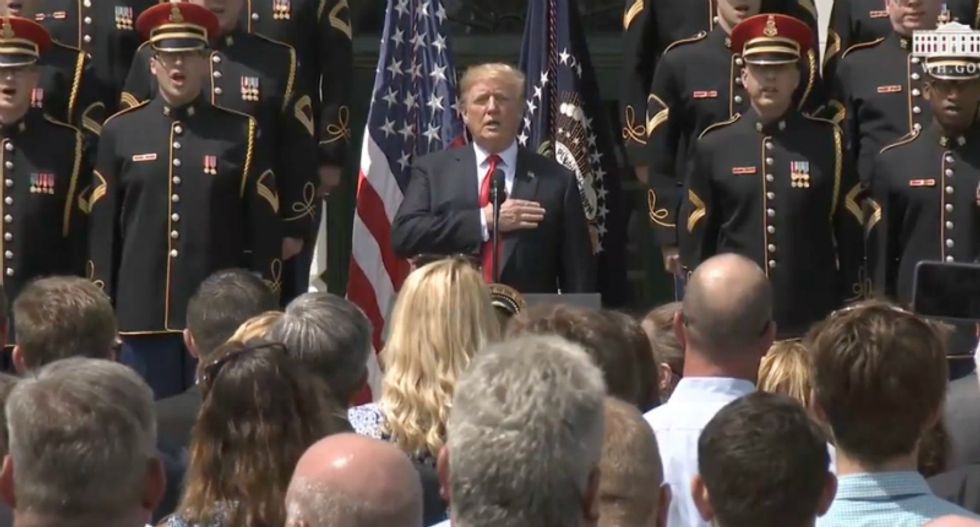 President Donald Trump does the Pledge of Allegiance at his "Celebration of America" event following his Eagles snub. Image via screengrab.

New reporting from The Daily Beast shows yet another example of the Trump administrations failure to respond to the COVID-19 coronavirus pandemic.

"As the novel coronavirus threatens to overwhelm the U.S. public health systems, the Pentagon is withholding more than $104 million from the military’s most important chemical and biological research facilities—including a lab that conducts cutting-edge work on infectious diseases—according to a senior Pentagon official," The Beast reported Friday evening.

"And that’s only one aspect of the military’s financial shortfall in the unfolding crisis. A document briefed to the top brass of the Army on Thursday and obtained by The Daily Beast from a second Defense Department official reveals that the service’s response to the coronavirus outbreak is short of funding by almost $1 billion," The Beast revealed.

"For the Army more broadly, a financial document obtained by The Daily Beast found massive shortfalls for detecting, treating, and preventing COVID-19 from spreading throughout 1.2 million soldiers and Army employees, as well as roughly 3 million dependent family members," The Beast reported. "The total cost estimate briefed to leaders on Thursday comes with a price tag of more than $955 million, leaving the Army in the red by more than $942 million."