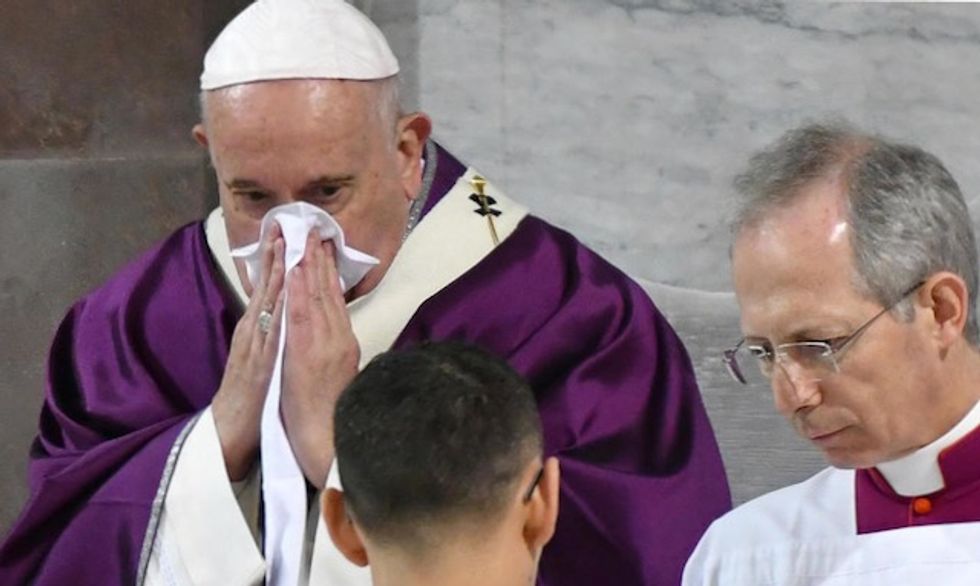 Pope Francis, who is suffering from a cold, has tested negative for the coronavirus, an Italian newspaper reported Tuesday, as Italy battles Europe's worst outbreak.

Vatican spokesman Matteo Bruni did not respond to an AFP request for comment on the Messaggero newspaper report, and sources said it was unlikely the Holy See would comment on the pope's health Tuesday.

Francis cancelled a Lent retreat for the first time in his papacy this weekend, after axing all public meetings at the end of last week over the cold.

"Unfortunately, a cold forced me not to take part this year," the 83-year-old pontiff told a crowd on Saint Peter's Square after suffering two coughing fits while reciting his traditional Angelus Prayer.

The new coronavirus has spread from China across much of the world, Italy among the worst affected with over 2,000 people infected and 52 deaths.

The Argentine-born pope has been seen coughing and blowing his nose for days.

With rumours swirling that the pope himself had come down with COVID-19, the Vatican issued a formal denial on Sunday.

"There is no evidence to suggest a diagnosis of anything other than a slight ailment," a spokesman told AFP.

Francis was tested for the disease last Wednesday after showing cold symptoms following a period outside in the wind.

The Vatican has been projecting an image of calm, releasing a pre-recorded message from the pope on Tuesday and stressing that he was still scheduled to deliver his Angelus Prayer on Sunday.

But the vast crowds that usually throng Saint Peter's Square, and the queues that snake in front of the museums are gone.

The Vatican is set to supply staff working in close contact with tourists with masks and gloves, the Messaggero reported.

The pope has enjoyed a life of good health despite losing part of a lung as a young man and suffered from sciatica -- a nerve condition that causes pain in his hip.

Yet he rarely cancels appointments and normally takes extra time to mingle with supporters and the faithful.

The Vatican itself has had at least one coronavirus-related scare.

The offices of a French priest working at the Vatican's ministry of communication were disinfected on Monday, following the quarantine of his community of 20 priests from Rome's Church of St Louis of the French.

They had been in contact with a priest who returned to Paris in mid-February and tested positive for the virus last week.

On Monday, an internal letter leaked to the press was sent to the staff at the ministry, saying the ministry employee was in isolation but "is well and showing no symptoms".

Vatican experts said fear over the virus in the tiny city state was particularly acute because many residents were elderly.

Among those most at risk is retired ex-pope Benedict XVI, 92, who lives in a small former monastery inside the Vatican.

Benedict in 2013 became the first pope in 600 years to resign, citing health reasons.

The Swiss Guards, who control those who come in and out of the Vatican and move around its grounds, have tightened checks at its five gates and reduced access to Benedict's home, the Stampa daily said.