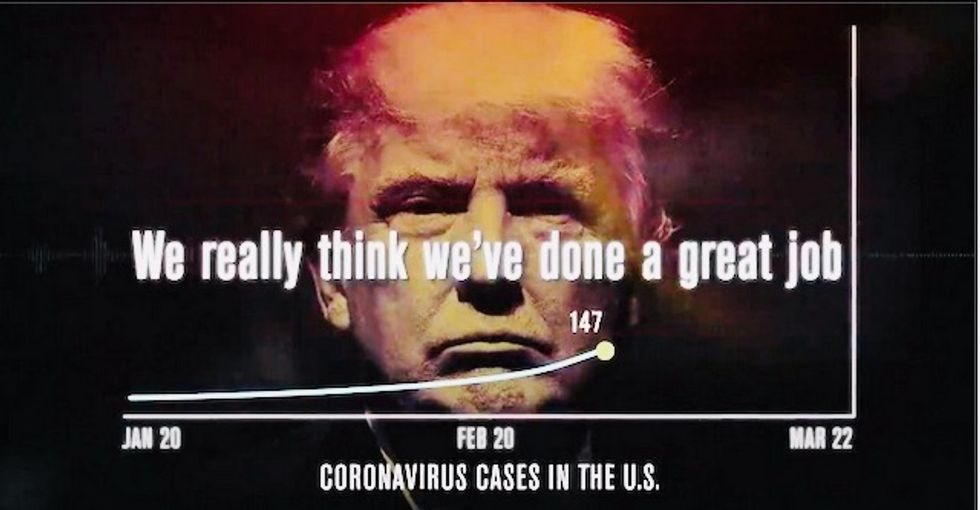 Lawyers for President Donald Trump's official Super PAC, America First Action, tried to get TV stations in key battleground states to stop airing an anti-Trump ad that focuses on his horrific mismanagement of the coronavirus crisis. The TV stations refused to pull the ad, placed by the pro-Biden Super PAC Priorities USA (PUSA), which rightly noted that the pro-Trump Super PAC did not even have standing to make the demand.

So President Trump's official campaign stepped in to do what his Super PAC could not.

Attorneys for the Donald J. Trump for President campaign sent a Cease and Desist letter to those TV stations demanding they stop airing the anti-Trump ad.

Not only did they make that demand, but they threatened that the Federal Communications Commission (FCC), which the President controls in that he appoints its commissioners, could pull their broadcast licenses if they did not comply.

The letter reads in part: "your station has an obligation to cease and desist from airing [the ad] immediately to comply with FCC licensing requirements, to serve the public interest, and to avoid costly and time-consuming litigation."

It also says "we formally demand that your station refuse to continue airing it to meet your responsibilities not to broadcast false information," which is ironic given the number of falsehoods and lies Trump tells on a daily basis which are often broadcast by news networks.

It adds, "your station has a responsibility to 'protect the public from false, misleading or deceptive advertising,'" and threatens that "your failure to remove this deceptive ad ... could put your station’s license in jeopardy."

This is the ad the Trump campaign claims is "patently false, misleading, and deceptive," says he did not call the coronavirus a "hoax," and essentially claims the ad says he did.

Trump refused to take the threat of the coronavirus seriously, now he won’t take responsibility as his administrati… https://t.co/8TwEq50RQp
— Priorities USA (@Priorities USA)1584997080.0

The letter can be read on the Trump campaign's website.