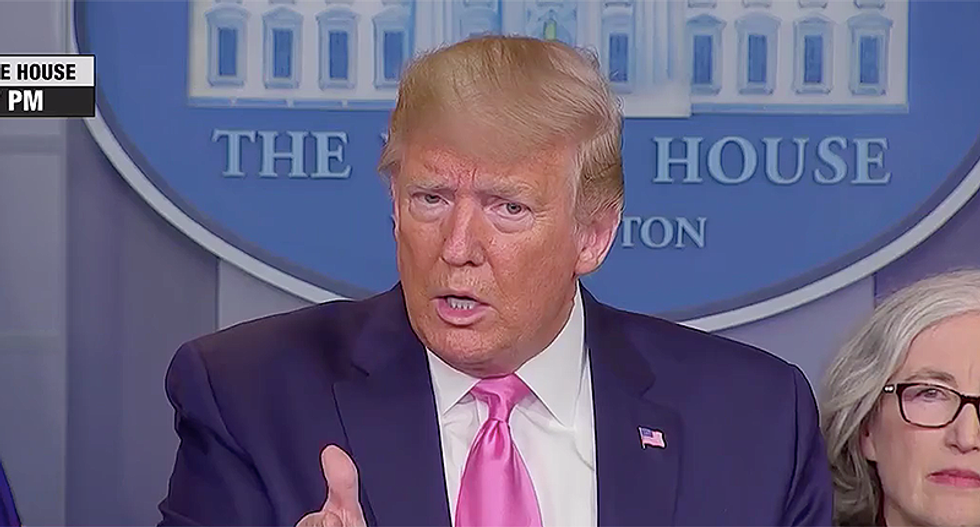 Brendan Buck slammed the President for not showing leadership during his Wednesday night Oval Office address, then went on to warn that Trump might be spreading coronavirus to other world leaders.

"One of the craziest things that's happening right now is the President has clearly been in close contact with people who have been infected with the coronavirus," Buck told MSNBC's Chuck Todd Thursday evening on "Meet the Press Daily."

"So far they're refusing to get tested. And also, he's hanging out right next to the Prime Minister of Ireland today, potentially infecting other world leaders."

Trump spent several hours Thursday with the prime minister and head of government of Ireland, Leo Varadkar. As the photo above shows, Trump clearly is not observing the social distancing rule of allowing six feet between people.

"The fact that he's not leading a little bit himself – the statement that could have sent: that I'm going to take [the opportunity to] self quarantine – all kinds of members of Congress are now self-quarantining," Buck continued.

"In some way," he added, that "would show some leadership."

Earlier, as Todd began the segment, Buck, who spent nearly nine years in senior positions on Capitol Hill, said: “You do an Oval Office address to show that you are up to the moment. To not only tell people that it’s going to be OK, but make them believe it’s going to be OK. And clearly [Trump] didn’t do that.”

President Trump has come in close proximity to a number of people who either have tested positive for coronavirus or have come into contact with those who have. Trump spent the weekend at Mar-a-Lago with Brazilian President Jair Bolsonaro and some of his administration officials. Among them, Bolsonaro's press secretary, who tested positive for coronavirus on Thursday.

Trump also rode on Air Force One with Rep. Matt Gaetz, who learned while on board that he had been in proximity the weekend prior to someone who tested positive for coronavirus. Gaetz, and trump's new chief of staff have decided to self quarantine after learning they are possibly at risk.

WATCH: @BrendanBuck on Pres. Trump’s leadership during the coronavirus crisis: “You do an Oval Office address to sh… https://t.co/CLzI5SAVs7
— Meet the Press (@Meet the Press)1584050483.0