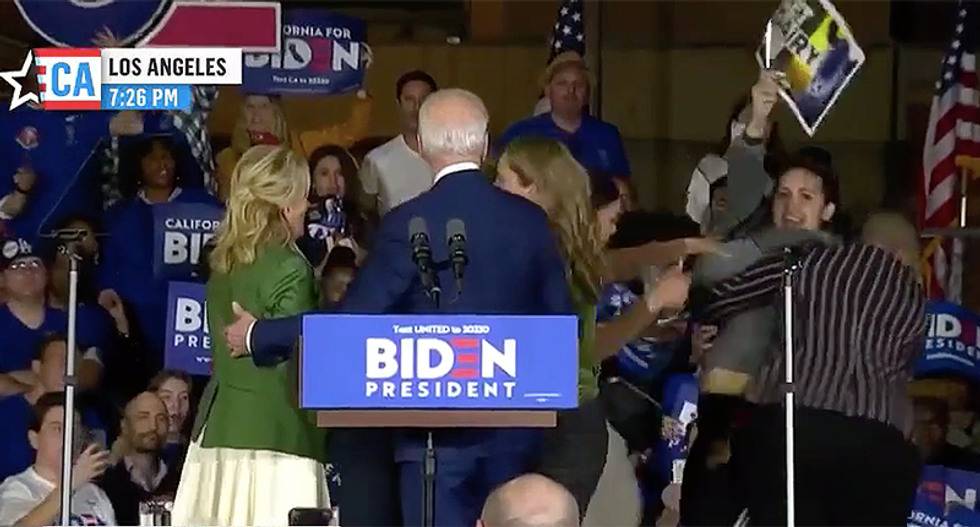 Waving a "Dairy Must Die" sign, a woman rushed the stage, chased by what appeared to be a tall white man. Someone else managed to make it back onto stage, when Sanders jumped into action.

Known for her quick wit and expert debates against Republican commentators on CNN, Sanders' proved she's got the chops for campaign protests too.

A campaign Facebook page for Direct Action Everywhere appears to make this a regular thing for them. At Sen. Elizabeth Warren (D-MA) rally, they got their time with the Senator, though it wasn't while they were on stage in the middle of their rally.

MSNBC's Brian Williams noted Dr. Jill Biden's fierce response, where she physically blocked the protester, and put herself in front of her husband. Co-host Rachel Maddow called it a "wax-on-wax-off" move from the "Karate Kid." In fact, Biden lunged at the protester with cat-like reflexes while her sister-in-law also put herself between the protester and the vice president.

While living in Washington, Dr. Biden was known for darkening the doors of a gym near the Naval Observatory many, many times. Dr. Biden stands 5'6", but dynamite often comes in small packages.

Just witnessed protestors rushing the stage, Jill Biden jumped in front of her husband and puts her arms out. She… https://t.co/WCW4EdkeGO
— MommaT (@MommaT) 1583292788.0

Amazing Getty photo of Jill Biden fighting off that anti-dairy protester. Symone Sanders is behind her, getting rea… https://t.co/yPg9yrxBNZ
— David Mack (@David Mack) 1583298577.0

My only tweet regarding #SuperTuesday: The @SecretService has a Candidate Nominee Operations Center and it should… https://t.co/oXtBQnS6Sr
— Juliette Kayyem (@Juliette Kayyem) 1583293461.0

See below as well as some other responses:

Gotta give Dr. Jill Biden some credit... This is not the first time that she, not security, has blocked a protestor… https://t.co/zP7HAdOROy
— Brad Dayspring (@Brad Dayspring) 1583292557.0