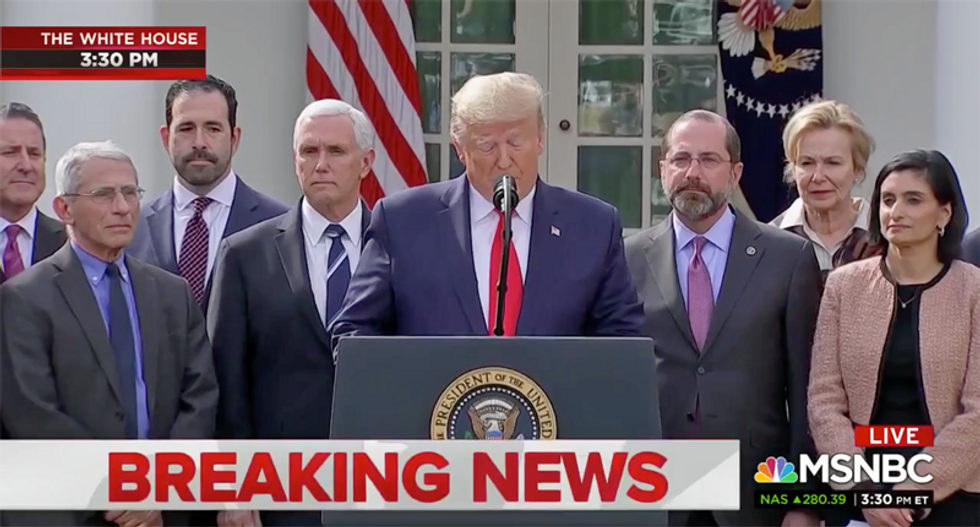 President Donald Trump was brutally taken to task for his own words in the COVID-19 crisis in a new Washington Post column.

Columnist Dana Milbank asked readers to imagine Trump giving a "fireside chat" during the crisis like President Franklin D. Roosevelt did in the Great Depression.

"In these dark times, Americans crave the comfort of competent leadership. I have therefore taken the liberty of drafting for Trump a fireside chat for our times — using entirely his own words," Milbank wrote.

Milbank's imagined speech from Trump demonstrated the cluelessness the commander-in-chief has displayed during the coronavirus pandemic.

"The coronavirus is very much under control in the USA," the speech began.

"We have it totally under control. I’m not concerned at all. It’s one person coming in from China. We pretty much shut it down. It will all work out well," the speech continued.

"We’re in great shape. Doesn’t spread widely at all in the United States because of the early actions that myself and my administration took. There’s a chance it won’t spread. It’s something that we have tremendous control over,"  the speech read. "Looks like by April, you know, in theory, when it gets a little warmer, it miraculously goes away. One day it’s like a miracle, it will disappear. Just stay calm. It will go away."

"This is a flu. I didn’t know people died from the flu. Here, we’re talking about a much smaller range. It is very mild," the speech argued. "The tests are all perfect. Anybody that wants a test can get a test. The tests are beautiful. We have a tremendous testing setup."