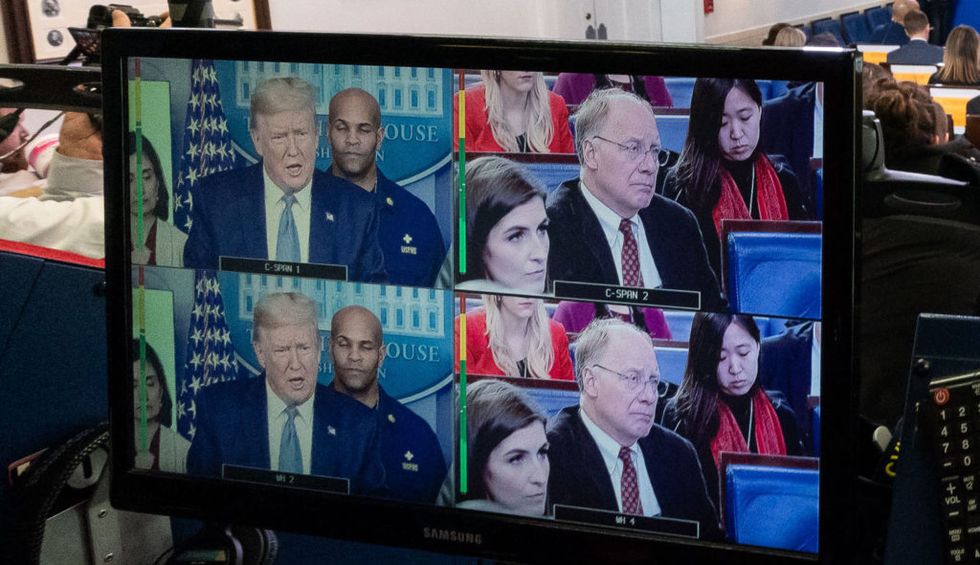 After continually downplaying the Covid-19 pandemic for nearly two months, President Donald Trump dramatically changed course this week and has shifted his tone to reflect the dire circumstances. But as he pivots his public relations strategy, he’s also clearly and deliberately trying to rewrite his own history to claim — falsely — that he knew it the outbreak was bad and has been working hard to stop it.

“I’ve always known this is a real — this is a pandemic,” Trump told the media on Tuesday in the White House press briefing room. “I felt it was a pandemic long before it was called a pandemic.”

And on Monday, I reported that Trump’s rhetoric on the outbreak had clearly turned the corner — and had begun more closely reflecting reality. He acknowledged that the infection is particularly contagious and dangerous, that the pandemic could stretch into late summer or longer, and that it may trigger an economic recession.

Some have cheered this change of pace.

“This is an important thing to note and to applaud from an American standpoint, from a human standpoint,” said CNN’s Dana Bash. “He is being the kind of leader that people need, at least in tone, today and yesterday. In tone, that people need and want and yearn for in times of crisis and uncertainty.”

But while it’s important to acknowledge that Trump really has changed the way he talks about the coronavirus, Bash gave the president far too much credit. Because even though it’s good that Trump is now conveying the level of threat the virus poses to American society — and thus may be reversing some of the damage he wrought by spreading doubt about the need to fight it — he’s still not being the leader the country needs. He’s incapable of that.

He proved as much when he was asked on Friday about his administration’s decision to shut down the White House pandemic office, which may have managed the situation much more effectively. Trump told the reporter who asked about the closure that it was a “nasty question.” And he flatly denied that he holds any responsibility for his administration’s galling failure to adequately test for cases of the infection in the early days of the pandemic, which likely contributed to the proliferation of the virus. “I don’t take responsibility at all,” Trump said.

And even now as he acknowledges how bad the outbreak could be, he’s still lying. He says he “felt it was a pandemic long before it was called a pandemic,” but this contrasts starkly with the record of his own public comments.

On Jan. 22, for instance, Trump was asked if he was worried about a pandemic.

And as recently as Sunday, Trump was sounding a similar note about control of the virus.

“It’s a very contagious virus,” he said. “It’s incredible. But it’s something we have tremendous control of.”

Well, when I’m talking about control, I’m saying we are doing a very good job within the confines of what we’re dealing with. We’re doing a very good job. There’s been a — there’s been a tremendous amount of the way they’re working together. They’re working hand-in-hand. I think they’re doing, really, a great job. And from that standpoint, that’s what I was referring to. … [The virus is] not under control for any place in the world.

Jonathan Chait pointed out that Trump introduced another major lie on Monday, saying: “We have a problem that, a month ago, nobody thought about.”

Here at AlterNet, we began running stories about the virus in January. On January 31, we ran a story warning that “the increasing risks brought about by the spread of the coronavirus” could add to the  “ingredients for an incipient global economic calamity.”

So Trump’s tone has changed, but he can’t stop lying. And while it’s better that he acknowledges that the coronavirus is a genuine threat to the American people, this change was only forced on him by the changing of circumstances — he’s not becoming a better leader. He’s incapable of that, and he should resign as president as soon as possible.

Since that won’t happen, the media should do whatever it can to avoid falling into the trap of believing he’s turned over a new leaf. He’s just trying to rewrite history and hoodwink us all once again.