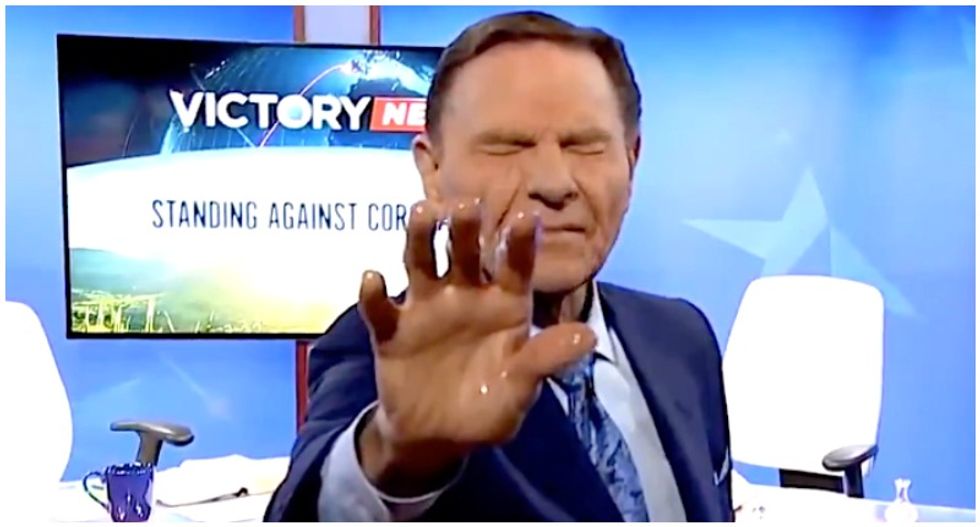 As the coronavirus outbreak continues to worsen, some of President Trump's most vocal evangelical supporters are taking to the airwaves and telling their followers that they can physically be healed by the power of prayer -- prayer that can only be facilitated by their pastors.

One of those people is evangelist Kenneth Copeland, who, as the Daily Beast points out, visited the White House in 2018 for a dinner Trump held with a group of evangelical leaders. Earlier this month, Copeland went viral for a segment he did on his Victory Network channel where he asked his viewers to put their hands on their TV screens in order to receive God’s divine protection against the coronavirus.

“Put your hand on that television set,” Copeland said. “Hallelujah. Thank you, Lord Jesus. He received your healing. Now say it: ‘I take it. I have it. It’s mine. I thank you and praise you for it.'”

Just days later, Copeland blamed the virus on people's dislike for Trump. “There’s been some really nasty things that have happened this year—last year and this year—that I’m quite certain—well, I know—opened the door to a lot of this,” he said.

Speaking to the Daily Beast, Right Wing Watch's Peter Montgomery says a global pandemic is the perfect opportunity for religious charlatans like Copeland to market themselves as healers.

Another one of those charlatans is the Trump-supporting Pastor Rodney Howard-Brown, who was one of the evangelical leaders who laid hands on Trump during an infamous prayer session in the Oval Office. Last month, he promised to rid Florida of the coronavirus -- just as he says he did with the Zika virus.

“And we disturbed it, declared we cursed that thing in the name of Jesus and Zika disappeared. We are doing the same thing with the Coronavirus. We do not need it on these shores, and obviously — somebody said ‘Well what about the rest of the world?’ I can’t be responsible for every city or whatever.”

Read more at The Daily Beast.