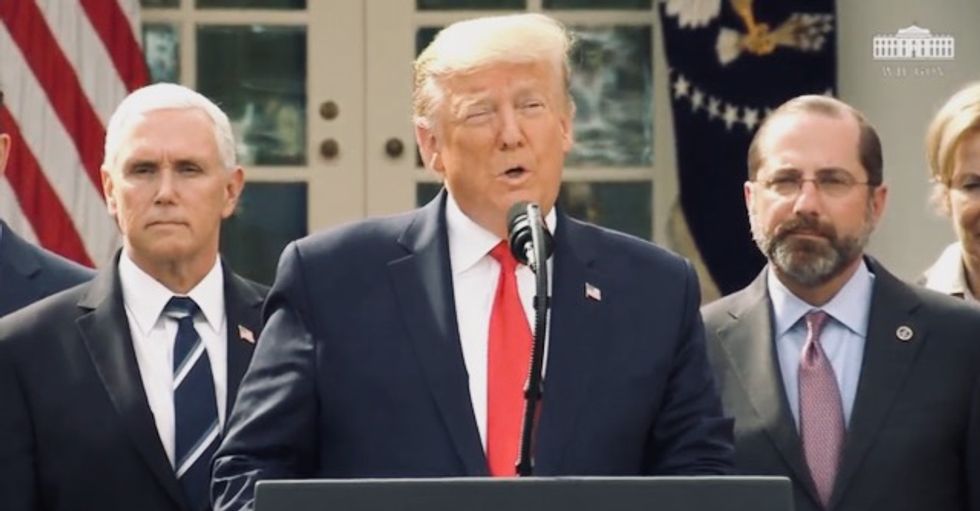 President Donald Trump once again revealed his top goal is to minimize the appearance of the extent of the coronavirus pandemic in the U.S. in an attempt to help his re-election chances.

On Friday Trump was forced to finally declare a national emergency, which he did not want to do, out 0f fear it would make him look weak.

Friday afternoon, Trump appeared in the Rose Garden, 30 minutes late, to announce what his administration would be doing in conjunction with the national emergency declaration.

Trump turned his focus to coronavirus testing, which he delayed early on to make it appear that coronavirus was a "hoax," and later promising that the 15 cases would quickly become "zero," and when those pronouncements clearly became lies, Trump repeatedly – inside the White House and in public – made clear he wanted as little testing as possible.

"Our overriding goal is to stop the spread of the virus and to help all Americans who have been impacted by this," Trump told Americans from the Rose Garden podium Friday afternoon.

"Again, we don't want everybody taking this test,” the President, focused on re-election, urged. "It’s totally unnecessary. This will pass through and we're going to be even stronger for it.”

Politico's Dan Diamond in an NPR interview documented how Trump knew early on the importance of testing but did not push for it in an effort to reduce the number of confirmed cases of COVID-19.

President Trump: "Our overriding goal is to stop the spread of the virus and to help all Americans who have been im… https://t.co/v7QUlsrqoD
— CSPAN (@CSPAN)1584128862.0