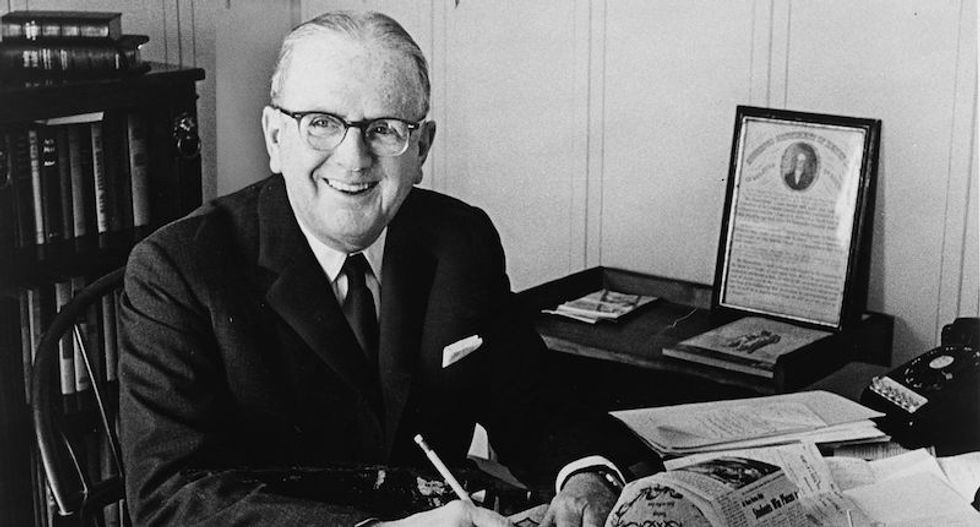 While most pandemic-aware Christian leaders have already canceled any public gathering for the Feast of the Resurrection (a.k.a. Easter) on April 12 (April 19 for Orthodox Christians) the President We Have has some other ideas. He made his resurrection hopes noxiously clear at his Rose Garden "town hall" on Fox News Tuesday morning, again in an afternoon Fox News interview, and a third time at the daily C-19 briefing on Tuesday evening.

He would like to see Christian churches "packed" for the celebration of Our Lord's miraculous victory over death. Completely ignoring the consensus of medical experts, including experts in his own coronavirus task force, and again referring to the new deadly virus as "flu," Trump suggested that the country could be reopened for business in less than three weeks and that Easter would be a good time to celebrate and mark a miraculous recovery.

Here is CNBC's account of Trump's Easter fixation on Tuesday:

“We’re opening up this incredible country. Because we have to do that. I would love to have it open by Easter,” Trump said.

In a second interview with Fox that aired Tuesday afternoon, Trump said he offered the holiday as a deadline because “Easter’s a very special day for me.”

“Wouldn’t it be great to have all the churches full?” Trump asked. “You’ll have packed churches all over our country … I think it’ll be a beautiful time.”

Trump added that “I’m not sure that’s going to be the day,” but “that would be a beautiful thing.”

By the time of the evening task force briefing, Trump was starting to walk this madness back, but only a little and much too late (with "too late" being the organizing principle of Team Trump's overall response to COVID-19). "We'll only do it if it's good," said Trump, while still insisting that an Easter celebration "would be a beautiful timeline."

This was the same briefing where Dr. Deborah Birx broke the news that New York City was becoming such a horrible plague incubator that people traveling out of the city absolutely need to self-isolate for two weeks in their new location.

With a stricken look on his face, poor Dr. Anthony Fauci was forced to stumble through an attempt to square the president's Easter fantasy with sound medical practice; he offered the notion that there could be areas in the country with very few infection rates (now) where some churches might, in fact, be able hold Easter celebrations.

Dr. Fauci knows that the medical community is completely horrified and flabbergasted by the idea of returning to mass gatherings so soon. Yesterday one leading infectious disease specialist told CNBC that Trump's call for packed churches was "the making of a major public health disaster." Another told the New York Times that Trump will "have blood on his hands" for this kind of irresponsible talk.

And Easter is a "very special day" for Trump?

My thought here is that the only quasi-religious experience Trump may actually remember is the spectacular Easter efflorescence at Fifth Avenue's Marble Collegiate Church back in his father's era. Fred Trump hauled the family from Queens to Marble Church because that's where the city's successful people gathered on Sunday to flaunt their finery. Fred was naturally attracted to Marble Church's longtime minister, Norman Vincent Peale, and to Peale's patented mashup of Christianity and magical thinking (which Peale called "Positive Thinking").

Apart from Positive Thinking there’s no other accounting—unless perhaps a mental deficiency—for Trump's idea that Easter this year can be a great celebration of new life. People who do come to church will in fact be courting disease and death.

Always the apostle of spiritual boosterism, Peale never cared to dwell on other less festive parts of the Passion story: on Good Friday's Golgotha horrors or on Holy Saturday's vast emptiness of despair and defeat. Neither does Trump care to dwell on mortality and despair.

Positive Thinking has no room for those bits. Acknowledging death and defeat is for "losers." But those are the bits we are experiencing right now.

Positive Thinking is a quintessentially American phenomenon, and Trump rides ever-higher in the polls as he doles out more of it each and every day. But when I hear Trump blather on in his increasing detachment from reality, I can't help recalling the E.E. Cummings riposte to all Trump-like bombast and bravado:

he was a handsome man

and what i want to know is