US launches airstrike against Taliban, days after peace deal 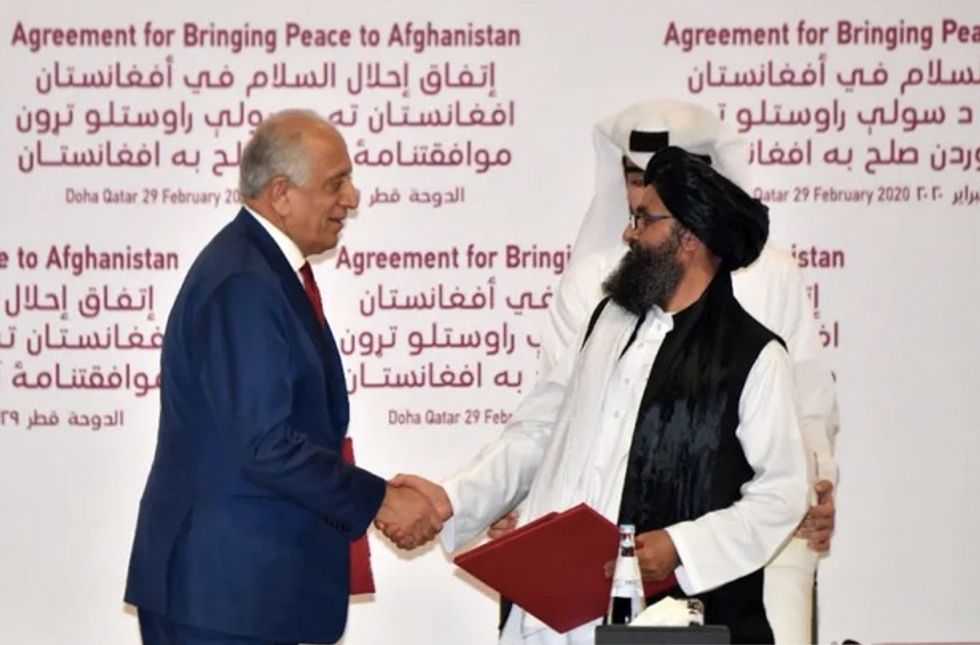 The US launched an airstrike against Taliban fighters to defend Afghan forces Wednesday, an American military spokesman said, as violence spirals after a string of deadly attacks by the insurgents, throwing the country's nascent peace process into grave doubt.

News of the airstrike in southern Helmand province -- the first in 11 days -- came hours after US President Donald Trump told reporters he had had a "very good" chat with the Taliban political chief, who on Saturday signed a historic deal with Washington to withdraw foreign forces.

Since the signing in Doha however, the militants have ramped up violence against Afghan forces, ending a partial weeklong truce that provided a rare reprieve to war-weary residents.

US Forces-Afghanistan spokesman Sonny Leggett tweeted that the airstrike took place against Taliban fighters who were "actively attacking" an Afghan forces checkpoint in Helmand province.

"This was a defensive strike to disrupt the attack," he tweeted.

"We call on the Taliban to stop needless attacks and uphold their commitments. As we have demonstrated, we will defend our partners when required."

He said insurgents had carried out 43 attacks on checkpoints in Helmand on Tuesday alone.

The insurgents killed at least 20 Afghan soldiers and policemen in a series of overnight attacks, government officials told AFP Wednesday, casting a pall over peace talks between Kabul and the Taliban, due to begin on March 10.

A defence ministry official speaking to AFP on condition of anonymity confirmed the army toll, while the provincial police spokesman Hejratullah Akbari confirmed the police fatalities.

The news of the attacks came after Trump told reporters in Washington on Tuesday that he had a "very good" relationship with Taliban political chief Mullah Baradar, with the pair speaking on the phone for 35 minutes, according to the insurgents.

"The relationship is very good that I have with the mullah. We had a good long conversation today and you know, they want to cease the violence, they'd like to cease violence also," he said.

But on Wednesday, US military spokesman Leggett warned that the "#Afghans & US have complied w/ our agreements; however, Talibs appear intent on squandering this (opportunity) and ignoring the will of the people for #peace."

Trump has touted the Doha deal as a way to end the bloody, 18-year US military presence in Afghanistan -- right in time for his November re-election bid.

Under the terms of the deal, US and other foreign forces will quit Afghanistan within 14 months, subject to Taliban security guarantees and a pledge by the insurgents to hold talks with the national government in Kabul.

The agreement also includes a commitment to exchange 5,000 Taliban prisoners held by the Afghan government in return for 1,000 captives -- something the militants have cited as a prerequisite for talks but which President Ashraf Ghani has refused to do before negotiations start.

Trump has said the Taliban and Washington both "have a very common interest" in ending the war.

AFP / NOORULLAH SHIRZADA US President Donald Trump had sharp words for the government of Afghan President Ashraf Ghani, suggesting they were doing well financially from the prolonged presence of American troops

Since Saturday's deal signing, the Taliban have been publicly claiming "victory" over the US and on Monday they announced they would resume attacks on Afghan national forces.

Ghani's government last week sent a delegation to Qatar to open "initial contacts" with the insurgents, but Taliban spokesman Suhail Shaheen on Tuesday said the militants would not meet Kabul's representatives except to discuss the release of their captives.

Apparent differences between the Doha agreement and a separate joint US-Afghan declaration made in Afghanistan underline the obstacles facing negotiators.

The US-Taliban deal committed to the release of prisoners, while the Kabul document only required both sides to determine "the feasibility of releasing" captives.