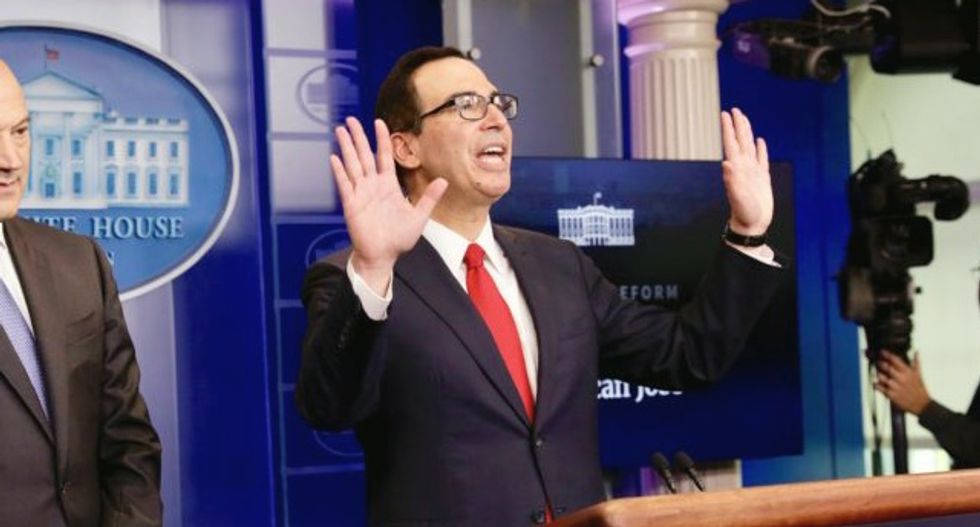 The White House on Sunday reportedly refused to back down from its demand that a coronavirus relief package include $500 billion, which would be provided to corporations at the discretion of Treasury Secretary Steve Mnuchin.

PBS News Hour correspondent Meredith Lee reported on Sunday that the White House was standing firm on the proposal after some Democrats called it a "slush fund."

A Democratic source told Igor Bobic that the bill would permit the Treasury secretary to withhold the names of corporate recipients for up to six months.

"Millions may now lose their jobs," Sen. Elizabeth Warren wrote on Twitter. "And Trump wants our response to be a half-trillion dollar slush fund to boost favored companies and corporate executives – while they continue to pull down huge paychecks and fire their workers."

Any rescue fund should be administered by an independent body, not by the Treasury Secretary of the most incompeten… https://t.co/kIY7pdMP0t
— David Frum (@David Frum) 1584890009.0

We have to be very careful about federal govt taking extraordinary power for means other than the pandemic. Justic… https://t.co/jT4TWREHzC
— Joe Lockhart (@Joe Lockhart) 1584891102.0

No slush fund for Mnuchin! Last time he made decisions without congressional oversight we got Suicide Squad! https://t.co/oqTR0eLExI
— Jon Lovett (@Jon Lovett) 1584892864.0

Millions may now lose their jobs. And Trump wants our response to be a half-trillion dollar slush fund to boost fav… https://t.co/E6alg9jz6D
— Elizabeth Warren (@Elizabeth Warren) 1584894924.0

I will vote against a giant slush fund that protects favored corporations and executive paychecks with no meaningfu… https://t.co/y6Jxcdgv52
— Elizabeth Warren (@Elizabeth Warren) 1584894925.0

Everything that has happened for the last 3 yearsd shows that Trump would use a corporate slush fund to reward his… https://t.co/Cc86OyhcI6
— Dan Pfeiffer (@Dan Pfeiffer) 1584895181.0