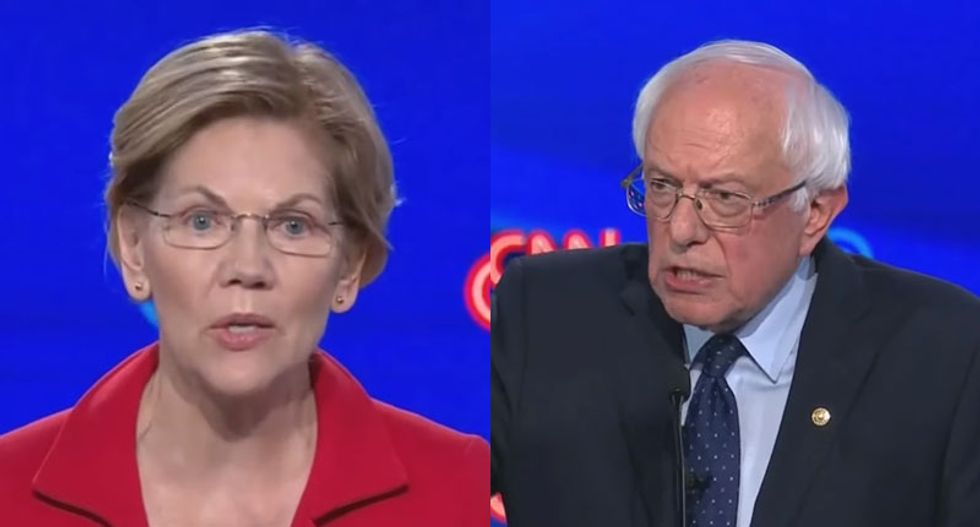 "If she can make the case for Sanders, she'll help build a progressive front against a moneyed and well-organized moderate force."

After Super Tuesday's results made clear that the 2020 Democratic primary is now a two-candidate race between former Vice President Joe Biden and Sen. Bernie Sanders, progressives called for an end to divisive infighting and some urged Sen. Elizabeth Warren to join Sanders in a united front against the party's deep-pocketed and organized establishment wing.

"I'm a Bernie supporter who builds with Warren supporters," tweeted Varshini Prakash, executive director of the youth-led Sunrise Movement, which endorsed Sanders in January. "This isn't the time for infighting and vitriol. Let's leverage our shared power to break through the wall of corporate media, win this primary, and defeat Trump. Let's #BuildTogether."

"The obstacle in the way of a more progressive future for Americans isn't Sanders, but the coalition forming around Biden. If Warren wants a righteous fight, this is it."

It was a call for progressive unity that others echoed both before and after Super Tuesday, which saw Biden win 10 of 14 states—including delegate-rich Texas—and take a narrow lead in pledged delegates. Sanders won four states, including California, the largest delegate prize of the night.

With the #BuildTogether hashtag making the rounds among both Sanders and Warren supporters, journalist Sam Adler-Bell said the "posts are quite obviously an effort to build goodwill between two support bases that absolutely must combine to defeat the corporate/billionaire wing of the party. I have no patience for anyone upset about it."

Roger Lau, Warren's campaign manager, sent an email to staffers Wednesday morning announcing that Warren is meeting with her team to "assess the path forward" after she failed to place higher than third in any of the Super Tuesday states, including her home state of Massachusetts.

"This decision is in her hands," wrote Lau, "and it's important that she has the time and space to consider what comes next."

Sanders campaign manager Faiz Shakir echoed that sentiment in an interview with CNN ahead of Super Tuesday. "She has been campaigning very hard, has raised a lot of money, and has earned a lot of votes," Shakir said. "She should be given the time and space to decide for herself about the future of her campaign."

Tim O'Brien, who served as a senior adviser to the Bloomberg campaign, said the former New York City mayor plans to put his resources "in the broadest way possible behind Joe Biden's candidacy."

Investigative reporter Alex Kotch argued in a series of tweets that Bloomberg's decision to support Biden only increases the importance of Warren's next steps:

New York Magazine's Sarah Jones wrote Monday that because the Democratic establishment and big-money donors are rapidly coalescing behind Biden, it is time for Warren to leave the presidential race and support Sanders for the Democratic nomination.

"For Warren's supporters, this will be difficult to accept, and for good reason," wrote Jones. "The senator has spoken movingly of her working-class background, and introduced a slate of generous policies that represent long overdue corrections to corporate power. In debates, she can be fearsome. She is probably the first person to publicly humiliate Michael Bloomberg in years."

But without a realistic path to the nomination, Jones added, "it would be a catastrophic error in judgement for Warren to remain in the race till the convention."

According to a national Quinnipiac poll released last month, 33% of Warren supporters say Sanders is their second choice for president—a number Jones argued could rise if Warren backs Sanders with a full-throated endorsement.

"If she can make the case for Sanders, she'll help build a progressive front against a moneyed and well-organized moderate force," Jones wrote. "The time to do so is now. The obstacle in the way of a more progressive future for Americans isn't Sanders, but the coalition forming around Biden. If Warren wants a righteous fight, this is it."

Working people have few allies in the Senate; Elizabeth Warren is one of them. But she doesn't have a realistic pat… https://t.co/Ptk3NKPAkJ
— Sarah Jones (@Sarah Jones) 1583187332.0

After President Donald Trump on Wednesday morning fired off a tweet seemingly intended to sow further division among Sanders and Warren supporters, comedian and Medicare for All activist Rob Delaney responded that "as with most ideas this suppurating wound of a person extrudes, it would be a good idea to do the exact opposite."

"I hope Sanders and Warren understand this and unite," Delaney wrote.