Journalist on Trump's Iran threats: ‘What kind of maniac risks such a war in the middle of a global pandemic?’ 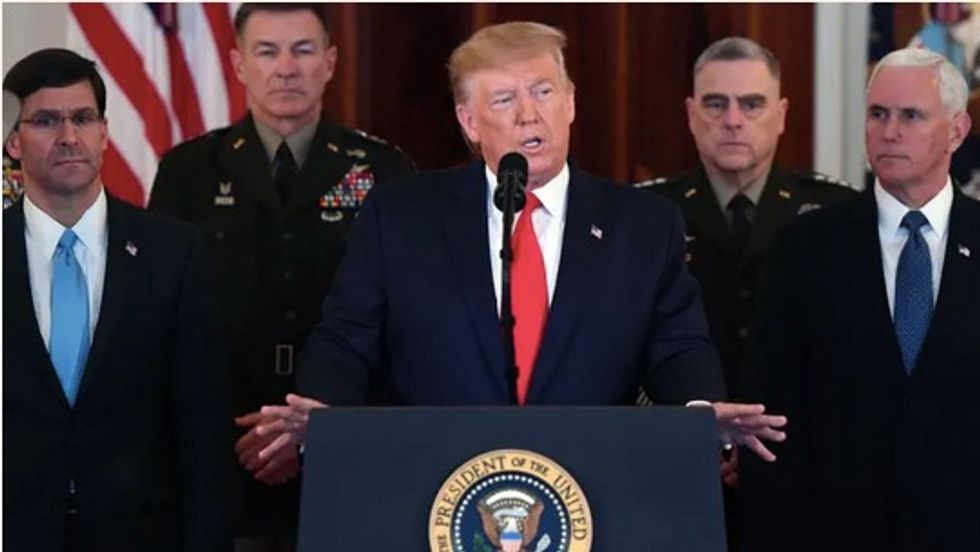 "What kind of maniac risks such a war in the middle of a global pandemic? Answer: President Donald Trump, aided and abetted by Secretary of State Mike Pompeo and national security adviser Robert O'Brien."

The Iranian Foreign Ministry on Wednesday called for an immediate halt to "warmongering during the coronavirus outbreak" as U.S. forces reportedly deployed Patriot missiles to Iraq and President Donald Trump warned—without presenting a shred of evidence—that Tehran is planning a "sneak attack" on American troops in the region.

Warning that heightened U.S. military activity in Iraq could lead to further "instability and disaster" in the Middle East, Iran's Foreign Ministry said the Trump administration should "respect the wishes of the Iraqi people and government and leave the country." The Pentagon insisted in a statement that the Patriot missiles were mobilized for purely defensive purposes.

"Now we discover that strangling the Iranian economy isn't enough for Trump and Co. They are bent on using the spread of a deadly disease as cover for a new war."

As Common Dreams reported, Trump on Wednesday threatened Iran with a "very heavy price" if it attacks "U.S. troops and/or assets" in the region, ignoring pleas from advocacy groups and the United Nations for a global ceasefire and international cooperation against the novel coronavirus, which has devastated the U.S. and Iran and is spreading quickly in Iraq.

Trump's tweet came just over an hour after he attended an intelligence briefing with U.S. national security officials.

In a tweet of his own late Wednesday, Iran's top diplomat Javad Zarif urged Trump "not to be misled by usual warmongers."

"Unlike the U.S.—which surreptitiously lies, cheats, assassinates—Iran only acts in self-defense," said Zarif. "Iran starts no wars, but teaches lessons to those who do."

The New York Times reported last week that the Pentagon has issued a directive ordering "military commanders to plan for an escalation of American combat in Iraq" and "prepare a campaign to destroy an Iranian-backed militia group that has threatened more attacks against American troops."

"Some top officials, including Secretary of State Mike Pompeo and Robert C. O'Brien, the national security adviser, have been pushing for aggressive new action against Iran and its proxy forces—and see an opportunity to try to destroy Iranian-backed militia groups in Iraq as leaders in Iran are distracted by the pandemic crisis in their country," according to the Times.

In response to the Times report, The Intercept's Mehdi Hasan urged the U.S. public to "beware of Trump using the coronavirus as a cover for war with Iran."

"Question: What kind of maniac risks such a war in the middle of a global pandemic? Answer: President Donald Trump, aided and abetted by Secretary of State Mike Pompeo and national security adviser Robert O'Brien," Hasan wrote.

"Less than two weeks ago, in a piece about the cruelty and callousness of maintaining sanctions on Iran while a pandemic rages across that country, I described the people in charge of the U.S. government as 'sociopaths,'" Hasan added. "Now we discover... that strangling the Iranian economy isn't enough for Trump and Co. They are bent on using the spread of a deadly disease as cover for a new war. Perhaps 'sociopaths' was an understatement."