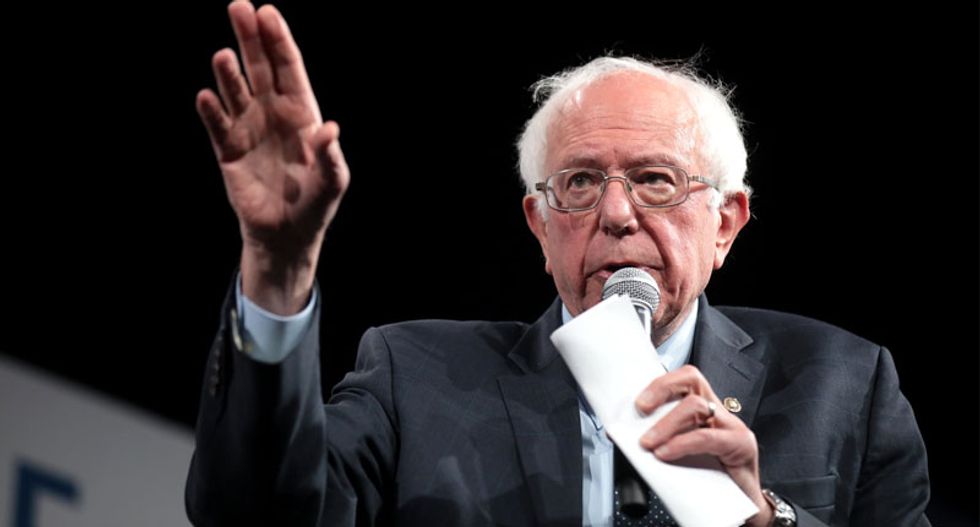 Sen. Bernie Sanders on Friday released his demands for six key priorities that he said must be included in the next round of federal economic relief for suffering Americans as the coronavirus pandemic cripples the country's healthcare system and eviscerates the economy.

"We are in the midst of a COVID-19 pandemic that could lead to the death of hundreds of thousands of Americans and infect millions of others, and we are entering an economic downturn that could be worse than the Great Depression of the 1930s," Sanders said. "In this unprecedented moment in modern American history, it is imperative that we respond in an unprecedented way."

According to the Vermont lawmaker's office, Sanders wants the next bill to include six provisions that are aimed at helping working people in the U.S. weather the crisis:

In a video posted to social media, Sanders said the pandemic presents an outright "emergency" for the nation's most vulnerable populations and for all working people, and that drastic measures must be taken to protect people's health and economic wellbeing:

Sanders, a candidate for the 2020 Democratic presidential nomination, announced the priorities Friday afternoon. Campaign co-chair Nina Turner, in a tweet, cited the need for ambitious thinking.

"We are entering a downturn that could be worse than the Great Depression," said Turner. "We must respond to this unprecedented challenge with the boldest measures: Sanders is outlining the most comprehensive set of priorities that will IMMEDIATELY provide relief and leave no one behind."

The plan won praise from Ana Maria Archila, co-director of the Center For Popular Democracy Action.

"Bernie's plan for the fourth phase of a federal legislative response centers people, not corporations," said Archila. "It is about helping us survive with the cash assistance, healthcare, nutrition, worker safety we need, and relief from monthly payments we cannot make. It speaks to the needs of frontline workers who are battling the pandemic and making it possible for the rest of us to shelter in place."

Inclusion of the kind of provisions that Sanders is demanding in the next stimulus bill would make the package "the boldest legislation in history," the senator's office said. However, as some observers pointed out, the six core concepts likely represent the least that is necessary to stop a total economic meltdown.

A number of progressive groups backed the Sanders plan, calling the forward-thinking ideas in the proposal necessary to stave off an economic disaster.

Make the Road Action co-director Javier H. Valdés made the case that Sanders is offering concrete, real help to Americans.

"The priorities outlined by Senators Sanders for the next Coronavirus Stimulus Package are what our country needs to ensure everyone in our community can access the financial and medical support needed to withstand this crisis," said Valdés." We stand with Senator Sanders in demanding a $2,000 monthly emergency payment, emergency food, and Medicare to every person in our country regardless of their housing situation, immigration status, or whether they have a bank account or internet connection."

Meanwhile, Sanders' rival former Vice President Joe Biden continues to claim that universal healthcare is an unworkable solution to the insurance crisis in the U.S. and that a single-payer system would not have stopped the outbreak. As Common Dreams reported, estimates of workers losing coverage due to loss of employment in 2020 could top 35 million.

In an interview Friday, Sen. Elizabeth Warren (D-Mass.), a former candidate for president whose run was seen as ideologically similar to Sanders', praised Biden as analogous to former President Barack Obama, who "saw us through a crisis starting back in 2009 with steady, thoughtful, smart leadership."

"That's what I think we can expect from Vice President Biden," said Warren, who stopped short of an outright endorsement.

Sanders appeared on MSNBC Friday to promote his plan. During the segment, host Ali Velshi listed a number of longstanding priorities of the senator's, including Medicare for All and student debt relief, and wondered if the crisis was making Sanders' case for president for him.