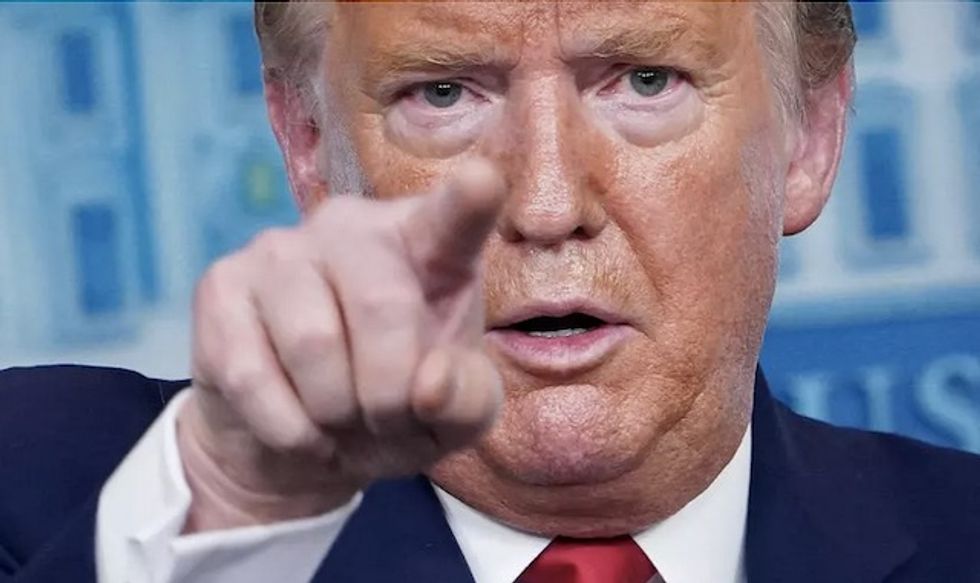 President Donald Trump on Tuesday promised the $181 billion oil and gas industry a federal bailout, after the price of oil suffered historic drops even after Trump last week declared victory when he personally intervened with OPEC. On Monday the price of oil futures for May contracts dropped below zero, for the first time in history. As the photo shows, Trump met with Big Oil executives earlier this month in the White House. In the foreground is Darren Woods, Chief Executive Officer of ExxonMobil.

What's causing the prices of oil and gas to drop is people are staying home because of coronavirus. Demand has dropped dramatically, although the prices at the pump have not dropped equally.

The oil and gas industry is among the wealthiest in the world, so Americans seeing Trump's tweet are now furious. Hospitals and even doctors offices are struggling amid reports some are or will be forced to close permanently as a result of the pandemic – or rather, as a result of the federal government's mismanagement of the pandemic. State and local governments are desperate for funding as they face dramatically reduced revenue while having to spend tremendous amounts to fight against the virus. And the American public didn't get a bailout. Some received one-time payments of $1200 or less.

Meanwhile, Trump in 2016 received over $1 million in campaign donations from Big Oil.

Some noted the oil and gas industry already gets billions of taxpayer dollars in subsidies, some noted Trump's close relationship with top executives, some noted if it happens there should be strings attached to force them to go green, and some demanded the federal government protect the Postal Service before Big Oil.

@realDonaldTrump And there it is. A bailout for the oil industry, which is already subsidized by US taxpayers. Bu… https://t.co/dWmslW56u5
— Brian Tyler Cohen (@Brian Tyler Cohen)1587476213.0

Can someone please explain to me how oil and airlines get a gov bailout but somehow I am expected to keep 6 months cash in savings?
— Meghan (@Meghan)1587478744.0

Just so you know corrupt trump is again demanding a Big Oil Bailout for his billionaire buddies that he wants *you*… https://t.co/W9HkuCTFY6
— Bill Pascrell, Jr. (@Bill Pascrell, Jr.)1587478360.0

Some discussion on forums that Trump wants to help out oil companies. Part of that aid is to help them pay for cap… https://t.co/lb7L1dOQYp
— Liberal American (@Liberal American)1587479463.0

If you’d like to bail out the oil industry(or any other large industry that uses tax shelters) before USPS I’m gonn… https://t.co/cBgmskyBhh
— Adam Reed Cahill (@Adam Reed Cahill)1587478944.0