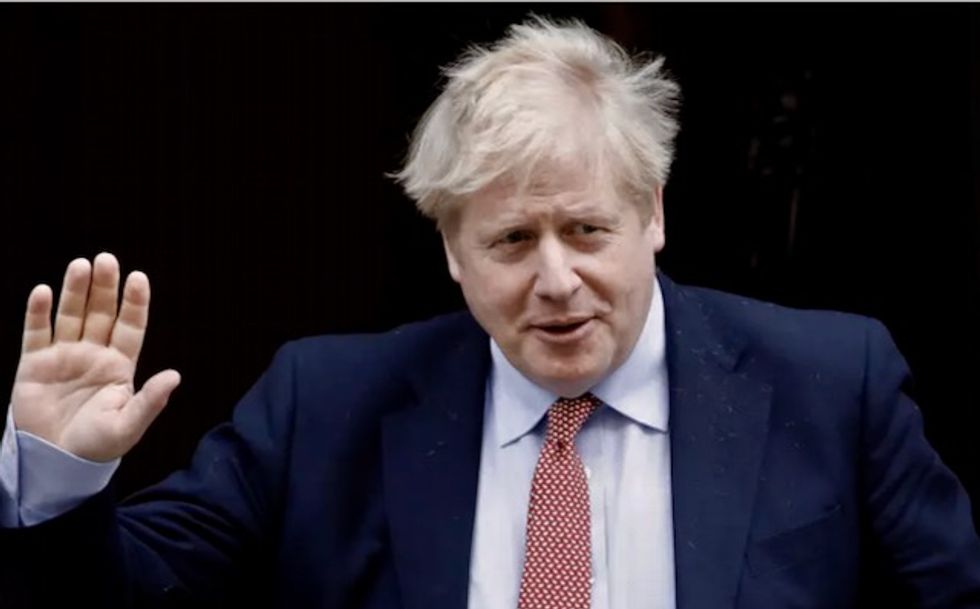 Prime Minister Boris Johnson is expected to return to work soon after his recovery from COVID-19, as pressure mounts on his government to explain how to get Britain out of lockdown.

Johnson, 55, has been recuperating at the British prime ministerial retreat, Chequers, outside London since his release from hospital on April 12.

He spent three days in intensive care and later admitted that "things could have gone either way", forcing him to take it easy before returning to the political fray.

But there have been increasing signs his return to Downing Street could be imminent, after officials said he had spoken to Queen Elizabeth II and also US President Donald Trump.

Trump on Thursday said Johnson was full of "tremendous energy" and sounded "incredible" when they talked on the phone.

"I was actually surprised... he was ready to go," he told reporters.

The Daily Telegraph, Johnson's former employer, suggested he could be back at his desk on Monday, and hold briefing meetings with individual cabinet ministers.

But Health Secretary Matt Hancock was more cautious, despite the prime minister's progress.

"I spoke to him yesterday, he's cheerful, and he's ebullient and he's definitely on the mend in a big way," he said on Friday.

"When exactly he comes back is a matter for him and his doctors."

Foreign Secretary Dominic Raab has been deputising since Johnson was taken to hospital on April 6, chairing cabinet meetings about political strategy to fight the outbreak.

But while nominally in charge, Raab as "first secretary of state" would have required overall cabinet approval to take any major decisions, such as easing lockdown measures.

In reality, Raab, senior minister Michael Gove and Health Minister Matt Hancock have largely shared the leadership burden in Johnson's absence, which has coincided with the suspected peak in hospital deaths and positive tests.

Britain has been one of the worst-hit countries in the world by the virus, with hundreds of deaths reported every day.

The actual death toll could rise further when deaths in the community are taken into account, particularly from care homes.

While Johnson was away, senior ministers have faced collective criticism over shortages in personal protective equipment (PPE) and a lack of widespread testing, particularly of frontline health and social care workers.

"The government hasn't been as agile as it should have been," Chaand Nagpaul, chair of the council of the British Medical Association (BMA), told Sky News television.

"This is extremely emotionally taxing and it's showing its toll on the healthcare workforce."

Johnson has received support during his illness, which has been seen as a clear demonstration of the indiscriminate nature of the virus.

But sympathy could wane as he once again becomes the focal point of the government if issues about gaps in PPE supply and lack of testing persist.

His actions in the early days of the outbreak came in for harsh criticism last week, after he held off introducing strict measures adopted by European neighbours.

The main opposition Labour party leader Keir Starmer accused the government of being "slow into lockdown, slow on testing, slow on protective equipment".

He will also be expected to immediately explain how he plans to get the country's economy up and running again while controlling the spread of the virus.

There have been growing demands for an exit strategy from the current national lockdown, which was first imposed on March 23, extended on April 16 and is due for review on May 7.

Ministers have so far refused publicly to speculate on when restrictions will be lifted, saying that experts were not sure Britain was over the peak of the outbreak.

There have been calls for more clarity, however, including from within Johnson's ruling Conservative party, as the economic consequences of the outbreak become more stark.

Former Tory leader Iain Duncan Smith said the government needed to "bite the bullet and do it", as some businesses began reopening despite the ban.

The Bank of England warned on Thursday that the country faces its worst recession in "several centuries".

Scotland First Minister Nicola Sturgeon also upped the ante by revealing her broader strategy, including the possible phased reopening of some businesses and schools.

By Daniel Trotta (Reuters) - The family of an unarmed Black man who was shot dead by a white store owner in Cincinnati asked the U.S. Justice Department on Wednesday to open a civil rights investigation into the case after the local prosecutor declined to bring any charges. Da'Shawn Tye, 19, was shot at the Mages Grocery in the Ohio city's Price Hill neighborhood on Nov. 19. On Dec. 9, Hamilton County Prosecutor Joseph Deters announced no charges would be filed, saying Tye was attempting to rob the store for the third time. Tye was shot three times, twice in the chest and once in the pelvis, h...