'Box it in': Ex US health chief on how to beat the coronavirus 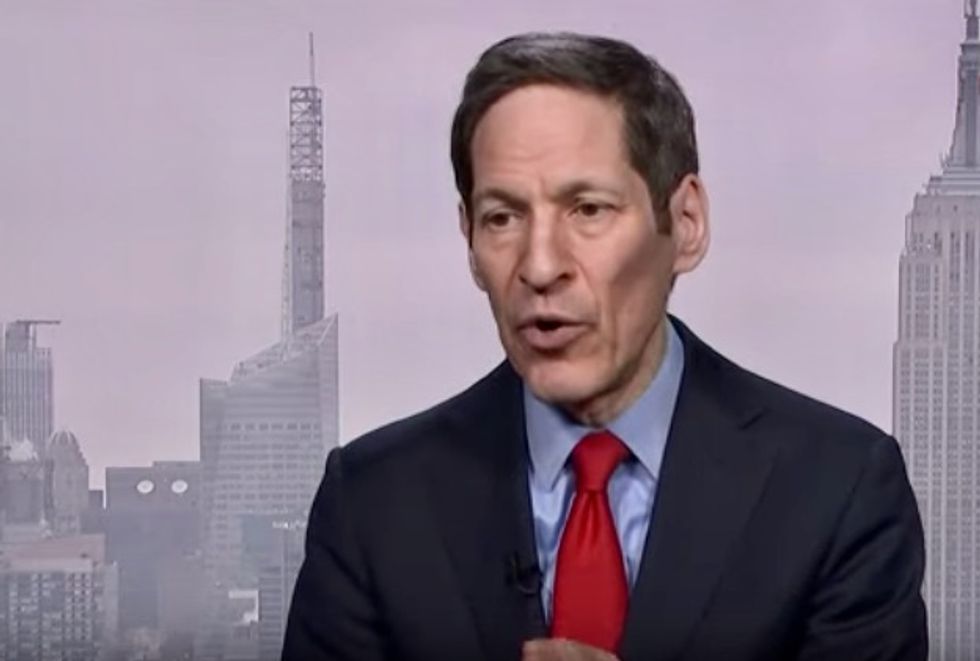 The US may be hitting its peak of coronavirus cases, but it will take an unprecedented public health effort for Americans to return safely to their former lives, according to the ex-head of the Centers for Disease Control and Prevention.

Doctor Tom Frieden, who served as the agency's director from 2009-2017 and currently leads the health nonprofit Resolve to Save Lives, spoke to AFP Wednesday about the road ahead.

The text has been edited for brevity.

How will things shape up for Americans this summer?

The key here is to box it in, and that means strengthening all four corners of that box, the ability to test, the safe isolation of everyone infected, vigorous and extensive contact tracing, and safe and attractive quarantine of those who are exposed.

If we can do those four things, we can put the virus in a box.

Focus on the date rather than the data on how well we're doing those four things is misplaced.

We need to use this time that we're hunkered down in our homes to prepare so that when we come out, we'll be able to stay out.

A Harvard study suggested intermittent social distancing until 2022 would allow the population to accumulate herd immunity in 'off' periods. Do you support this idea?

The idea that we would intentionally allow people to get infected is just misguided, because people have contact with others.

So if you get infected, but you don't get very ill, you may then spread it without knowing to your grandmother or the checkout person at the grocery store

The key here is to develop a systematic and rational way, gradually loosening the faucet so that we can resume activities as soon and safely as possible.

That does mean that older people and medically vulnerable people will need to shelter in place for longer.

Emphasis has been placed on antibody tests that might give us a sense of who is immune, but you've said many already available are "junk" -- why did the Food and Drug Administration approve them?

The FDA hasn't quite found the Goldilocks point where they're doing the right level of assessment of tests.

It's not easy to get the serological tests right and has to be done quite rigorously. And fundamentally we don't know if antibodies will correlate to immunity, and if so for how long?

Viruses can remain inside people's noses long after the infection has passed, which is how common colds continue to spread throughout the year. How might this apply to SARS-CoV-2?

Nasal carriage, as it's called, is a common phenomenon in various viruses and can continue for days or weeks.

Just today there was a report of a patient from China in the media who had a positive after being on quarantine for two weeks and having two negatives at the end of quarantine.

Whether he had a longer incubation period, we don't know. But there's a lot we're still learning about this virus and it's not eradicable, we cannot eliminate it.

When they find a case that pops up, and there's no known source case, they go back around that person to identify the asymptomatic cases.

What will it take to do that here in America?

There are goals of using proximity tracking through apps or cell phones and I'm skeptical that those are going to be successful. But by all means they should be explored as a tool to support contact tracers.

But it's going to take a lot more people than we have. If the ratio is the same as the ratio in Wuhan (where the virus was first detected), it is about 300,000 (workers).

This is traditional, tried and true public health. This is talking to people, treating patients as the VIP of the program, getting their trust, helping them remember, so that we can warn people.

Your thoughts on the US cutting funding to the WHO, and the criticism the WHO has faced?

Every organization can always look back and ask what they could have done differently or better and what went well, but fundamentally, WHO is functioning as it was constructed to do by its member states.

As we come out of this, we can think of whether that construction shouldn't be different and whether they should have more authority than they do.

Their budget isn't much higher than mine was as New York City Health Commissioner, so it's not a particularly well resourced organization.

They've been warning about the dangers of the pandemic for some time and I think WHO's structure makes it difficult for them to be as effective as we would wish.

The CDC has been sidelined by the White House since its early warnings were ignored. How has that impacted the response?