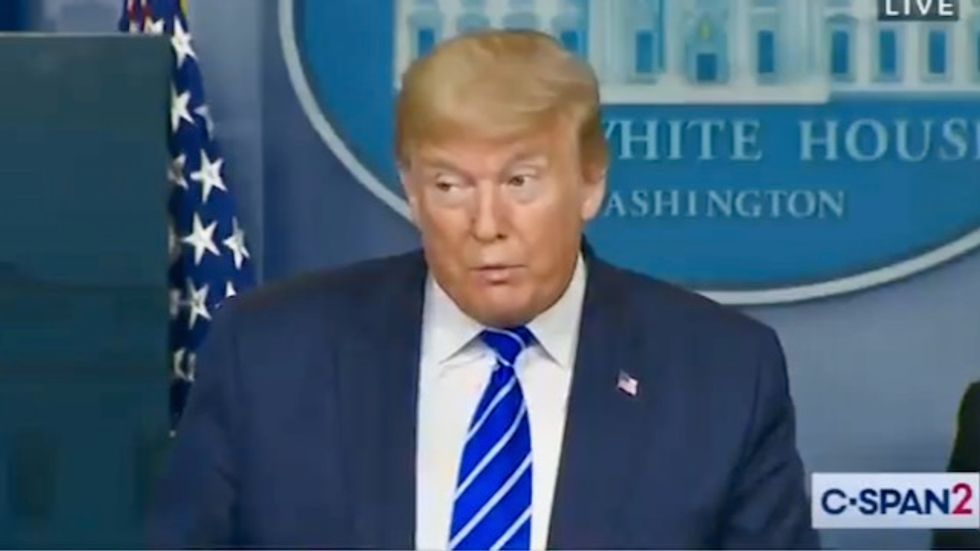 After President Donald Trump made the reckless and preposterous suggestion that disinfectants could potentially be injected as treatment for COVID-19 — an extraordinarily hazardous idea that experts have roundly rejected — his allies at Breitbart News swung into action to defend him. In a "fact check" written by Joel Pollack, the site claimed that it was "false" to say that "Trump suggested injecting people with disinfectant to cure coronavirus," even though he did.

As I pointed out earlier on Friday, this defense was quickly contradicted by the president's own excuse; he told reporters in the Oval Office that his remarks had been "sarcastic" — even though they clearly weren't. Now, Breitbart has updated the piece with a note at the top claiming it was "erroneously" framed as a fact check.

This piece was erroneously framed by our author as a “fact check,” when, instead, it was and should have been framed as an opinion piece. The opinion that the author was trying to convey was his belief that nobody in their right mind would think that Trump was literally suggesting that people should inject disinfectant into their bodies – which is how many in the media were portraying the President’s comments at yesterday’s press conference. The piece has been re-framed as it should have been originally (as opinion), and further updated to reflect President Trump’s statement this morning that he was being sarcastic. We apologize for the error, and you are welcome for all the opportunities to dunk on us on Twitter.

However, the site shouldn't get any kudos for making the update. The updates to the piece now remove the most ridiculous passage from the original version, which I had previously quoted:

Trump used the word “inject,” but what he meant was using a process — which he left “medical doctors” to define — in which patients’ lungs might be cleared of the virus, given new knowledge about its response to light and other factors.

This was a patently ridiculous claim to make in a fact check. But it's also not much better in a piece framed as "opinion," in which the "opinion" expressed is that Trump's critics were factually wrong for saying that he proposed a disinfectant injection. They weren't wrong. Even if Trump somehow meant something entirely other than the words that came out of his mouth, he still said what he said.

Now, Trump has even contradicted Pollack, saying he meant "inject" when he said "inject," but the whole claim was sarcastic, not a serious proposal as Pollack believed (of course, Trump is lying about being sarcastic). So Pollack now admits "the president asked about the potential for a disinfectant injection," which he had previously denied. (Though he also, confusingly, writes: "Trump was far from a model of clarity, but he did not actually propose injecting patients with disinfectant; he deferred to “medical doctors” to figure out how to apply Dr. Bryant’s research.")

And now that Pollack has completely reversed himself on the central feature of the original story — and hey, we can all get things wrong and make ourselves look ridiculous — what's most striking is he still concludes the piece in the exact same way. He writes: "Apparently there is no accusation too crazy for Trump’s critics to believe."

Apparently, there's nothing so outrageous and nonsensical Trump can do that can convince his most stalwart defenders that his critics actually have a point.