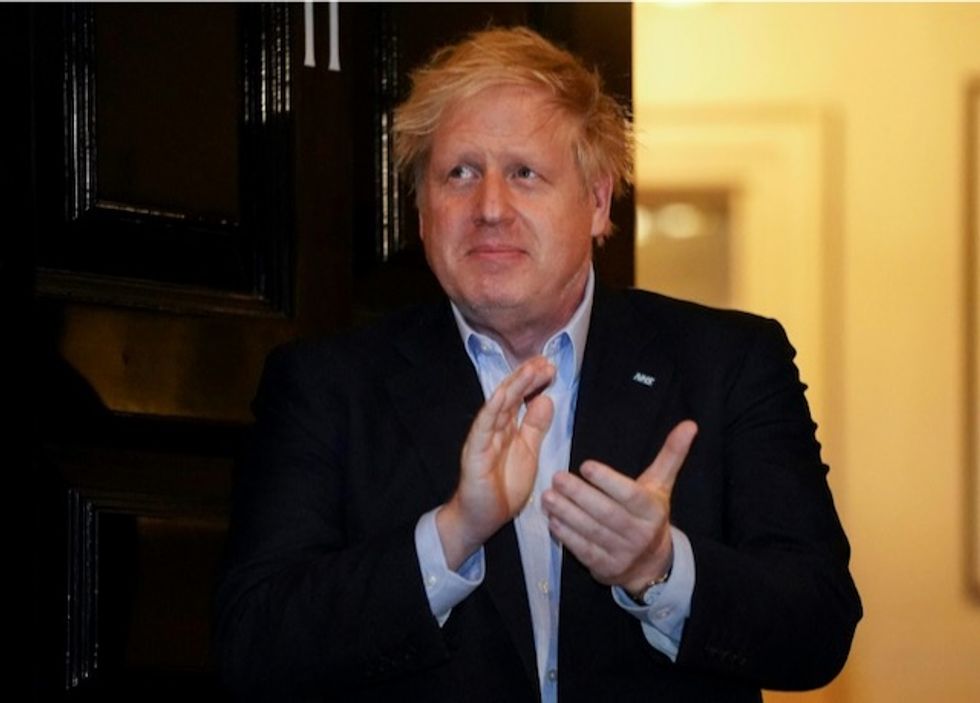 British Prime Minister Boris Johnson's condition was said to be "improving" on Wednesday, as he spent a third day in intensive care battling the coronavirus.

The disease has struck at the heart of the British government, infected more than 60,000 people across nationwide and killed over 7,000, with another record daily toll reported on Wednesday.

"The latest from the hospital is that the prime minister remains in intensive care where his condition is improving," finance minister Rishi Sunak said at a briefing.

"He has been sitting up in bed and engaging positively with the clinical team."

Earlier, Johnson's official spokesman said he remained "clinically stable and is responding to treatment, describing the 55-year-old Conservative leader as being in "good spirits".

The update came as newspapers urged Britons to keep their stricken leader at the forefront of their minds, with a lockdown to try to stem the spread of COVID-19 now in its third week.

"He stayed at work for you... now pray at home for him," The Sun tabloid splashed across its front page. "Boris 'will pull through'" said the Daily Express.

Deputising for Johnson, Foreign Secretary Dominic Raab called him "a fighter" and predicted "he'll be back, leading us through this crisis in short order".

Johnson is the most high-profile government leader to become infected with COVID-19 and messages of support flooded in from across Britain and the world.

He was admitted to intensive care on Monday evening after spending Sunday night in hospital following concerns he still had a cough and high temperature 10 days after being diagnosed with COVID-19.

His transfer to intensive care is unprecedented for a prime minister during a national emergency in modern times.

For many people, it brought home the seriousness of the disease that has so far seen 7,097 deaths in Britain, with a record 938 more reported in a daily update on Wednesday.

There was also a worrying jump in new reported cases to 5,492 after several days of lower figures.

Downing Street said it was still too soon to say whether stringent social distancing measures introduced on March 23 for an initial three-week period would be eased.

A review is expected next week, although Sunak said "our priority right now is to stop the spread of this virus", suggesting the lockdown would be extended.

The country does not have a formal constitutional role of deputy prime minister, and experts said Raab would need the support of the rest of the cabinet to make any big decisions, such as easing the lockdown.

Johnson announced on March 27 that he had coronavirus and went into self-isolation in a flat above his Downing Street office.

He has received messages of support from around the world, with US President Donald Trump sending best wishes to his "very good friend" while Russian leader Vladimir Putin said Johnson's "energy, optimism and sense of humour" would see him through.

For some, Johnson's larger-than-life personality has made his hospitalisation all the more shocking.

His biographer Andrew Gimson said Johnson always made him feel upbeat, and "now here he is the stricken one".

Experts said it was not uncommon for coronavirus patients to move to intensive care, but said it showed Johnson's condition was serious.

The British government was criticised for initially refusing to follow other European countries in requiring people to stay home as the virus spread rapidly across the globe.

Johnson himself said in early March that he was still shaking hands with people.

Two weeks ago, he ordered a nationwide lockdown, but parliament continued to sit for several days after and Westminster became a hotspot for the virus.

Health Secretary Matt Hancock and the heir to the throne, Prince Charles, have both been infected, although they have since recovered.

Meanwhile, Number 10 also revealed on Wednesday that it expected its chief Brexit negotiator David Frost to speak early next week to his European Union counterpart Michel Barnier to agree a timetable for "remote" talks in April and May.