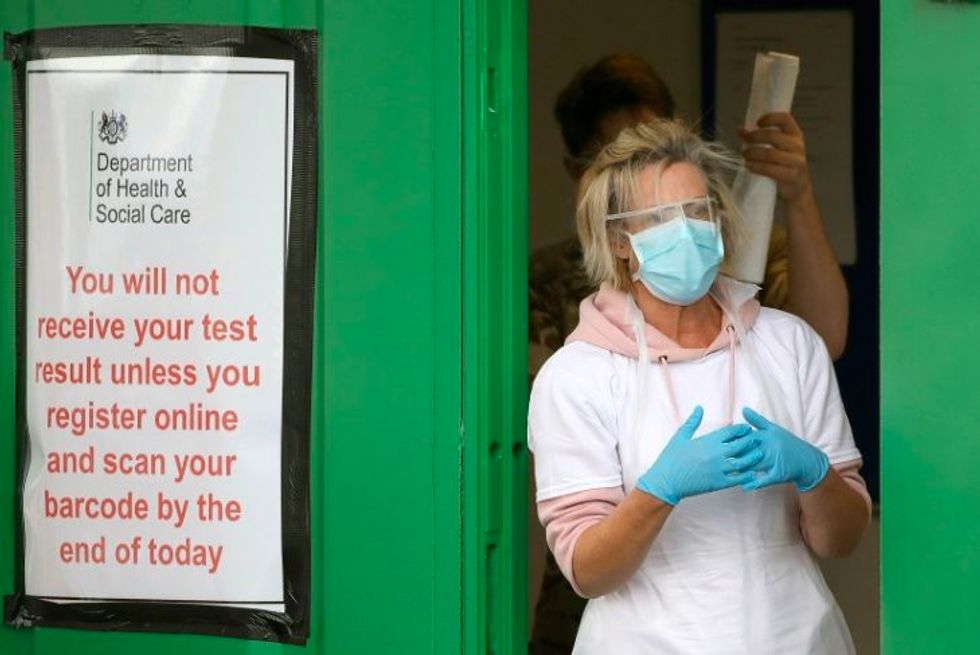 Britain's death toll from the coronavirus outbreak jumped to 26,097 on Wednesday -- the second-highest in Europe behind Italy and third-highest in the world -- as the government took into account fatalities outside hospital, including care homes, for the first time.

The increase came after surprise news that Prime Minister Boris Johnson had become a father again at age 55, several months earlier than expected, and just weeks after he was taken to hospital with COVID-19.

Downing Street announced that his partner, Carrie Symonds, 32, gave birth to a healthy baby boy, prompting messages of congratulation from across the political spectrum at home and abroad.

The rare good news was soured however by the additional 4,419 deaths in the overall coronavirus death toll, just as Johnson, who returned to work on Monday, is under pressure to ease a month-long lockdown.

AFP / DANIEL LEAL-OLIVAS Members of the London Fire Brigade prepare to load bags of donated food onto their fire engine, at a temporary food bank in London

Until now, Britain had reported only deaths of people who had tested positive for COVID-19 in hospital but there has been mounting concern about high numbers of unreported victims in the wider community.

On Tuesday, the Office for National Statistics said deaths registered in England and Wales in the week ending April 17 were running at roughly double the five-year average and were the highest weekly total since 1993.

Foreign Secretary Dominic Raab on Wednesday said there were an additional 3,811 deaths included in the outbreak since the start of March, on top of figures from the last 24 hours.

"They don't represent a sudden surge in the number of deaths," he told reporters.

According to an AFP tally from official sources at 1300 GMT on Wednesday, Britain has now leapfrogged the tolls in France and Spain and is the second-worst affected country in Europe, behind Italy's 27,359 deaths.

The United States has the world's worst death toll with 58,355.

Britain has widened its testing regime for COVID-19 to care homes, the over-65s and people unable to work from home, as part of increased measures to curb the outbreak.

A total of 85 frontline workers in the state-run National Health Service (NHS) have died from the coronavirus, and 23 in social care, according to the government.

There remain questions about the provision of personal protective equipment to medics and others dealing with patients, and the availability of testing.

Raab, who has deputised for Johnson during his illness and recovery, warned the government is not yet ready to ease lockdown restrictions.

"This issue of a second spike and the need to avoid it, it's not a theoretical risk," he said.

"Having relaxed restrictions in Germany over the last week, they've seen a rise in the transmission rate of coronavirus.

"We're in a delicate and dangerous moment. We're coming through the peak, but we're not there yet."

Britain shut non-essential shops and services, and ordered people to stay at home except to shop for groceries and medicines, on March 27.

A review of the measures is expected on May 7, amid dire warnings about the economic impact and indications of frustration at the continued confinement.

Johnson held a lunchtime telephone call with the leader of the main opposition Labour party, Keir Starmer who has called for more clarity on the lockdown exit plan.

Starmer earlier joined well-wishers in congratulating Johnson on becoming a father again, particularly after his recent experience. Symonds also displayed COVID-19 symptoms but was not tested.

"Whatever differences we have in this house, as human beings we all recognise the anxiety the prime minister and Carrie must have gone through in these past few weeks," he told parliament.

"I really hope this brings them incredible relief and joy."

Johnson had to spend three nights in intensive care, and later admitted his illness "could have gone either way".

He was present for the birth at an unnamed NHS hospital in London and would be taking some paternity leave later in the year, his spokesman said.

Johnson has at least five other children, including four with his second wife, Marina Wheeler, from whom he split in 2018.

He also had a daughter as a result of an extra-marital affair while he was mayor of London, according to a 2013 court case.

The news of his youngest child's birth came as a surprise, as Symonds was not thought to be due for several weeks.

Both she and the baby were said to be doing "very well".