‘Charlatan’ Dr. Phil slammed for saying ‘we don’t shut the country down’ for cigarette smoking and car accidents 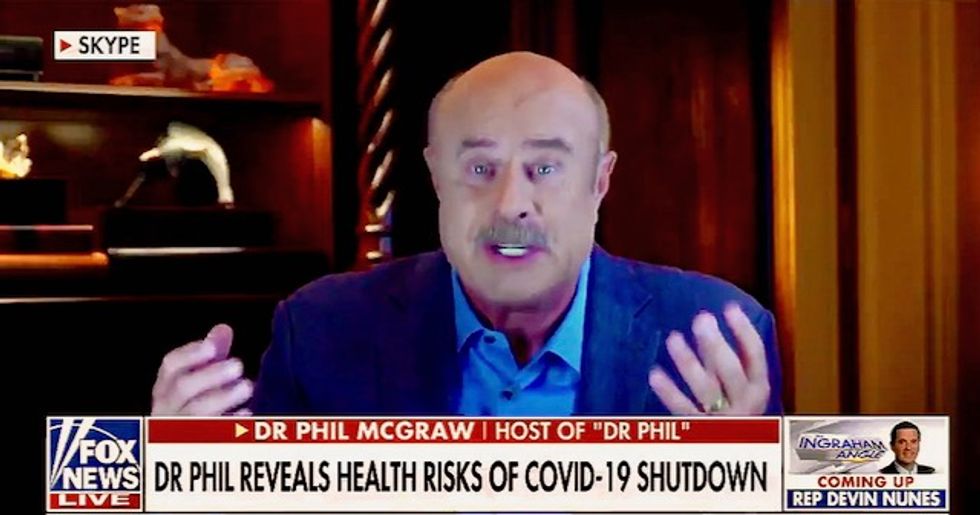 'Charlatan Who Kills People With Pseudoscience'

Dr. Phil is the second TV doctor this week to appear on Fox News, spew out an astonishingly frightening claim to support their belief the country should not shut down over the deadly coronavirus pandemic, and be met with massive anger and outrage. Dr. Oz on Wednesday proclaimed that re-opening schools would add "only" an additional two or three percentage points to the coronavirus death toll.

Laura Ingraham on Thursday brought Dr. Phil to her Fox News viewers, after she herself argued to Dr. Anthony Fauci that the country didn't shut down over HIV/AIDS so why should we shut down now. It's unclear if she understood his response.

She was widely mocked on social media.

Dr. Phil's arguments were met with even more disdain and disgust, not only because they clearly show his lack of understanding of the coronavirus danger, but also because his facts were just plain false.

“250 people a year die from poverty," Dr.Phil told Ingraham. It's unclear where that number came from but he likely meant 250,000. (In 2000 the number was 133,000.) "And the poverty line is getting such that more and more people are going to fall below that because the economy is crashing around us. And they’re doing that because people are dying from the coronavirus. I get that.”

"We don’t shut the country down for that but yet we’re doing it for this? And the fallout is going to last for years because people’s lives are being destroyed.”

As many noted, car and swimming pool accidents and cigarette smoking are not contagious, coronavirus is. Researchers believe if left unchecked by social distancing and other means, every person who is infected with coronavirus spreads it to between 3 and 6 other people.

"Dr. Phil" has been trending on social media for hours now.

Take a look at some of the responses.

The most meaningful thing Oprah could do to help right now would be to publicly disavow Dr. Phil and Dr. Oz. https://t.co/M3ErslMNqS
— Kate Aurthur (@Kate Aurthur) 1587102794.0

I would suggest Dr. Phil do what some other doctors are doing, and volunteer to help out in overburdened hospitals… https://t.co/NkfLPBN7l1
— Bill Kristol (@Bill Kristol) 1587124145.0