Coronavirus intensive care -- what is involved? 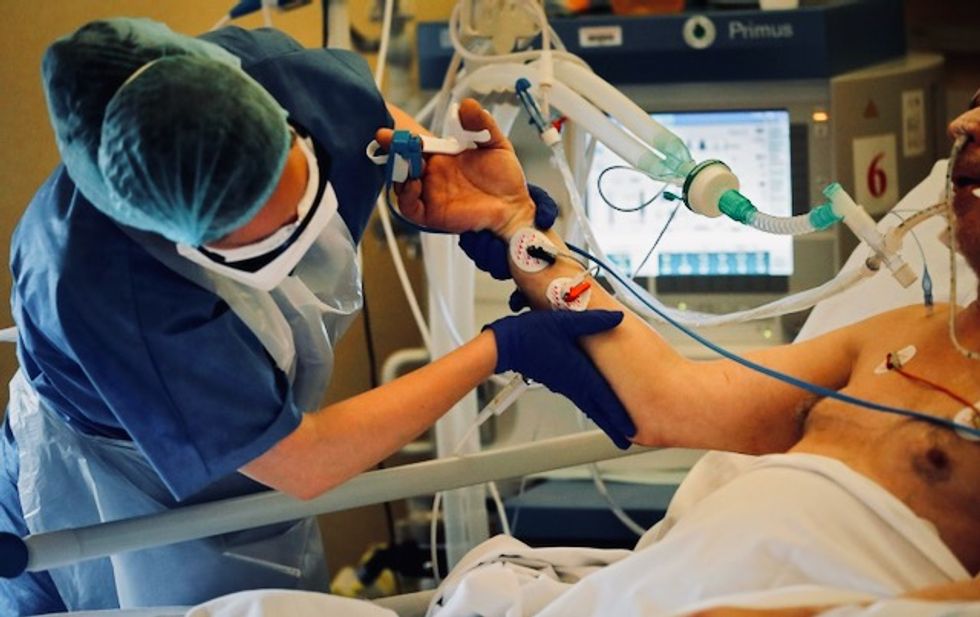 The coronavirus pandemic has caused many thousands of people, including Britain’s prime minister, to need treatment in intensive care units, where severe cases of COVID-19 often receive breathing support.

Boris Johnson was moved into intensive care when his condition worsened on Monday, 10 days after diagnosis -- a typical progression as the virus begins to attack the lungs, reducing the amount of oxygen going to the body and its vital organs.

Failure to at least halt COVID-19 will lead to organ failure and death but keep the patient alive long enough, and they stand a chance of overcoming it and pulling through.

Here is a summary of what is involved in intensive care treatment:

Q: Who ends up in intensive care?

Life support is reserved for patients suffering from severe respiratory failure resulting from the lungs being affected by the virus.

The World Health Organization (WHO) estimated at the end of February that in China some 20 percent of infections resulted in severe cases -- 6.1 percent who were critical, as well as 13.8 percent deemed severe.

Admission depends on the seriousness of the symptoms -- as well as the availability of beds.

In Italy, a March estimate put the number of confirmed cases requiring intensive care at 12 percent.

So far in countries that have had outbreaks, figures show that the vast majority of serious cases are in men.

British data from 2,621 patient admissions to intensive care up to April 3, showed that 73 percent were men, with an average age of 60.

"It is becoming increasingly recognised that there are substantial differences in the immune system between males and females and that these have significant impact on outcome from a wide range of infectious diseases," said Philip Goulder, Professor of Immunology in the Department of Paediatrics at the University of Oxford.

He said lifestyle and social factors could also be involved, including smoking "which affect the level of pre-existing disease such as heart disease, chronic lung disease and cancer."

Q: What is involved in looking after intensive care COVID-19 patients?

The guiding principle of intensive care is to help patients whose vital organs -- heart, lungs, kidneys -- are at risk and need immediate and constant help.

In COVID-19 cases, it is the lungs which come under attack, with patients struggling to get enough oxygen, often deteriorating very quickly as a result.

This deterioration "can happen very quickly between the eighth and tenth day of the illness, often in the space of just a few hours," Dr. Albrice Levrat, head of intensive care in the eastern French city of Annecy, explained to Le Point weekly.

In the first instance, the patient is given oxygen through tubes to the nose, progressing to a pressurized full face mask.

If that does not work, then medical staff with turn to mechanical ventilation, which requires the patient to be sedated heavily.

A tube is then inserted through the trachea to carry oxygen directly into the lungs as a machine effectively takes over the patient's breathing.

AFP / THOMAS COEX The guiding principle of intensive care is to help patients whose vital organs -- heart, lungs, kidneys -- are at risk and need immediate and constant help

Intubation is a major medical procedure which can last for several weeks, requiring an entire medical team to monitor and adjust as required until the patient can breath on their own again unaided.

Some doctors have resorted to a new technique: they artificially oxygenate blood by extracting it with a machine and then returning it into the body.

Q: What is the prognosis for intensive care patients?

Despite the heroic efforts of medical staff, the figures for COVID-19 survival and recovery in intensive care, especially when it proceeds to mechanical ventilation, make for grim reading.

British statistics suggest that perhaps half of all patients going into intensive care die, especially if they are elderly and have other underlying conditions.

For example, among those patients aged 70 or over, the figures showed more than 68 percent died; for the 50-69 age bracket it was nearly 46 percent but fell to more than 23 percent for the 16-49 group.