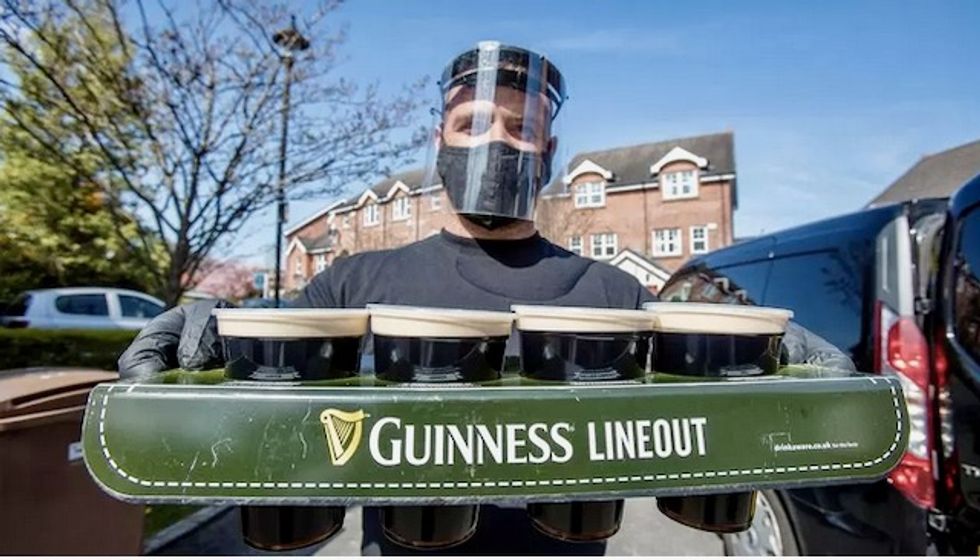 "People are delighted to see you," said pub manager Richard Keenan. "You're driving around all day with the biggest smile on your face."

His pub, The Hatfield House, has redeployed bar staff to four vans, freshly installed with refrigerated kegs and bar taps.

The sleek vehicles have been traveling the length and breadth of Belfast, delivering 300 pints of Guinness a day by appointment.

Staff clad in masks, visors and gloves disembark and open the back doors to pour pints in plastic cups.

They leave them at a safe distance for customers to collect -- in strict observance of social distancing guidelines designed to stem the spread of the virus which has killed more than 13,000 people across Britain.

Although "the black stuff" can be bought in cans, connoisseurs of the Irish stout insist it tastes vastly different when properly served -- in an unhurried, two-part pour from a pub tap.

"There's something about Guinness. It's in our DNA over here," said Keenan.

"Cans are great, but they're not pints. There is something about that, like an intrinsic value in what it is."

When Prime Minister Boris Johnson announced the first stage of Britain's lockdown last month, ordering pubs and cafes to close, he acknowledged how "extraordinary" it was.

"We're taking away the ancient inalienable right of freeborn people of the United Kingdom to go to the pub," he said.

But the closure of pubs -- a main pillar of Britain's hospitality industry -- carries serious economic ramifications.

Industry body Hospitality Ulster estimates one in 20 jobs in Northern Ireland are in the now largely defunct hospitality sector.

"The hospitality industry is the worst financially impacted by the coronavirus, and most likely the hardest of all sectors to rebuild and reopen," wrote chief executive Colin Neill in a letter to regional ministers last week.

Activist group the Campaign for Real Ale (CAMRA) also estimates 50 million pints will be thrown away, as 15 barrels of beer expire in each of the United Kingdom's 39,000 pubs.

But the benefits of pubs are measured in more than money. "They bring people together," said CAMRA chief executive Tom Steiner.

"They give people a place to socialise. They bring a lot of well-being benefits. They help combat loneliness and isolation."

A few days after closing pubs, Britain followed other countries in ordering everyone to stay at home to stop the spread of coronavirus -- an order that has now been extended into next month.

For Keenan, the Guinness delivery service can act as some small response, "spreading a little bit of joy" in dark and uncertain times.

"There's a lot of people buying them for their wee dad who's in the house and can't get out," he said. "That was his sort of social life -- getting out for his pint once a week."

At times like these that reminder of regular life is proving welcome for those of all ages.

"It's things like this you miss," said finance worker David Ferguson, 43, taking delivery of three pints in his front garden.

"This kind of cheers you up, I suppose mentally it's good."

"But it's really the taste isn't it," he added wryly, taking a hearty sip.