Elizabeth Warren: Trump is 'trying to turn this health crisis into a political rally for himself' 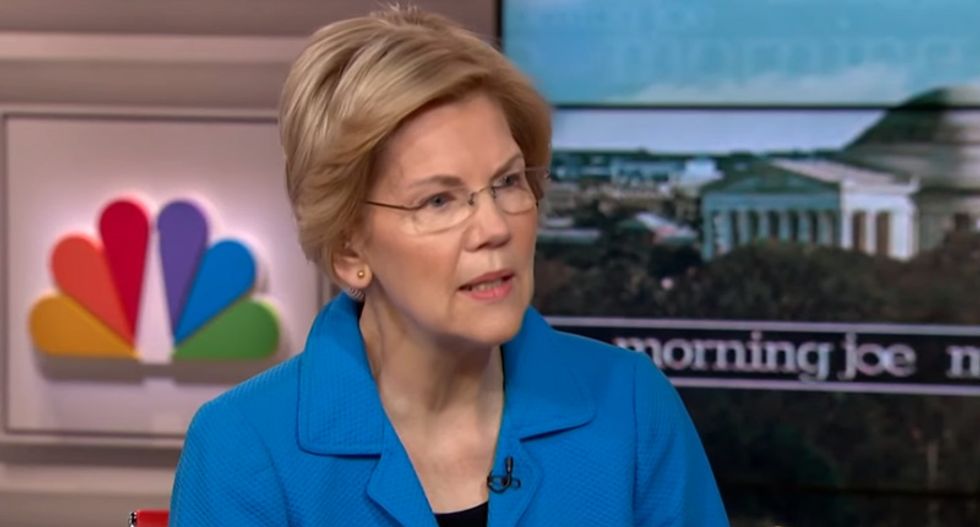 Democratic lawmakers have joined with advocacy groups in criticizing President Donald Trump for encouraging recent protests against stay-at-home orders enacted by state and local governments in response to the ongoing coronavirus pandemic—including Sen. Elizabeth Warren, who accused the president of using the COVID-19 crisis to garner voter support.

In a Saturday appearance on MSNBC's "AM Joy," the Massachusetts Democrat declared that during this crisis, Trump has failed in his responsibility to keep Americans safe.

"He has failed abysmally in that, and he has also failed just in the notion of what he's telling people, saying liberate, free Michigan, Virginia, encouraging people to come out and trying to turn this health crisis into a political rally for himself," Warren told host Joy Reid, referencing Trump's Friday tweets about the protests.

After dozens of demonstrators on-foot and thousands of people in their vehicles descended on the Michigan Capitol Wednesday with signs that read "Liberty once lost is lost forever" and "Security without liberty is called prison" to protest Democratic Gov. Gretchen Whitmer's stay-at-home order, Rep. Debbie Dingell (D-Mich.) called the event "inescusable."

Dingell added to her criticism of the "Operation Gridlock" protest during a Saturday appearance on MSNBC's "Weekends With Alex Witt." The congresswoman emphasized the importance of preventing more deaths from COVID-19 and urged against politicizing the pandemic and containment measures.

As for Trump encouraging the protests throughout the country, Dingell warned "adding this kind of kerosene to a tinderbox is very dangerous" and said that she connected with "a lot of people on both sides of the aisle" to express her concerns and call for political unity in the fight against the pandemic.

Reporting Saturday on a protest outside the Texas Capitol building in Austin, the New York Times noted:

The rally rode a wave of similar protests at statehouses and in city streets this past week, with people also gathering on Saturday in Indianapolis; Carson City, Nevada; Annapolis, Maryland; and Brookfield, Wisconsin. As some governors expressed interest in reopening their states, some prominent local conservatives turned to Facebook groups and other social media to set up protests.

In Austin, the Times reported, "there were Trump signs, flags, caps, and T-shirts. There were loud chants of 'Let us work! Let us work!' but also 'Fire Fauci! Fire Fauci!'" Anthony Stephen Fauci is the director of the National Institute of Allergy and Infectious Diseases and a lead member of the White House Coronavirus Task Force.

Over the past week, there have also been protests against stay-at-home orders in Huntington Beach, California as well as at the statehouses in New Jersey and Virginia. A Republican state lawmaker is organizing a "Re-Open Maine" Convoy and Parade for Monday outside the Governor's Mansion in Augusta.

Trump came under fire Friday for proclaiming in a series of tweets, "LIBERATE MINNESOTA!" and "LIBERATE MICHIGAN!" He added: "LIBERATE VIRGINIA, and save your great 2nd Amendment. It is under siege!" The latter comment was an apparent reference to gun control measures recently signed by Democratic Gov. Ralph Northam.

The criticism continued throughout the weekend, with Rep. Barabara Lee (D-Calif.) tweeting Sunday morning that "Trump is *literally* trying to incite violence in states across the country. It's despicable how low he’ll sink to score political points."

Following the president's tweets, he was asked during a Friday press briefing: "Sir, are you concerned, though, that people coming out in protest are going to spread COVID to other people? They're congregating in ways that health experts have said they should not."

Trump responded: "No, these are people expressing their views. I see where they are and I see the way they're working. They seem to be very responsible people to me, but it’s—you know, they've been treated a little bit rough."

The president stopped short of saying that the states seeing protests should lift their stay-at-home orders but said "I think elements of what they've done are too much."

Later in the briefing Fauci was asked: "Does that concern you though, as a health expert, when you see folks congregate? And are you worried if that's encouraged?"

Fauci said: "Well, I mean, I'm looking at it from a public health standpoint. I certainly could understand the frustration of people, but my main role in the task force is to make recommendations to protect the health and the safety of the American people. And I would hope that people understand that that's the reason why we're doing what we're doing, and hopefully we'll put an end to this."