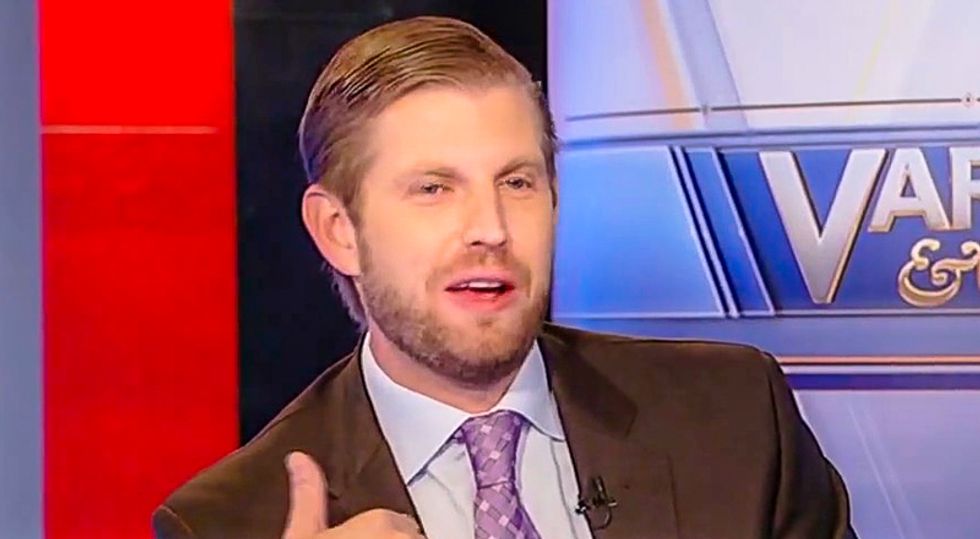 Eric Trump appears on Fox Business (screen grab)
The Trump Organization has asked the Trump administration for a break on rent payments to its Washington hotel amid the coronavirus pandemic.The economic fallout from the pandemic has scoured the tourism and hospitality industries, but Congress blocked the Trump Organization from dipping into the initial $500 billion coronavirus relief fund.

"Just treat us the same," Eric Trump said. "Whatever that may be is fine."

The Trump Organization signed a 60-year lease to redevelop the Old Post Office. Eric Trump — who helms the company with Don Jr., his older brother — confirmed Tuesday to The New York Times that it had asked the General Services Administration (GSA) about changing the terms on its $268,000 monthly payments during the pandemic.

The GSA is the federal government agency which manages the hotel's lease. The president appoints its leader, and he has not divested from his family business.

The Washington Post reported earlier this month that 17 Trump properties have shuttered amid the pandemic, and 1,500 employees at its U.S. and Canada hotels had been laid off or furloughed. The properties on average pulled in about $650,000 for the president per day, according to a Post analysis of Trump's financial disclosures.

Trump Organization officials have also approached the president's largest creditor, Deutsche Bank, about adjusting payments on its $300 million debt, The Times reported. And the company has asked officials in Palm Beach County for leniency after Trump International Golf Club missed the due date for its $88,000 payment on property it leases from the government.

Though the Trump Organization qualified for a Paycheck Protection loan from the Small Business Association, worth up to $10 million, a company official said it would not apply. The loan program requires businesses to rehire employees.

The Washington hotel has been a magnet for foreigners with interests in the U.S. government, many of whom often patronize the hotel and restaurant when they visit the city. The government initially found nothing prohibitive about Trump's leadership, but last year the GSA's inspector general said the agency ignored key constitutional questions.

"We found evidence that the term 'emolument' as used historically and today includes the gain from private business activities," the report said.

A federal appeals judge in February dismissed an emoluments lawsuit brought by more than 200 Democratic officials on grounds that the group lacked standing. The organization put the hotel lease on the market last year, citing the negative attention and possible profits. However, the pandemic has tanked any prospects.

"I wouldn't say you're thriving when you decide to close down your hotels and your businesses," Trump told White House reporters when asked in late March whether the pandemic had impacted his bottom line.