Eric Trump's wife and Donald Trump Jr.'s girlfriend are on the 2020 campaign manager's payroll — at $15K a month 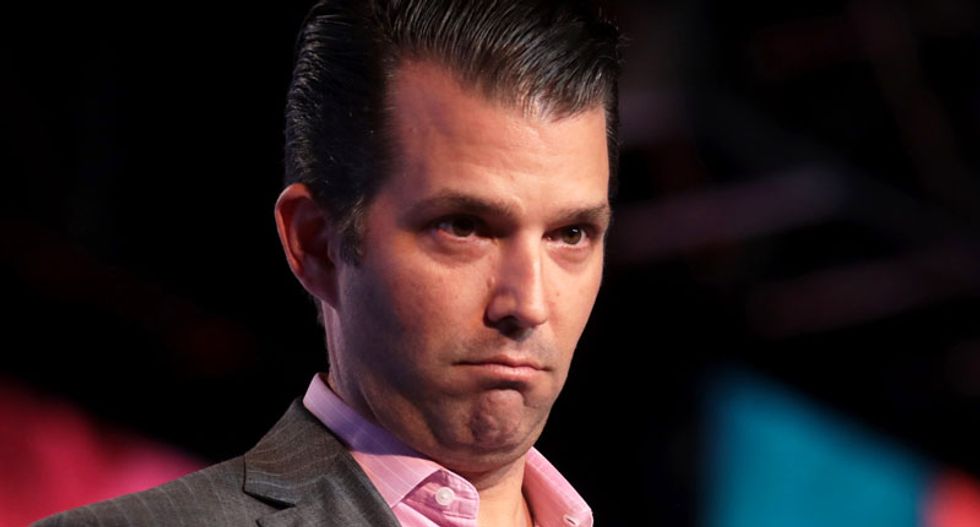 President Trump's campaign manager, Brad Parscale, has been paying $15,000 a month — the equivalent of the top White House salary — to Lara Trump and Kimberly Guilfoyle, the wife and girlfriend of Eric Trump and Donald Trump Jr., respectively, for campaign work.

The payments, the existence of which was revealed in March by the New York Times, reportedly came through one of Parscale's private companies, Parscale Strategy.

It's unclear why the campaign didn't pay the pair directly, but the payments would allow the campaign to sidestep federal election rules that require it to publicly disclose all spending.

"I can pay them however I want to pay them," Parscale told Huffington Post, which first revealed the amount of the payments.

It's unclear when the payments began, and though Huffington Post did not specify which of Parscale's firms was making them, the Times report cited two sources that named Parscale Strategy. (Guilfoyle was reportedly overheard complaining to Parscale that her checks were late.)

These payments reveal how the murky web of campaign finance has become even murkier in the Trump era, and how easy it is to blur individual roles, organizational hierarchies and payment flows to live between the famously fuzzy lines of federal election law.

Parscale has also operated at least two other firms: the now-defunct Giles-Parscale; and Red State Data and Digital, which has purposely ambiguous financial connections to the campaign and affiliated groups.

In 2017, the AP reported that Giles-Parscale (not Parscale Strategy) had hired Lara Trump as a "liaison," a job the Raleigh News & Observer later specified as comprising "digital, fundraising, and merchandising efforts."

It's unclear whether Lara Trump left Giles-Parscale, but she received the alleged $15,000 monthly payments from Parscale Strategy separately. Parscale sold his half of Giles-Parscale for a reported $10 million in mid-2017. (The 2016 Trump campaign had paid the company $94 million.) Financial records from America First Policies do not show that the group made any payments to Giles-Parscale that year.

Parscale Strategy has since been paid more than $37.8 million from a range of clients, according to the ethics watchdog group CREW, including the Trump campaign, the RNC, joint fundraising committees and the America First Action Super PAC.

A third Parscale firm, Red State Data and Digital, has been paid a combined $3.3 million by America First Action and its dark-money affiliate America First Policies, according to CREW.

Lara Trump's $15,000 monthly payments float somewhere in the nexus between Parscale Strategy and its clients — the Trump campaign, America First Action, the RNC and the nominally unaffiliated America First Policies.

Guilfoyle also has several direct connections to Parscale's firms. CREW reported that in the weeks leading up to the 2018 midterm elections, America First Policies — a Parscale client — ran a series of digital ads featuring Guilfoyle and Donald Trump Jr. Those ads did not name candidates, but ran in locations where races were tight.

A former Fox News personality, Guilfoyle left the network in 2018. She began dating Donald Trump Jr. two years ago and began joining him at campaign events. In a 2019 press release, Parscale announced that Guilfoyle would join the Trump campaign as a senior adviser.

The RNC had paid Parscale Strategy millions for digital ads, payments it reportedly suspended at Parscale's request in September of last year. In January of this year, Guilfoyle became the head of Trump Victory Committee, a joint fundraising committee shared between the Trump campaign and the RNC.

In August 2018, former Trump adviser Omarosa Manigault-Newman released a tape of Lara Trump offering her $15,000 a month for a "campaign job" in December 2017, immediately after Manigault left the White House. At the time, Lara Trump was an adviser to the campaign but had also reportedly been holding high-level meetings at the White House, a move experts believe is illegal. Manigault considered the proposed payment to be hush money.

"It sounds a little like, obviously, that there are some things you've got in the back pocket to pull out," Lara Trump said on the tape. "Clearly, if you come on board the campaign, like, we can't have, we got to —"

In another passage from the tape, Trump explains that the offer was intended to reflect Manigault's White House salary.

"So, I know you, you were making 179 at the White House. And I think we can work something out where we keep you right along those lines," Trump said. "Specifically, let me see, I haven't even added up the numbers. But we were talking about, like, 15K a month. Let me see what that adds up to. Times 12. Yeah. So that's $180,000. Does that sound like a fair deal for you?"

According to ABC News, either the Trump campaign, the RNC or America First Action are also paying former presidential security chief and Trump bodyguard Keith Schiller $15,000 a month for "security services" connected to the 2020 Republican National Convention. Another Trump adviser, John McEntee, who left the administration in 2018 because of a gambling addiction, was hired by the campaign at $14,000 a month hours after he walked out of the White House. The campaign also offered $15,000 a month to former ad director Gary Coby.

Trump reportedly charges donors $15,000 for a photo with him.