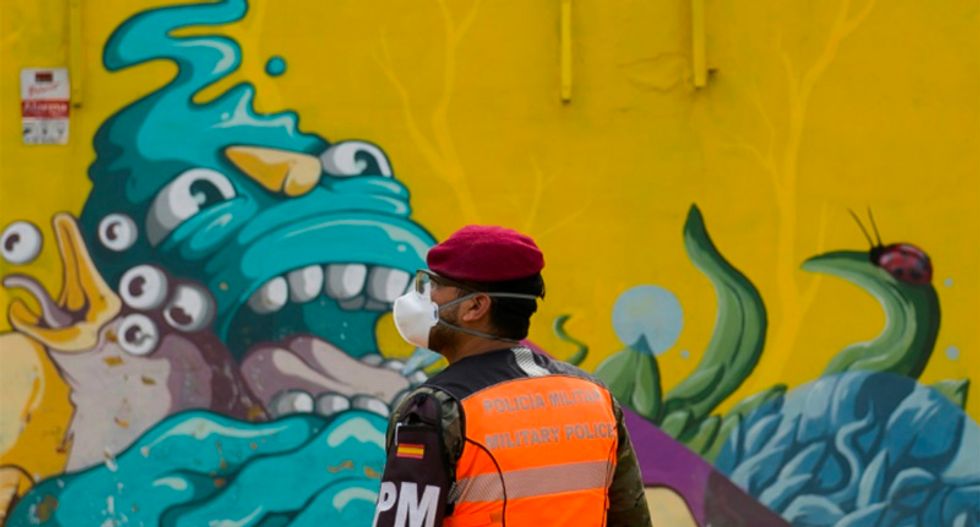 European nations hard hit by the coronavirus and the US epicenter New York reported headway Sunday in their battle against the deadly pandemic.

Governments across the world are now debating how and when to ease lockdowns that have kept more than half of humanity -- 4.5 billion people -- confined to their homes and crippled the global economy.

The continent accounts for almost two-thirds of the 160,000 fatalities reported across the globe out of more than 2.3 million declared infections, according to an AFP tally.

And in the United States -- the country with the highest number of deaths and infections -- the governor of New York said the outbreak was "on the descent."

Mounting evidence suggests that the lockdowns and social distancing are slowing the spread of the virus that first emerged in China last year.

The tentatively hopeful signs come with the US and China locked in a spat over suggestions by President Donald Trump that a laboratory in the ground zero city of Wuhan may have spawned the pandemic.

The authorities are even starting to shut some makeshift facilities set up to relieve the overburdened health system, including a morgue at a Madrid ice rink.

Spain has extended a nationwide shutdown but said it would soon ease restrictions to allow children time outside.

A patchwork of countries on the continent including Switzerland, Denmark and Finland have already begun reopening shops and schools.

Germany is set to follow suit Monday with some shops back open after declaring the virus "under control", while Italy -- at one time the European epicenter of the crisis -- was tentatively mulling easing restrictions.

AFP / Hector RETAMAL A bride poses for a wedding photographer on East Lake in Wuhan, the city where the virus first emerged in December

And France said a nationwide lockdown in force for a month was beginning to bear fruit, with death tolls and hospitalizations declining.

"We are scoring points against the epidemic," said French Prime Minister Edouard Philippe, while insisting "we are not out of the health crisis yet".

In Britain, the government of Prime Minister Boris Johnson -- who is himself recovering from the virus -- faced fresh criticism over his early response to the crisis and shortages of protective equipment.

The US has the highest caseload of any country, with more than 735,000 confirmed infections, and over 39,000 deaths.

But in New York state, which has borne the brunt of the virus, Governor Andrew Cuomo was optimistic.

"We are past the high point, and all indications at this point is that we are on the descent," he told a press conference.

Resentment is rising as Americans and others around the world chafe after weeks under stay-at-home orders.

Hoping to spread cheer to those under lockdown, top musicians -- from the Rolling Stones to Taylor Swift, Stevie Wonder and teen superstar Billie Eilish -- joined forces for a virtual mega-concert.

But many of the world's 260 million Orthodox Christians were forced to mark Easter at home Sunday, with church leaders telling worshippers to stay indoors and conducting services online or on television.

China meanwhile hit back at Trump after he questioned the origins of the highly contagious disease which Chinese scientists say was probably first transmitted to humans at a Wuhan market where exotic animals were slaughtered.

"Was it a mistake that got out of control or was it done deliberately?" Trump said Saturday.

"If they were knowingly responsible, yeah, then there should be consequences."

Conspiracy theories that the virus came from a maximum-security virology lab have been brought into the mainstream by US government officials.

Secretary of State Mike Pompeo said an investigation was under way into how the virus "got out into the world".

"There's no way this virus came from us," Yuan Zhiming, the head of the P4 laboratory at the Wuhan Institute of Virology, which is equipped to handle dangerous viruses, said in an interview with state media.

"I know it's impossible."

Australia has called for an independent investigation into the global response to the pandemic, including the World Health Organization's handling of the crisis and China's actions.

Trump has already withdrawn US funding to the WHO, accusing it of "severely mismanaging and covering up" the spread of the virus.

With 22 million Americans out of work as businesses closed, families are turning to food banks to get by, waiting hours for donations in long lines of cars.

And in poorer and more densely populated parts of the world, many governments are still struggling to enforce restrictions on movement that are piling misery on the needy and spreading hunger.

The virus has also thrown the spotlight on care homes, with a UK charity warning the death tolls in such facilities in Britain could be five times higher than the official numbers.

Separated from relatives for fear of their spreading infection -- and from neighbours who have already fallen to the outbreak -- some in the care homes fear death from loneliness.

"It's gloomy to not be able to see anyone. To be all alone. You fear the worst in moments like these," said Marc Parmentier, 90, a resident at a care home outside Brussels.