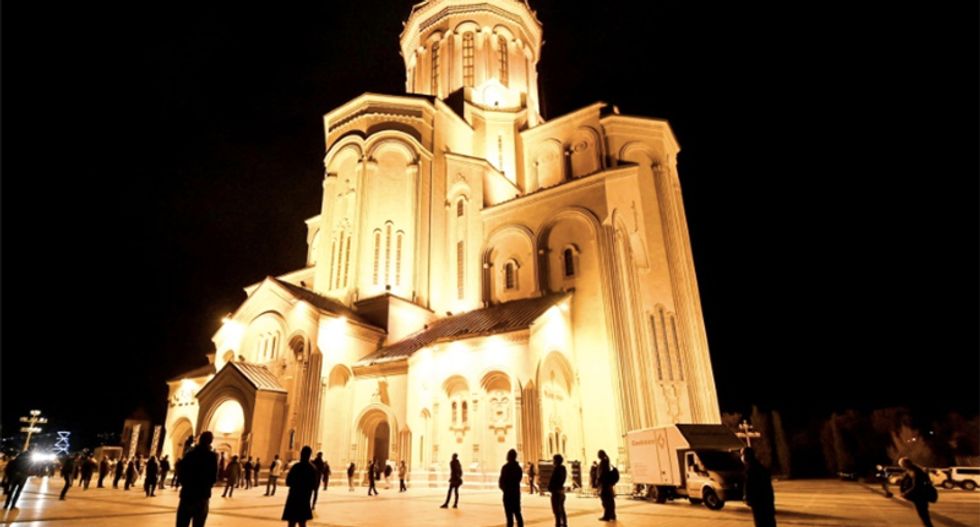 Georgian Orthodox believers, observing social distancing, attend a service on the eve of Orthodox Easter in Tbilisi as the country tries to curb the spread of the novel coronavirus (Photo: AFP / Vano SHLAMOV)

Hard-hit European nations began preparing for a slow reopening and the US epicenter New York reported headway Sunday in their battle against the deadly pandemic.

Governments across the world are now debating how and when to ease lockdowns that have kept more than half of humanity -- 4.5 billion people -- confined to their homes and crippled the global economy.

The continent accounts for almost two-thirds of the nearly 165,000 fatalities reported across the globe out of more than 2.3 million declared infections, according to an AFP tally.

In the United States -- the country with the highest number of deaths and infections -- New York Governor Andrew Cuomo said the outbreak was "on the descent," though he cautioned that it was "no time to get cocky."

Mounting evidence suggests that the lockdowns and social distancing are slowing the spread of the virus. That has intensified planning in many countries to begin loosening curbs on movement and easing the crushing pressure on national economies.

Hard-hit Spain has extended a nationwide shutdown but said it would ease restrictions to allow children time outside. Switzerland, Denmark and Finland all began reopening shops and schools.

Germany will allow some shops to reopen Monday after declaring the virus "under control," while Italy -- once the hardest-hit European country -- mulled easing restrictions.

Iran, which has the Middle East's deadliest outbreak, allowed some "low-risk" businesses to reopen Saturday.

The tentatively hopeful signs come with the United States and China squabbling over suggestions by President Donald Trump that a laboratory in the ground zero city of Wuhan may have spawned the pandemic. The lab rejected such theories as "impossible."

The authorities are even starting to shut some makeshift facilities set up to relieve the overburdened health system, including a morgue at a Madrid ice rink.

France said a nationwide lockdown in force for a month was beginning to bear fruit, with death tolls and hospitalizations declining.

"We are scoring points against the epidemic," said Prime Minister Edouard Philippe, while insisting "we are not out of the health crisis yet."

In Britain, the government of Prime Minister Boris Johnson -- himself recovering from the virus -- faced fresh criticism over his early response to the crisis and shortages of protective equipment.

The United States has the highest caseload of any country, with more than 759,000 confirmed infections and nearly 41,000 deaths.

But in New York state, Governor Cuomo said, "We are past the high point, and all indications at this point is that we are on the descent."

After days of bickering between Trump and several governors on the extent of federal help for the states, Cuomo adopted a tempered tone Sunday, saying the joint federal and state effort had been a "phenomenal accomplishment."

But he cautioned that without more federal help, cash-strapped states will suffer severely.

"You'll see a cut to hospitals in the midst of this," he said.

Americans and others around the world have been chafing under stay-at-home orders, and some have taken to the streets to protest.

New anti-lockdown demonstrations over the weekend drew hundreds of people in states including Colorado, Texas, Maryland, New Hampshire and Ohio. Many waved American flags, and some carried weapons. But others stayed in their cars or wore protective masks.

Although fog shrouded the area around the state's Jacksonville Beach, those who turned out were "keeping their distance" from each other, Captain Rich Banks of Neptune Beach Ocean Rescue said.

Trump fueled another bout of fury over the weekend by lending support to protests against the lockdown restrictions -- which medical experts say save countless lives.

In Brazil, President Jair Bolsonaro -- who has repeatedly claimed the virus threat is overblown -- joined hundreds of protesters in Brasilia who objected to state governors' stay-home orders.

Brazil has the most infections in Latin America, a region where an AFP tally on Sunday showed total cases had surpassed 100,000 with nearly 5,000 deaths.

For many of the world's 260 million Orthodox Christians marking Easter, the celebration took place at home, with services online or on television.

Australia has called for an independent investigation into the global response to the pandemic, including the World Health Organization's handling of the crisis and China's actions.

The pandemic has had devastating economic effects worldwide.

In poorer and more densely populated countries, many governments are struggling to enforce restrictions on movement that are piling misery on the needy.

In the United States, 22 million Americans have lost their jobs and food banks are struggling to meet a surging demand.

The virus has also thrown the spotlight on nursing homes as danger spots for infection.

A British charity warned the death tolls in such facilities in Britain could be five times higher than the official numbers.

The disease can take a toll on residents' mental health, as well.

"It's gloomy to not be able to see anyone. To be all alone. You fear the worst in moments like these," said Marc Parmentier, 90, who lives in a nursing home outside Brussels.