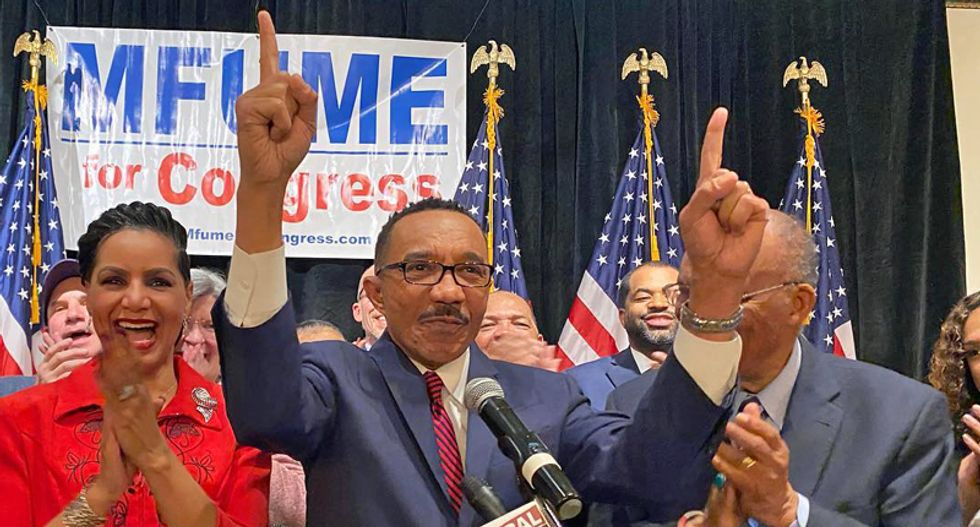 Multiple publications are projecting that Kweisi Mfume will be the newest member of Congress.

"Democrat Kweisi Mfume won the first election in Maryland since the coronavirus pandemic, prevailing in a mostly vote-by-mail contest to reclaim a Baltimore-area congressional seat he held for 10 years before his late friend Elijah Cummings," The Baltimore Sun reported Tuesday.

Mfume served as president and CEO of the National Association for the Advancement of Colored People (NAACP).

"By defeating Republican commentator and nonprofit founder Kimberly Klacik, Mfume, 71, will fill the remainder of Cummings’ term, ending Jan. 3," the newspaper reported. "He is also on a June primary ballot — along with Klacik and others — for candidates seeking a full, two-year term in the 7th Congressional District."

The Associated Press is also projecting Mfume the winner.

'An existential threat': Legal expert breaks down the Supreme Court case that could radically reshape US elections

On Wednesday, December 7, the U.S. Supreme Court is scheduled to hear oral arguments in Moore v. Harper, a case that deals with partisan gerrymandering and redistricting in North Carolina as well as a far-right legal idea known as the independent state legislature theory (often abbreviated as ISL). It is the ISL part that has civil libertarians especially worried; the ISL, in its most severe form, argues that only state legislatures should be allowed to govern the administration of elections in individual states — not governors, not judges, not state supreme courts.

The U.S. Supreme Court has rejected the ISL over the years. But civil libertarians and legal experts fear that if the radical-right 2022 edition of the High Court accepts the ISL as valid, it could have dire consequences for democracy in the United States. Imagine a scenario in which a Democratic presidential candidate wins Wisconsin, for example, in 2024 or 2028 but MAGA Republicans in the Wisconsin State Legislature want to give the state’s electoral votes to the Republican nominee who lost; such a scenario, according to civil libertarians and experts on constitutional law, is not far-fetched if the High Court accepts the ISL in its most radical form.

"Dimock residents have known for 14 years that Cabot Oil & Gas is guilty of contaminating our water."

Nearly 14 years after a well explosion on New Year's Day 2009 revealed to Dimock residents that methane had percolated into their groundwater, Cabot Oil & Gas pleaded no contest to 15 criminal charges, including nine felonies. The notorious driller, now owned by Coterra Energy, was featured in the 2010 HBO documentary Gasland.

Wohl and Burkman were behind the hoax robocalls seeking to intimidate Black voters out of casting mail-in ballots in the 2020 presidential election. The automated calls came during the height of the COVID pandemic, when mail-in voting was expanded throughout the country as a protective measure.

Both men were sentenced to two years of probation and ordered to wear GPS ankle monitors with home confinement for six months beginning at 8 pm every night. Cuyahoga County Common Pleas Court Judge John Sutula also placed a $2,500 fine on each of them, comparing their actions to the widespread Black voter suppression in the 1960s.