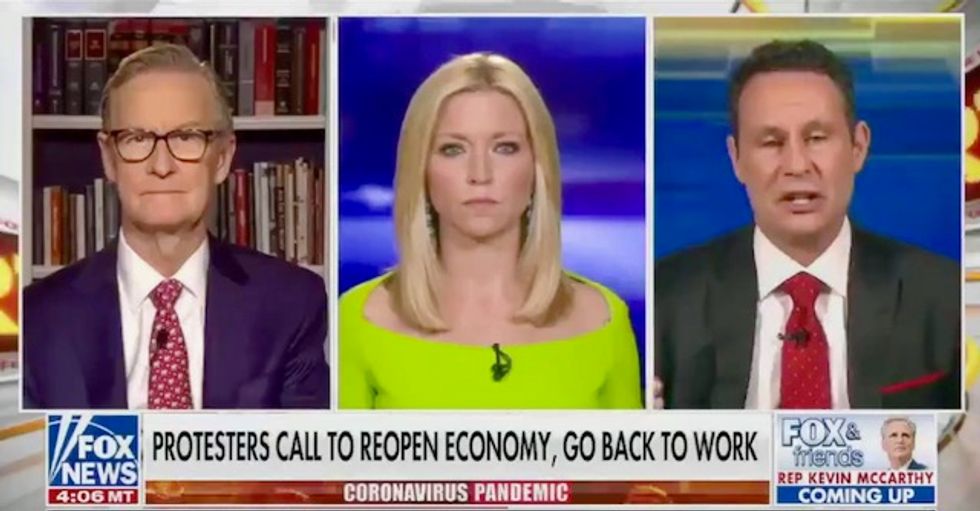 Fox News' "Fox & Friends" has been forcefully advocating President Donald Trump's agenda and Monday was no different. Co-host Brian Kilmeade decided to praise the dangerous "Stay-at-Home" protests, rattling off a list of six he said took place over the weekend. News reports show protestors were not observing critical social distancing guidelines and some even said they do not believe the deadly coronavirus is real.

But Kilmeade, who supports the protestors and believes the stay-at-home measures which have proven to save lives should be discarded, went even further, naming at least nine protests that are scheduled for today. The protests were started by "wealthy conservative groups," The Guardian reports, and "traditional rightwing groups" with at least one with ties to "the family of Trump’s education secretary, Betsy DeVos.."

"The American people have demonstrated this thing called 'responsibility,'" Kilmeade claimed, despite all evidence to the contrary. "We get it. We understand if we can stand ten feet away from you at Home Depot we can probably do it at the dry cleaner and the deli. So we could actually get this. So I think it's time for people to understand, we'll follow orders to a degree. We understand the danger. Everyone's got somebody they know who has died or they're suffering, so, we'll beat this."

"I think they've got to start treating the American people like adults," Kilmeade insisted.

Brian Kilmeade claims that many businesses can open back up despite coronavirus because "the American people have d… https://t.co/sPGdKjLr26
— Bobby Lewis (@Bobby Lewis)1587378294.0

Meanwhile, here's a protestor from this weekend falsely claiming coronavirus is a "lie," while wearing what apparently is supposed to look like a hazmat suit:

This is the “liberate” protest happening now in Austin, Texas. It looks like they packed themselves as close toget… https://t.co/ERkkyvl3g8
— Joshua Potash (@Joshua Potash)1587233737.0

And one in California: