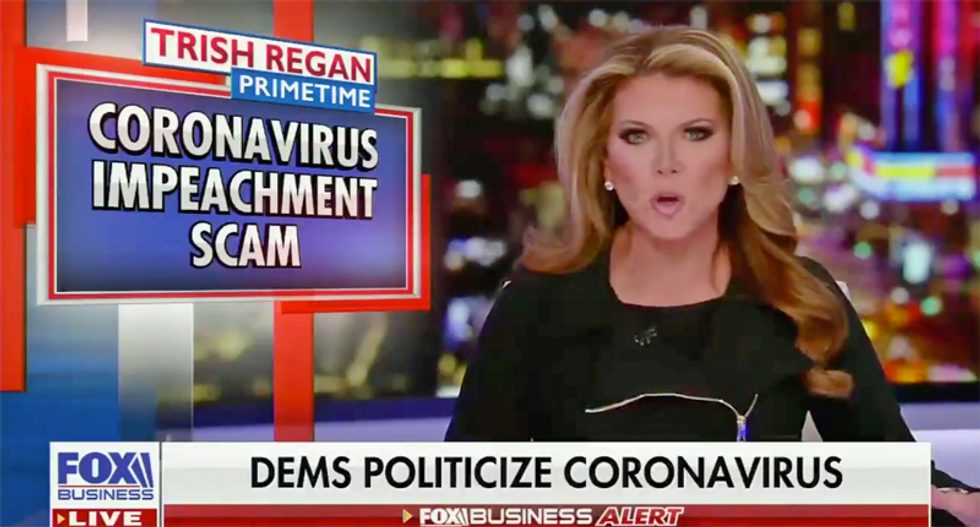 Fox News has moved to dismiss a lawsuit filed by a Washington state group accusing the network of "deceptive" coronavirus coverage by arguing that the First Amendment protects "false" and "outrageous" speech.

The network's lawyers said in a motion seeking to dismiss the lawsuit that the "First Amendment does not permit censoring this type of speech based on the theory that it is 'false' or 'outrageous.' Nor does the law of the State of Washington."

The Washington League for Increased Transparency and Ethics (WASHLITE) filed a lawsuit in King County earlier this month seeking a court order barring the network from "interfering with reasonable and necessary measures to contain the virus by publishing further false and deceptive content."

The suit accused the network of violating the state's Consumer Protection Act by "falsely and deceptively disseminating 'news' via cable news contracts that the coronavirus was a 'hoax' and that it was otherwise not a danger to public health and safety."

The suit specifically cited Fox News host Sean Hannity and former Fox Business host Trish Regan for having "acted in bad faith to willfully and maliciously disseminate false information denying and minimizing the danger posed by the spread of the novel coronavirus."

Hannity downplayed the threat of the coronavirus and argued it was less dangerous than the flu. Regan was fired shortly after accusing Democrats of pushing a "coronavirus impeachment scam."

Though there are numerous examples of Fox opinion hosts downplaying the threat posed by the virus, many legal experts have dismissed the idea that the network could be sued for its coverage of the pandemic. One of the lawyers involved in the lawsuit has since withdrawn from the case.

"It's Constitutional Law 101: the First Amendment protects our right to speak openly and freely on matters of public concern," Fox News Media general counsel Lily Fu Claffee said in a statement. "If WASHLITE doesn't like what we said, it can criticize us, but it can't silence us with a lawsuit."

The network's 76-page filing, which includes dozens of pages of show transcripts and examples of other media outlets purportedly downplaying the risk of the virus early this year, argues that the hosts "never described the Coronavirus as a 'hoax' or a 'conspiracy,' but instead used those terms to comment on efforts to exploit the pandemic for political points."

The network's lawyers argued that Hannity and Regan simply took part in an "intense public debate" over "how serious of a threat" the virus posed, noting that Hannity, in March, urged the elderly and people with compromised immune systems to take "extra, extra, extra caution."

The motion also noted that when Regan wrongly argued that the "flu … can be even more deadly" than the coronavirus, she emphasized that she was "not saying that people should not take [the coronavirus] seriously."

"Under the First Amendment and state law, the truth or falsity of this type of speech must be resolved through free and open debate in the marketplace of ideas — not through burdensome litigation seeking to impose legal penalties on political statements that a jury might deem 'false' or 'outrageous,'" the motion said. "In addition, the Complaint also fails because the statements are constitutionally protected opinions. Again, even accepting the Complaint's characterization of the speech at issue, the Fox commentators were expressing their view on the scientific question of how dangerous the Coronavirus is and how society should respond to it — including what type of governmental action should be taken."

The motion went on to cite CNN and New York Times coverage that compared the coronavirus to the flu, arguing that "If this type of allegedly 'false' speech can be censored, then free and open debate on matters of public concern is a dead letter."

The network added that WASHLITE's bid to get an injunction preventing Fox News from expressing similar opinions in the future is an example of unlawful "extraordinary prior restraint." The Washington CPA also "does not regulate political commentary … nor is such commentary the type of 'extreme and outrageous conduct' covered by the tort of 'outrage,'" the motion said.

Legal experts largely agreed with the network's position that the lawsuit was unlikely to succeed.

Catherine Clark, an attorney for WASHLITE, vowed to respond to the motion and told Variety that the suit "was not about prohibiting free speech, but making sure that news organizations convey accurate information."

Legal culpability aside, media analysts have widely criticized Fox News for putting their viewers at risk by downplaying the threat posed by the virus, which has now killed 26,000 people in the United States.

A letter signed by more than 70 journalism professors around the country criticized Fox News for spreading "misinformation" about the virus.

"Viewers of Fox News, including the president of the United States, have been regularly subjected to misinformation relayed by the network — false statements downplaying the prevalence of COVID-19 and its harms; misleading recommendations of activities that people should undertake to protect themselves and others, including casual recommendations of untested drugs; false assessments of the value of measures urged upon the public by their elected political leadership and public health authorities," the letter said, pointing to a recent poll that found that 79% of Fox News viewers believed the media had overstated the danger posed by the virus.

The network's competitors have seized on the criticism.

"There are surveys on this, showing a majority of people who get information from Fox still think the virus threat is overblown," MSNBC host Ari Melber said last week:

They're more likely to downplay it even compared to other Republicans. If you don't get your information from Fox News or online conspiracy theories, you're less likely to think it's overblown because it's not overblown. For Fox viewers, it's especially perilous. The median age there is 67. That mostly older audience, especially vulnerable if they contract this virus. And as we just showed you, they've been told to basically downplay it.