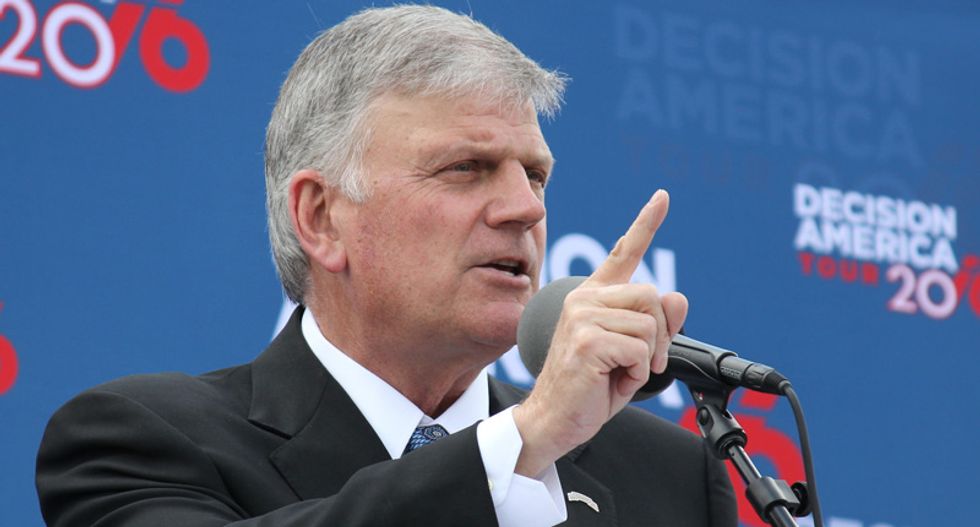 Rev. Franklin Graham speaks to attendees at a stop in Lincoln, Neb. during his Decision America tour in 2016. (Matt A.J./Flickr)

You may have noticed a contradiction among members of the president’s most loyal voting bloc, white evangelical Christians. On the one hand, their leaders are not taking the coronavirus pandemic seriously. Pastors continue to hold Sunday services, many in the thousands, thus exposing their congregations, which include the sick and elderly, to a contagion that has killed 13,000 people in this country, 2,000 yesterday alone.

On the other hand, their leaders are taking the disease outbreak very seriously, seeing it as an outcome of mankind’s sinful ways, and thus encouragement to seek salvation through Jesus Christ. Rev. Franklin Graham spelled this out Saturday on Fox News:

This is a result of a fallen world, a world that has turned its back on God. So I would encourage people to pray and let’s ask God for help. I don’t think that God planned for this … It’s because of the sin that’s in the world. Man has turned his back against God. We have sinned against Him. We need to ask for God’s forgiveness.

In plain English, here’s the contradiction: the viral rampage is serious enough to fall to your knees in penitence, but not serious enough to cease attending church, where you are most likely to contract it among throngs of worshipers. If you don’t go to church Sunday, does that mean you’ve sinned against God? If you get sick, does that mean you’ve sinned against God? Are you damned if you do and damned if you don’t?

The answer is yes.

Now the popular thing for me to do at this point in the argument is to say damn the religion. Being put between a rock and hard place is why all religions, and all genuine commitments to God, are the world’s bane. This is not only popular in certain liberal-progressive-leftist quarters; it’s expected. A person of faith can’t be totally with it.

There are counterarguments aplenty, but here’s mine. Being put between a rock and a hard place is not what an all-knowing and all-loving God would ever do. No God I am bound to respect using the gifts of reason and empathy endowed to me would force my fellow human beings to choose between offending God and death by disease. By extension, no God I am bound to respect would ever threaten people with an eternity of pain and suffering for one brief lifetime, however “sinful” it was. Rev. Graham says humanity turned against God. More likely, his spiteful God turned against humanity.

My counterargument is therefore better than the kind popularized by militant atheists like Richard Dawkins, Steven Pinker and Sam Harris. They say they are making anti-religious arguments, but in choosing to dismiss believers rather than holding them to their respective standards of morality, their arguments are in fact deeply anti-moral.

This is important to note for reasons that might not be obvious. By making anti-moral arguments against believers, militant atheists—and the liberal-progressive-leftist quarters that can’t quite take people of faith seriously—make room for Graham and other white evangelical leaders to appear deeply moral when they are in fact not.

More importantly, and this is my big point, you can’t claim to be a follower of Jesus. Despite everything you think you know about him, Jesus was first of all an empiricist. He could not have been anything less, because empiricism lies at the heart of the Golden Rule. To do unto others what I would have done unto me, which is the center of Christ’s teachings, I must work toward an honest grasp of reality, a fact-based sense of truth and falsehood, an acceptance of human limits without despair, and a trust in the shared state of our fleeting existence. We, all of us, are equal in the eyes of God.

This isn’t new. Indeed, this argument is ancient.