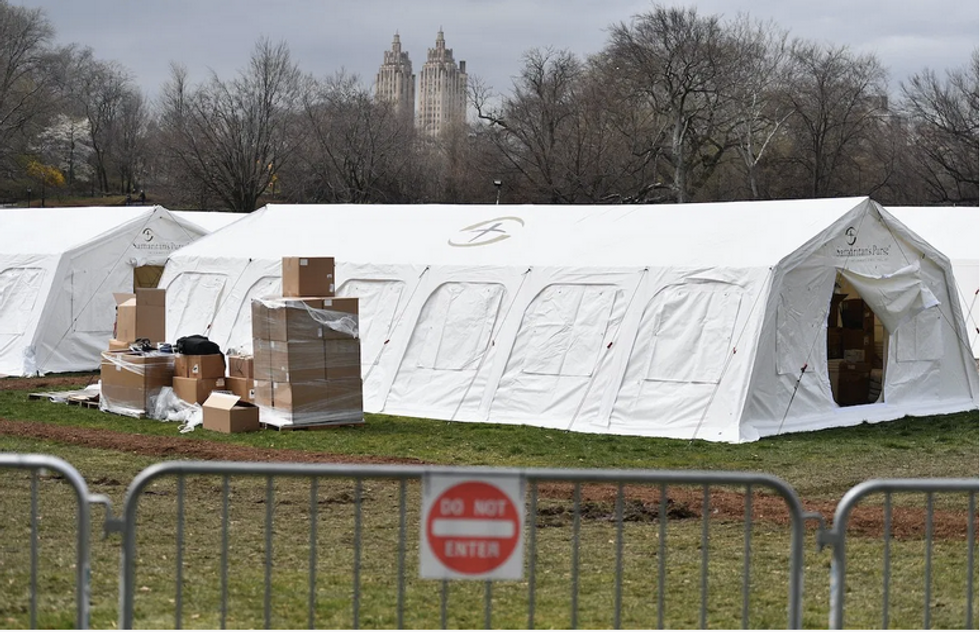 Franklin Graham's 68-bed COVID-19 field hospital is now mired in controversy as concerns grow about exactly how his Samaritan's Purse Christian fundamentalist ministry came to set up shop in Manhattan's historic Central Park, what their actual mission is, and if they will not discriminate. The 14-tent project was due to take in patients after a tour by New York City Mayor Bill de Blasio on Tuesday, but both events have been delayed. Local officials are expressing concerns about Graham's group's intentions, their ability and desire to treat all patients equally, and the quality of care New Yorkers are expected to receive.

Graham is a far right wing religious extremist who has spent decades attacking LGBTQ people and same-sex marriage. He is closely tied to President Donald Trump, who praised the tent city mission on Tuesday.

“Franklin Graham is an extraordinary person. And Samaritan’s Purse has been, like so many others, has been amazing. And so fast. They did it so fast. He’s been doing that for a long time but I think people are really seeing what they have done,” Trump said.

Samaritan's Purse uses only Christian staff, including doctors. Graham specifically called for only Christian medical professionals to work in his Central Park project. All are asked to sign his Statement of Faith that includes anti-LGBTQ and anti-abortion declarations.

The City of New York originally said Samaritan's Purse would operate the field hospital jointly with Mount Sinai Hospital. That is not the case. The prestigious medical center will be providing patients but no oversight.

De Blasio says the City will monitor the field hospital, but "told reporters on Tuesday that he was assured the group will act in a manner 'truly consistent with the values and the laws of New York City.' He said he spoke personally with Mount Sinai CEO Dr. Ken Davis, who told him Samaritan's Purse had signed a written pledge to treat all patients equally."

"We're going to send people over from the Mayor's Office to monitor," de Blasio said. "I am very concerned that this is done right. But if it is done right, we need all the help we can get."

Graham claims "Samaritan's Purse has been asked to help in New York as the state and their medical infrastructure has been overwhelmed by the coronavirus."

But U.S. Rep. Carolyn Maloney told NBC News, "We sent out a call for help, and they responded."

Samaritan's Purse “is a dangerous religious propaganda machine that uses international medical aid to further their agenda," Jacklyn Grace Lacey, a medical anthropologist who has closely tracked the Ebola response, told Gothamist. "The medical care they provide is dangerously sub-standard."

She added that the optics of the group setting up a facility in such an iconic location as Central Park were not a coincidence.

"The Graham family is well trained in how to create a spectacle," Lacey said. "I am tremendously concerned they will hurt far more of our fellow New Yorkers than they will help."

Samaritan's Purse's goal is quite clear. Its primary mission is not healthcare.

The group for decades has been accused of using disasters to convert victims to Christianity.