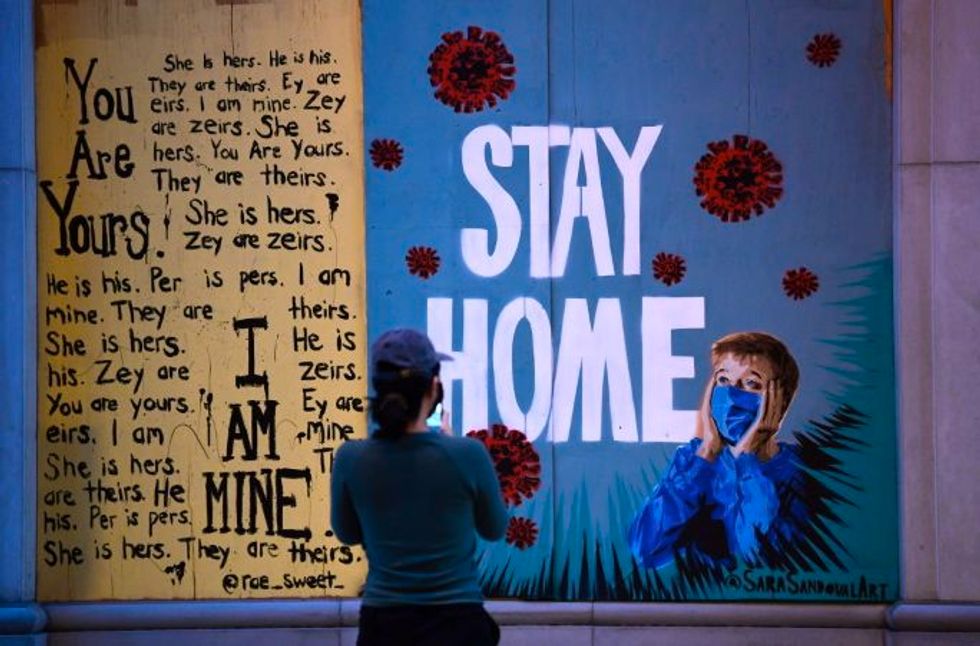 The brutal economic impact of the coronavirus deepened Wednesday with dire news from the United States and Germany, increasing pressure worldwide to ease lockdowns and reduce the cost of the pandemic.

Countries around the globe are balancing fears of the worst global recession for a century against the risk that lifting restrictions too fast will cause a second wave of the virus that has already killed 214,000 people.

But with the United Nations warning that half the global workforce risks having their livelihoods destroyed and the United States announcing a dramatic end to a decade of growth, the economic pain caused by the outbreak is mounting by the day.

AFP / Simon MALFATTOSpread of the coronavirus

The aviation industry also unveiled grim new tidings of the damage caused by worldwide travel bans aimed at halting the spread of a disease that has infected three million people worldwide.

Frightening new details were meanwhile emerging of what has until now been seen as mainly a respiratory illness, with a coronavirus-related syndrome affecting the heart seen in children in Britain and France.

- 'Squall before the hurricane' -

The United States, the world's biggest economy, announced that economic output collapsed 4.8 percent in the first quarter of the year as COVID-19 hit, the steepest decline since the Great Recession of 2008.

"These data capture only the squall before the second quarter hurricane," Ian Shepherdson of Pantheon Macroeonomics said, warning that far worse could be ahead.

The country has also reported its millionth coronavirus case, and at over 58,000 the country's COVID-19 death toll is by far the world's highest -- surpassing the number of Americans killed in the Vietnam War.

US President Donald Trump, seeking re-election in November, has been pushing for states to ease their anti-virus measures.

AFP / Robyn Beck A nurse awaits his next patient at a mobile COVID-19 testing station in a public school parking area in Compton, California

Europe's powerhouse Germany meanwhile "will experience the worst recession in the history of the federal republic" founded in 1949, Economy Minister Peter Altmaier warned.

Germany is one of many across Europe easing its restrictions. From Wednesday, the capital Berlin joined the rest of country in requiring masks to enter shops. Nose and mouth coverings are already compulsory on buses, trains and trams.

"I think it's great, it's the right thing," said Heike Menzel, 54, who was stacking shelves in Bio Company supermarket, wearing a simple black fabric mask: "You're protecting others."

Italy, Spain and France have been the worst affected European countries, with each reporting more than 23,000 deaths but daily tolls appear to be on a downward trend and they are all charting their way out of shutdown.

Spaniards have increasingly embraced home workouts as they wait for a return to something approaching normality.

"It's very motivating because we can see each other, talk," said Ivan Lopez, 45, a Madrid teacher who has been using the Zoom video app for workout sessions with his running group.

But just weeks after being hospitalised with the virus, Prime Minister Boris Johnson was celebrating on Wednesday after becoming a father again when his partner Carrie Symonds gave birth to a boy.

AFP / SAJJAD HUSSAIN A man dressed as 'Yamraj', the Hindu mythical angel of death, campaigns to raise awareness on the importance to stay home and maintain social distancing during an event organised by Delhi police

The pressure to ease lockdowns is immense as the world economy teeters, with demand for goods gutted, travel and tourism hammered and big banks reporting deep falls in quarterly profits.

The International Labour Organization said Wednesday that around 1.6 billion people -- half the global workforce and a three quarters of workers in the informal economy -- are "immediate danger of having their livelihoods destroyed".

"We all have to think of the human suffering, the human need that stands behind that extraordinary figure," said Guy Ryder, director-general of the UN agency.

The crisis is affecting all parts of the economy, but one of the worst-hit areas is the aviation industry, affected by travel bans and border closures around the globe.

World air traffic suffered a massive drop of more than half in March compared with the same period last year, the "largest decline in recent history", the International Air Transport Association (IATA) said.

The impact is also still being felt by cultural and sporting events.

Japanese Prime Minister Shinzo Abe said on Wednesday it would be "difficult" to hold the postponed Tokyo Olympics if the pandemic is not contained, while the International Olympic Committee said the delay would cost it several hundred million dollars.

The outbreak however appears to be under control in China, the world's second biggest economy, where the virus first emerged late last year.

China's top legislature will hold its annual meeting next month, after having postponed it from March for the first time due to the disease.

The country has also reported no new deaths reported for two weeks straight and confirmed fatalities at around 4,600 -- although doubt has been cast on the accuracy of these figures.

Scientists are scrambling to develop treatments and a vaccine, with myriad studies under way.

But Britain and France have both warned of a possible coronavirus-related syndrome emerging in children -- including abdominal pain and inflammation around the heart.

"I am taking this very seriously. We have absolutely no medical explanation at this stage," French Health Minister Olivier Veran said.