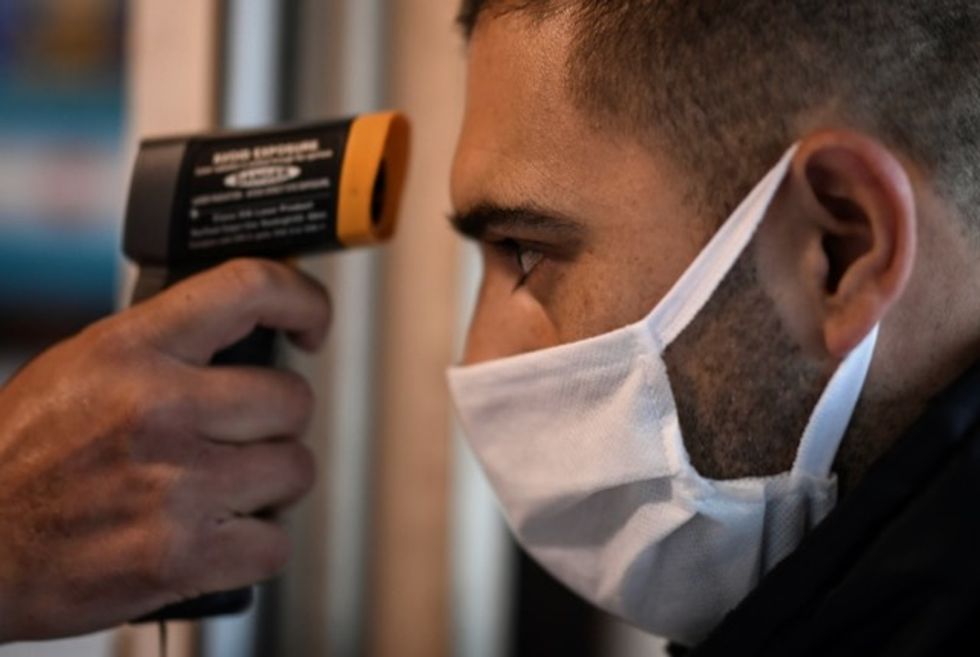 World coronavirus deaths surged past 150,000 Friday as US President Donald Trump accused China of continuing to cover up its toll, even after Beijing revised figures sharply upward for Wuhan, the original epicenter of the global pandemic.

COVID-19 fatalities mounted in the United States and hard-hit Western Europe countries, but fresh data on rising infections and deaths in Africa showed the virus is leaving no continent uscathed in its global march.

More than half of humanity -- 4.5 billion people -- were confined to their homes, with evidence mounting of social distancing's success in slowing the pandemic.

But widespread nervousness remained over when and how to ease confinement measures to revive the world economy, battered by what the International Monetary Fund has dubbed the "Great Lockdown."

More than 2.2 million cases of COVID-19 have been reported in 193 countries and territories, according to figures collected by AFP from national authorities and information from the World Health Organization (WHO).

The figures probably reflect only a fraction of the actual number of infections however, because many countries are testing only the most serious cases.

For example, a new Stanford University study testing Silicon Valley residents for viral antibodies suggested that the true number of COVID-19 infections was at least 50 times higher than the official figure.

Illustrating the increasing threat in countries less in focus, Africa reported its 1,000th death on Friday.

Trump, who has been accused of reacting too slowly to the coronavirus threat, alleged that Beijing's numbers were still not accurate.

Trump did not offer evidence, but pressure has mounted in recent days on Beijing to come clean over its handling of the original outbreak.

US media has reported suspicions that the virus came not from a Wuhan wet market as first claimed, but from a poorly managed nearby research facility studying bat-related diseases including coronaviruses.

Leaders in France and Britain have also questioned China's management of the crisis, and French President Emmanuel Macron said it would be "naive" to think Beijing had handled the pandemic well.

Beijing hit back earlier Friday, insisting there had been no cover-up.

AFP / COVID-19 and the immune system

Governments around the world are grappling with the question of when to reopen society, seeking a life-and-death balance between unfreezing stalled economies and preventing a second deadly coronavirus wave.

Germany became the latest country to unveil plans to lift some restrictions, taking on the delicate task of reopening without triggering a new wave of infections.

The government declared its outbreak "under control" and said select small shops will be allowed to reopen Monday and some children would return to school within weeks.

Switzerland, Denmark and Finland were also gradually re-opening shops and schools, and even in hard-hit Italy, people began emerging from lockdown, with Venice residents strolling around quiet canals stripped of their usual throngs of tourists.

But Japan, Britain and Mexico all expanded current restrictions.

And in Russia, recorded infections topped 32,000 as President Vladimir Putin warned that "the risks surrounding the epidemic's spread are still very high, not just in Moscow but in many other Russian regions".

In the United States, a more complex picture was emerging.

Trump, whose reelection in November could hinge on how fast US life returns to normal, appeared to endorse protests against stay-at-home orders in several states -- although he has officially left it to governors to decide when to lift lockdowns.

In Florida the governor, a close Trump ally, gave a green light to reopening some beaches and parks.

But in New York state, with its namesake city the hardest hit in the world by the coronavirus, Governor Andrew Cuomo extended a shutdown order until May 15, as he accused Trump of not helping in efforts to expand testing.

Signs of the economic damage of the pandemic also mounted.

China reported Friday its GDP shrank 6.8 percent in the first quarter, the first contraction since quarterly growth data started in the early 1990s.

Lockdown measures were starting to pinch some of the world's most vulnerable economies.

Tobacco farmers in Zimbabwe fear a delayed start to the normally busy auction season, the lifeblood for thousands of growers in impoverished rural regions, due to lockdown measures.

"This year our harvest hasn't been good at all," farmer Shaw Mutalepo told AFP, as workers in face masks crunched cured leaves into large bales.

In Washington, the Trump administration announced another $19 billion in relief for farmers, who have been hit by a massive shift in food consumption with schools and restaurants shuttered across the country.

"Having to dump milk and plow under vegetables ready to market is not only financially distressing, but it's heartbreaking as well to those who produce them," Secretary of Agriculture Sonny Perdue said.

Some $3 billion will be used to buy up surplus dairy products and produce that farmers have been destroying, unable to get it to consumers or food processors.

Meanwhile the IMF and World Bank said that Africa needs another $44 billion to fight the pandemic, even after a freeze in debt payments for many countries and massive support pledges.

The IMF also warned the virus could spark another "lost decade" in Latin America, with debt moratoriums said not to be enough support.