GOP congressman who demanded all members come to DC to vote on stimulus skipped the previous bill to go to a fundraiser: report 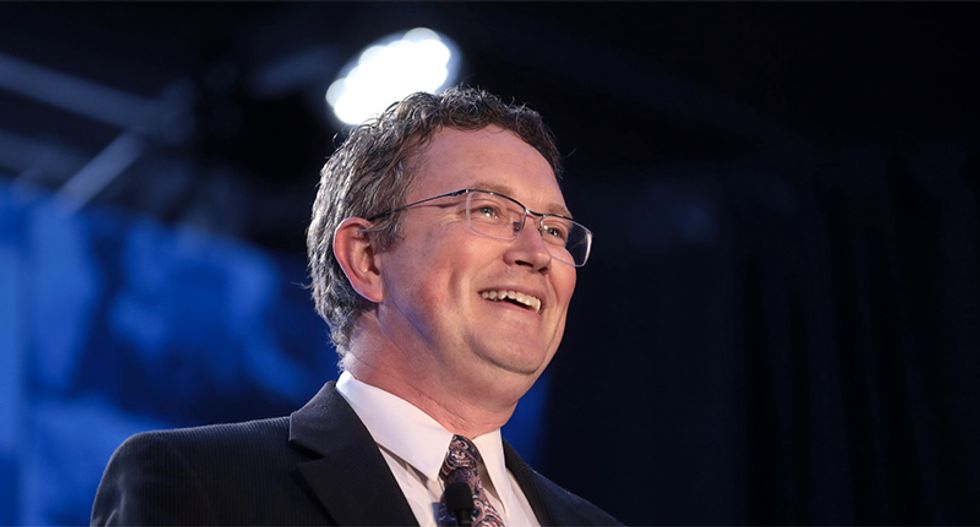 One of the most universally hated politicians in March became Rep. Thomas Massie (R-KY), who obstructed a voice vote on the coronavirus stimulus package and demanded every member drag themselves back to Washington, D.C. to record their vote. Just about everyone in both parties raged about it, from former Secretary of State John Kerry saying that Massie "tested positive for being an asshole," to President Donald Trump blasting Massie as a "third rate Grandstander."

Massie, a libertarian budget hawk, insisted that he acted for "principled reasons." But that stands in stark contrast with his own behavior.

According to The Daily Beast, even though Massie wanted to drag everyone back to Washington to vote on this bill, he couldn't even be bothered to show up himself for the previous round of stimulus.

"Two weeks earlier, when Congress voted on a $850 billion coronavirus response bill, Massie didn’t bother to go to Washington D.C at all," wrote Sam Brodey. "In fact, he scoffed at the idea that he’d even show up to put himself on the record. While his colleagues filed into the House chamber around midnight on March 14 to vote on that legislation — known as Phase 2 of the coronavirus response — Massie was back home in Kentucky, having just headlined a fundraiser for his reelection campaign and gearing up to reorganize his home pantry."

He even tweeted about it in real time:

Would you eat these? Rhonda and I made these pickles 12 years ago and just found them while organizing the pantr… https://t.co/C5AGKMO7Ae
— Thomas Massie (@Thomas Massie) 1584195929.0

Massie also joked about the virus and the stimulus effort on The Tom Roten Show after CPAC, referring to COVID-19 as the "Kung Flu" and saying the outbreak at CPAC was probably something else: "Half of my colleagues, who knows what they have based on their lifestyles?"