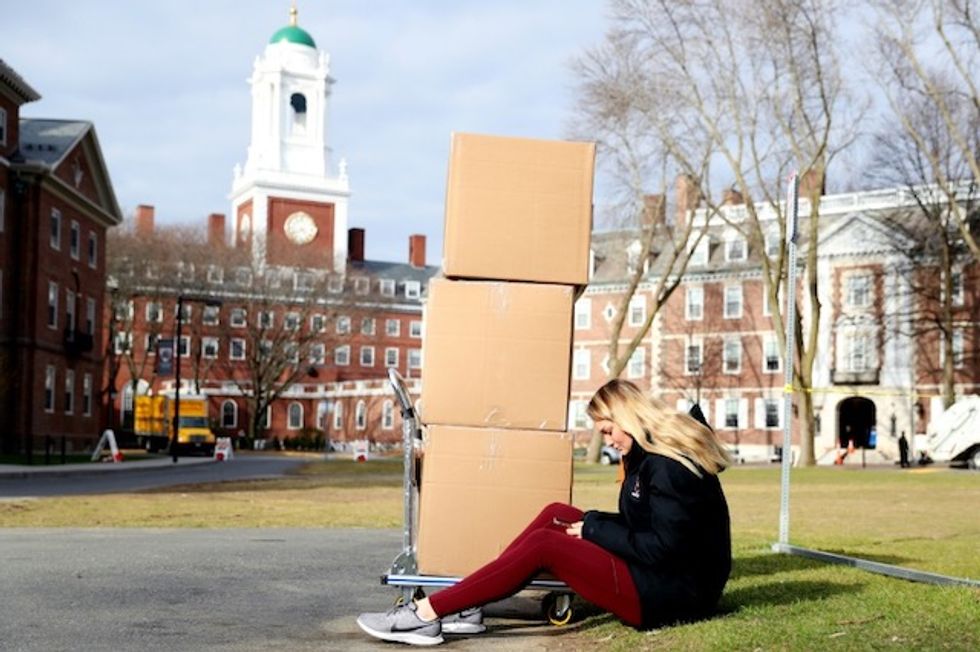 A Harvard student sits with her belongings before returning home (AFP:File : Maddie Meyer)

Harvard University said Wednesday it would not take millions of dollars it received from a coronavirus relief fund, following a backlash led by President Donald Trump.

Harvard, the globe's wealthiest university, was allocated $8.6 million under the federal CARES Act, a government stimulus package meant to cushion the US economy from the COVID-19 fallout.

On Tuesday, Trump called on the Massachusetts-based university to pay the money back, saying it was intended "for workers" and not for "one of the richest institutions" in the world.

Harvard later said 100 percent of the funds would be given to students "facing urgent financial needs due to the COVID-19 pandemic."

But on Wednesday, it announced that it would not take the money after all.

"Harvard has decided not to seek or accept the funds allocated to it by statute," it said in a statement.

"We will inform the Department of Education of our decision and encourage the department to act swiftly to reallocate resources previously allocated to Harvard."

Harvard added that it "remains fully committed to providing the financial support that it has promised to its students."

The university had been under fire over the funds, even before Trump's comments.

"The last time Harvard got this much money out of the blue, they had to accept Jared Kushner," joked Comedy Central's The Daily Show on Twitter, referring to Trump's son-in-law, on Monday.

The Department of Education was to receive $30.8 billion to support schools and universities, which are closed across the country, under the $2.2 trillion stimulus package passed last month.

The Harvard Crimson reported Tuesday that the university's endowment, the largest of any in the world, was last valued in 2019 at $40.9 billion -- though it cited administrators as saying that may have declined to the "mid 30-billion range" as a result of the pandemic.