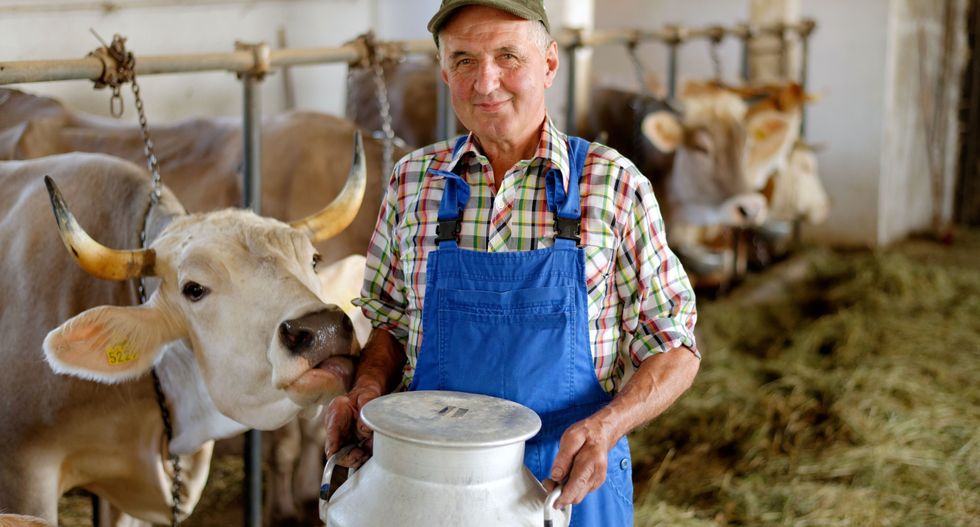 Farmer with Milk Can (Shutterstock).

On America's dairy farms, milk and other food products are going to waste in massive quantities. Farmers are dumping food — even as millions of American households are food-insecure, and record numbers of cars are swarming food banks nationwide.

Why is this? On Thursday, WIRED broke down the key reasons why farmers can't afford to feed the poor in general, and in the coronavirus pandemic specifically.

"Some products don’t sell well outside of a restaurant," wrote Aarian Marshall. "Tomatoes make their way into ketchup, soup, and pizza sauce eaten outside the home. Chicken wing prices have dipped, as the marquee product of March Madness missed its star turn. Meanwhile, prices of beef round and chuck, the more affordable parts used in ground beef and roasts, have jumped almost 40 percent since March. Prices for loin and 'short plate,' often used in short ribs, skirt steak, and hanger steak, have declined. 'It’s an indication of what things mostly go to food service, but also what people want and what people can afford,' says Jayson Lusk, an economist who heads Purdue University’s Department of Agricultural Economics."

"Longstanding relationships — and in some cases, contracts — with distribution partners are a hallmark of the agriculture industry," said the report. "Breaking from those well-established channels is a challenge for many growers. Dog Star Hops, which grows hops on 2 acres in Charlotte, Michigan, is going into its fourth growing season. Nearly all of the company’s hops are typically sold to local brewers associated with Michigan pubs and taprooms, the fruit of years building relationships."

The problem is, with so many restaurants shut down, these farmers have no distribution network to sell their food — even though many others would want it.

"Federal and state regulators are relaxing some rules in ways that might ease the pain," said the report. "The US Department of Agriculture temporarily suspended “country of origin” labeling rules that require most products sold in groceries to have labels noting where they’re from and how they were made. The department also said this week that it would buy $3 billion of meat, dairy, and other products directly from farmers and distribute them to food banks and nonprofits."

However, the report noted, "Such moves help only on the margin. Many food producers and distributors are struggling to plan for an uncertain future."