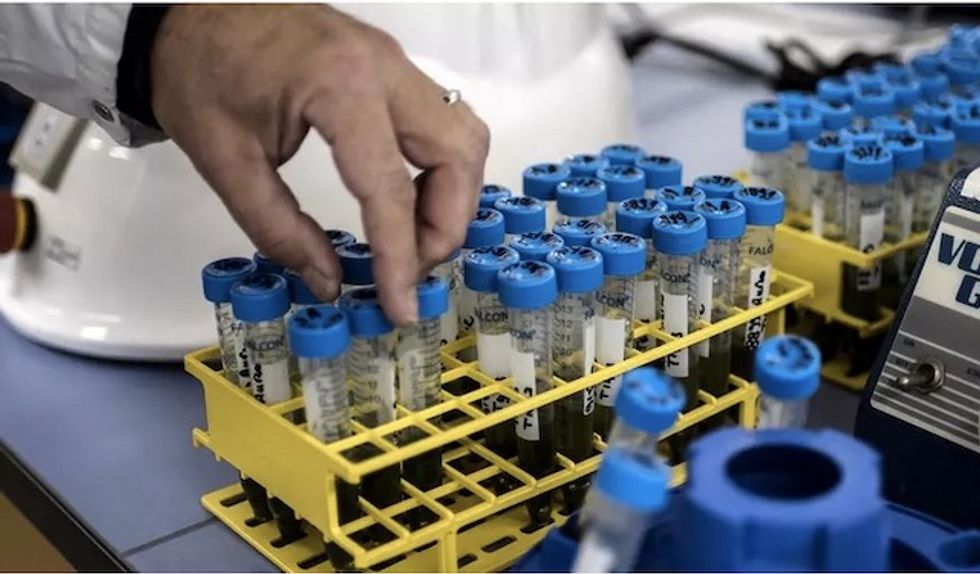 As COVID-19 tests become more widely available across the US, scientists have warned about a growing concern: the tests are not 100 percent reliable, meaning people with negative results might actually have the virus.

That could have devastating implications as a global recession looms and governments wrangle with the question of when to reopen economies shuttered as billions of people were ordered to stay home in an effort to break transmission of the deadly disease.

The majority of tests around the world use a technology called PCR, which detects pieces of the coronavirus in mucus samples.

But "there are a lot of things that impact whether or not the test actually picks up the virus," Priya Sampathkumar, an infectious diseases specialist at Mayo Clinic in Minnesota, told AFP.

"It depends on how much virus the person is shedding (through sneezing, coughing and other bodily functions), how the test was collected and whether it was done appropriately by someone used to collecting these swabs, and then how long it sat in transport," she said.

The virus has only been spreading among humans for four months and therefore studies about test reliability are still considered preliminary.

Early reports from China suggest its sensitivity, meaning how well it is able to return positive results when the virus is present, is somewhere around 60 to 70 percent.

Different companies around the world are now producing slightly different tests, so it's hard to have a precise overall figure.

But even if it were possible to increase the sensitivity to 90 percent, the magnitude of risk remains substantial as the number of people tested grows, Sampathkumar argued in a paper published in Mayo Clinic Proceedings.

"In California, estimates say the rate of COVID-19 infection may exceed 50 percent by mid-May 2020," she said.

With 40 million people, "even if only one percent of the population was tested, 20,000 false-negative results would be expected."

This makes it critical for clinicians to base their diagnosis on more than just the test: they must also examine a patient's symptoms, their potential exposure history, imaging and other lab work.

Part of the problem lies in locating the virus as its area of highest concentration shifts within the body.

The main nasal swab tests examine the nasopharynx, where the back of the nose meets the top of the throat. This requires a trained hand to perform and some portion of the false negatives arises from improper procedure.

But even if done correctly, the swab may produce a negative. That's because as the disease progresses, the virus passes from the upper to the lower respiratory system.

In these cases, the patient may be asked to try to cough up sputum -- mucus from the lower lungs -- or doctors may need to take a sample more invasively, when a patient is under sedation.

Daniel Brenner, an emergency physician at Johns Hopkins Hospital in Baltimore, described to AFP taking a test after performing a procedure called a bronchoalveolar lavage.

This was done on a patient whose nasal swab returned negative three times, but who showed all the signs of COVID-19.

Eventually, the patient's medical team placed a camera down his windpipe to examine the lungs, then sprayed fluid in and sucked out the secretions, which were then tested, resulting in a positive.

Uncertainty in clinical diagnoses is not new, and clinicians are well aware that no type of test for any condition can be considered perfect.

What makes COVID-19 different is its newness, said Sampathkumar.

"Most of the time when you have tests, you have test characteristics outlined carefully and warnings about tests interpretation," she said.

"We had no test for so long, and when we got the test, we started using it widely and sort of forgot the basics."

But "the real fear of that is people who are given a false negative test and then decide that they're safe to go around their daily life and go out and expose people," said Brenner.

Much hope is placed on newly available serological tests which look for antibodies produced by a person's body in response to the virus and can tell whether a person was infected, long after they recovered.

They could also be used to help diagnose a person who is currently infected but whose PCR test results showed a false negative, by waiting a week or so for the body to produce its immune response.

"We are excited about the serologic test, but we don't know how well it will work and we are starting to study it," said Sampathkumar.

Alex Jones appeared in the Austin, Texas courtroom Tuesday after the jury heard testimony from the parents of the Sandy Hook children who were killed in 2012. Jones didn't appear in court until after the families spoke. The trial is to decide the amount that Jones must pay to the families after questioning the legitimacy of the mass shooting. The families then spent the years after being attacked by conspiracy theorists motivated by Jones.

The InfoWars founder (now officially called InfoW, LLC), testified in court Tuesday afternoon after taking an oath to swear to tell the truth. It didn't go well. Ultimately, Judge Maya Guerra Gamble told the court staff that she was sending the jurors home after prosecutors took issue with Jones lying on the stand.

'Cover-up as well as a crime': Legal experts respond to bombshell top Trump officials' phones were wiped after J56

Legal experts are quickly weighing in on the bombshell news that the cell phones of top Trump administration officials at the Pentagon were wiped after the January 6 insurrection.

“The Defense Department wiped the phones of top departing DOD and Army officials at the end of the Trump administration, deleting any texts from key witnesses to events surrounding the January 6, 2021, attack on the US Capitol, according to court filings,” states CNN, which was first to report the latest development in destruction of possible January 6 insurrection evidence.

On Tuesday, David Eggert of Crain's Business News reported that the Republican Party of Michigan was forced to cancel an Election Night party following violent threats against their office.

"The Michigan GOP has abruptly canceled its primary election night watch party at a restaurant/pub in downtown Lansing due to a security concern," Eggert wrote on Twitter. "Deputy chief of staff Gustavo Portela says the party has received multiple threats about attacks to its building/staff."