In East Texas, thousands of Easter lilies with no place to go 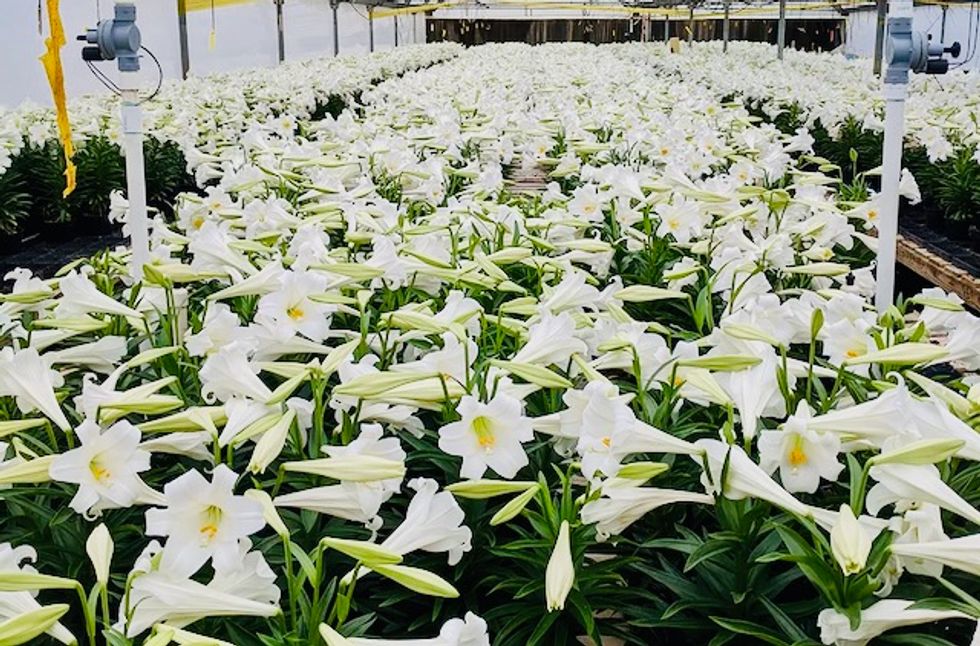 Don Darby's crop bloomed perfectly this year. But with many churches closed to slow the spread of the new coronavirus, most will never leave his greenhouses.

After the bulbs arrived in East Texas, Darby planted this crop, his 42nd, in mid-October, as he always does. The 34,000 bulbs in 34,000 little pots spent their first six weeks stacked on shelves in refrigerators, 40 days at 40 degrees.

Now the flowers are many times the height of their pots, their necks heavy with blossoms, elegantly curved like swans. They sit clustered in humid, sprawling industrial greenhouses, tens of thousands of blooms with nowhere to go, marking the end of Lent under a clear domed sky.

Darby, now 68, was 10 when his dad built his first greenhouse. Darby planted his first Easter lily crop in 1977, after he graduated from Texas A&M and joined the family business. He specializes in holiday plants; at a different time of year, he’d be anxiously minding his poinsettias.

This year’s Easter lilies are a good crop. Darby makes his living growing things, so he takes note of the weather. It was warm in December, and when the plants emerged from the refrigerators shortly before Christmas, the lilies started to really jump; they just came roaring out of their pots. He plied each with chemicals to keep the flowers from rising prematurely. Normally he wouldn’t use growth regulators so early, but after four decades, Darby sees a sprout and knows what to do.

Darby carefully considers his lilies and how they grow. He puts them in his best greenhouses with the tightest temperature controls, keeps them in the 70s during the day and the 60s at night. He maintains an internal shade system that can block out the sun. By Ash Wednesday, Darby should see a bud. He has a specialized tape measure that tells him, based on bud length, what temperature will get the lilies ready in time for Easter.

A greenhouse is not a cornfield. Darby is used to having control over his conditions.

Darby has readied his lilies for Easters as early as March 23 and as late as April 23. In years when Easter comes early and the plants prove slow, he knows he might have to warm the lilies a little more. If Easter falls late, he knows to consider lowering the temperature at night.

But even Darby doesn’t know what to do when there is no Easter at all.

Church doors across the state are closed this week as the godly prepare to celebrate what many consider the most important day of the Christian calendar at home via livestream. Texas churches are permitted to remain open if congregants take precautions to avoid spreading the deadly new coronavirus, but few are taking the risk.

By Easter this Sunday, Darby’s lilies would have been just where he wanted them, their carefully timed blooms gracing sanctuaries and altars across Texas, and perched on porches overseeing spirited egg hunts. But he’s stopped tending many of them.

A couple of weeks ago, when the lilies reached the right height, he would usually have consigned them to the cooler so they’d emerge, perfect and graceful, at just the right time. But that’s when he started hearing that churches would close as the state shelters in place. Darby sells his lilies wholesale, and he figures as much as 90% of this year’s crop would have been headed to churches. The cancellations grew in number.

“I knew that I wasn’t gonna sell them all,” he said. “There wasn’t a point in wasting resources to try to save a crop that wasn’t gonna be sold.”

He left thousands out of the cooler, letting the heat wilt them. Many he’s not even watering.

A bulb costs $1 or $1.50, and a soiling pot might cost a quarter. When Darby gets his lilies how he likes them, six or seven blooms per pot, he sells them wholesale for about $6 each.

Factoring in labor, greenhouse time, chemicals, he figures he’d have to sell at least half the crop to break even. This year, he may sell more than a third, some at a discount.

This spring, after their three-year journey across hundreds of miles of U.S. terrain and up through inches of fertilized soil, most of Darby’s Easter lilies will pass without observing the resurrection. Darby is letting thousands die.

“They’re sitting now — we’ll throw them away, put ’em in a pasture,” he said. “They’ll be good for the grass.”

Disclosure: Texas A&M University has been a financial supporter of The Texas Tribune, a nonprofit, nonpartisan news organization that is funded in part by donations from members, foundations and corporate sponsors. Financial supporters play no role in the Tribune's journalism. Find a complete list of them here.