In 'terrifying' indictment of for-profit system, 12.7 million Americans have lost insurance due to coronavirus 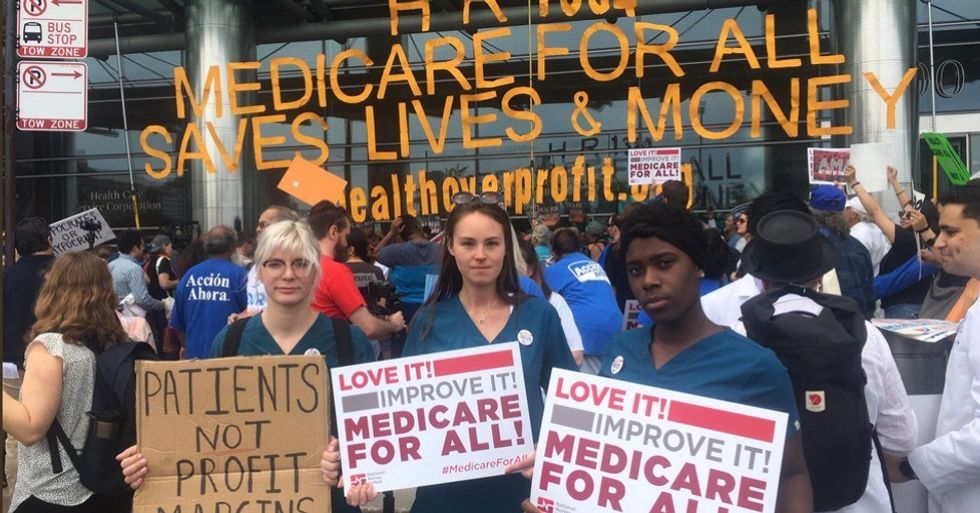 "If we take anything away from this pandemic, it's that health care should not be tied to employment."

New research from the Economic Policy Institute reveals that the number of Americans who are losing their employer-based health insurance is growing rapidly, with more than 30 million people laid off or furloughed in the last six weeks due to the coronavirus pandemic.

"The linkage between specific jobs and the availability of health insurance is a prime source of inefficiency and inequity in the U.S. health system," wrote EPI research director Josh Bivens and economist Ben Zipperer. "It is especially terrifying for workers to lose their health insurance as a result of, and during, an ongoing pandemic."

EPI released its new research shortly after government watchdog Public Citizen tweeted sarcastically that the U.S. has a "normal and fine healthcare system," sharing a news story about health insurer Cigna's skyrocketing profits for the first months of 2020 alongside EPI's earlier headline from just two weeks ago when the think tank estimated 9.2 million Americans had lost their employer-based health insurance.

Thursday's report also shines a light on the wide range of industries in the U.S. in which lay offs and furloughs have resulted in the loss of insurance.

In the hospitality and food services industry, which has lost more than 41% of its workforce so far due to the pandemic, more than 23% of workers have employer-based health coverage.

More than 56% of people who work in healthcare and social work have employer-sponsored insurance; that industry lost more than three million workers in recent weeks.

In the manufacturing sector, meanwhile, about 69% of workers have health insurance through their employers; manufacturing has also lost about three million workers.

To help the millions of people across all industries who are now without health coverage, EPI said, Congress must expand the free-at-the-point-of-service healthcare which already exists through Medicare and Medicaid.

"Because the United States is unique among rich countries in tying health insurance benefits to employment, many of the newly unemployed will suddenly face prohibitively costly insurance options," wrote Bivens and Zipperer. "A comprehensive policy solution would be to extend Medicare and Medicaid to all those suffering job losses during the pandemic period, with the federal government funding this expansion."

Bivens and Zipperer rejected a Democratic proposal, introduced earlier this month by Rep. Bobby Scott (D-Va.), to offer expanded COBRA subsidies to people. The COBRA program allows laid-off employees to pay out of pocket to stay on their former employers' health plans.

"While this policy proposal will help many workers continue coverage, in some states it will not help workers from small businesses with fewer than 20 employees, who are not eligible for COBRA," the authors wrote.

In an op-ed for Politico Tuesday, Sen. Bernie Sanders (I-Vt.) expanded on how Democrats must propose far bolder action than offering COBRA subsidies to unemployed Americans.

"There's another, better way to guarantee that everyone in America gets all the health care they need, without cost, for the duration of the pandemic: Empower Medicare to pay all of the health care costs for the uninsured, as well as all out-of-pocket expenses for those with existing public or private insurance, for as long as this pandemic continues," wrote Sanders.

"Expanding COBRA during the pandemic would do nothing to cover those who already lacked insurance," he added. "It also won't help the many Americans who continue to receive employer-provided health care but are still prevented from going to the doctor by massive deductibles and co-pays. In fact, the average family with employer-provided insurance faces $4,700 in out-of-pocket costs every year. The deductible alone for the average low-income worker is $2,600 a year. Maintaining the status quo does nothing to address these extraordinary costs, made worse during the pandemic economy."

Former Labor Secretary Robert Reich this week echoed the call to expand Medicare to all Americans, and said the pandemic makes the most compelling case yet for doing so.

"If we take anything away from this pandemic, it's that healthcare should not be tied to employment," said Reich. "Anything short of Medicare for All is unacceptable."