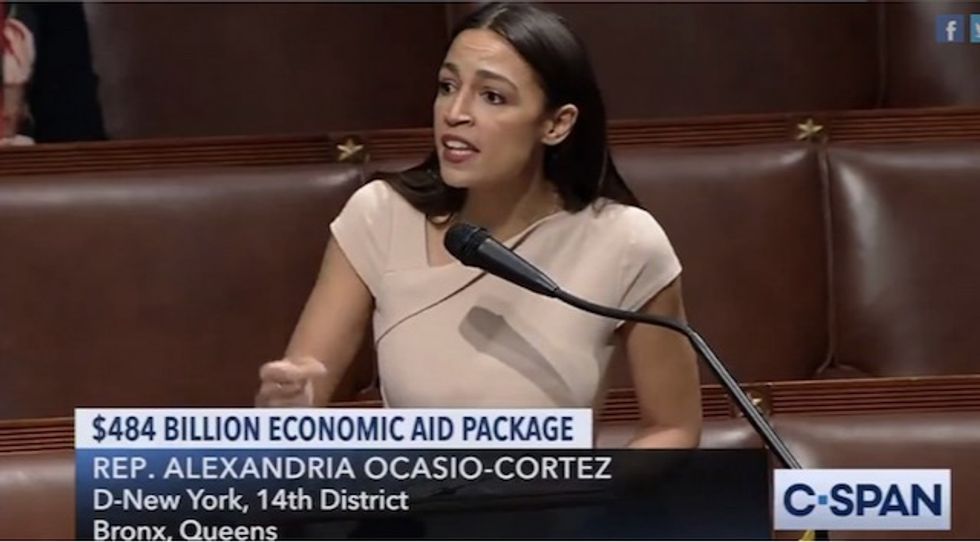 "If you had urgency, you would legislate like rent was due on May 1st and make sure that we include rent and mortgage relief for our constituents," said New York Democrat ahead of vote.

Congresswoman Alexandria Ocasio-Cortez only had 30 seconds on Thursday afternoon to share her frustration with her opponents on the Republican side of the aisle as the U.S. House of Representatives debated the next phase of federal legislation aimed at providing economic relief for the crisis spurred by the coronavirus outbreak.

While the package passed Tuesday by the Senate is expected to also receive approval in the House later in the day, the Democrat from New York is among those progressives who have expressed deep criticism of the bill. In her brief remarks Thursday, Ocasio-Cortez said it was laughable for GOP lawmakers to claim they are doing anything other than serving the wealthy and corporate interests of large companies as they continue to fight against meaningful economic proposals that would center the needs of working-class families, low-income people, small business owners, and others suffering most from the pandemic.

"It is a joke when Republicans say that they have urgency around this bill," she said. "The only folks that they urgency around are Ruth's Chris Steakhouse and Shake Shack—those are the people getting assistance in this bill. You are not trying fix this bill for mom and pops."

While referencing large restaurant chains that will benefit disproportionately from the new relief package that includes over $300 billion in additional funding for a flawed small business loan program, Ocasio-Cortez said the legislation does little to help those struggling to make ends meet.

"If you had urgency, you would legislate like rent was due on May 1st and make sure that we include rent and mortgage relief for our constituents,"she said.