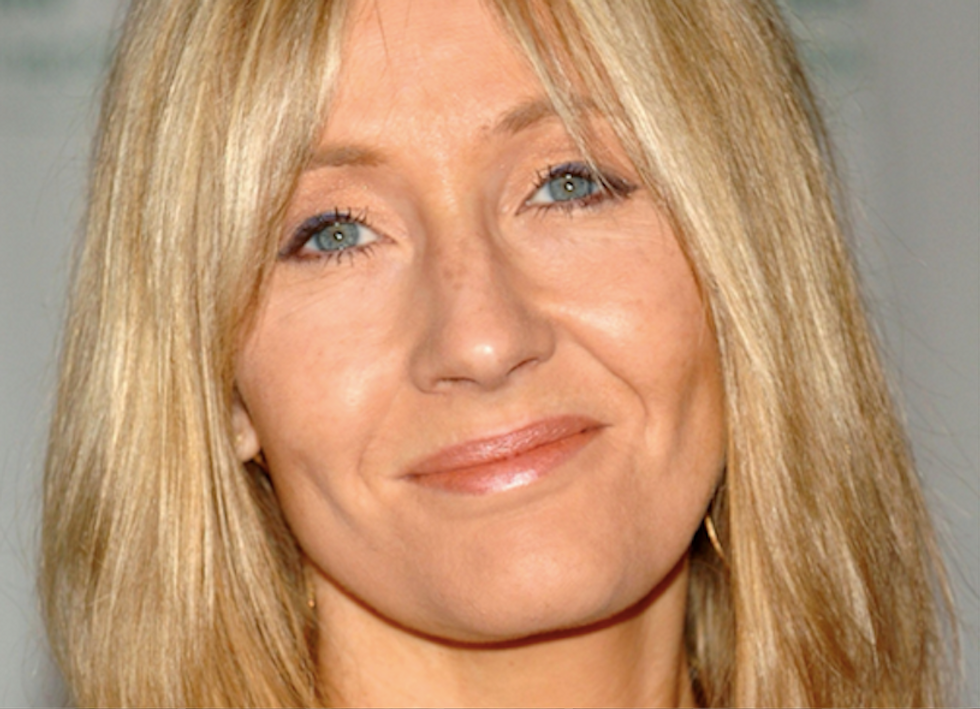 On Monday, author J.K. Rowling tweeted that she was "completely recovered" after experiencing symptoms of COVID-19. While she didn't actually get tested for coronavirus, the virus that causes COVID-19, Rowling said she was experiencing "all symptoms" and wanted to share a breathing "technique" with her followers that helped her manage them.

"I'm fully recovered & technique helped a lot," Rowling tweeted, along with a video of a doctor explaining the exercise. The exercise involves inhaling for five seconds, holding your breath for five seconds, and then exhaling. According to the video, on your sixth deep breath you "do a big cough," covering your mouth (of course). You do this twice, then lay on your bed, on your frontside, with a pillow in front of you taking slightly deeper breaths for another ten minutes.

Rowling is not the first to suggest deep breathing. A search on Instagram or Twitter with the #breathingexercises hashtag surfaces similar suggestions. The public fear over breathing and COVID-19 is understandable, given that difficulty breathing is one of the primary symptoms of severe cases. The global need for ventilators in hospitals stems from this symptom.

Yoga practitioners may recognize the breathing exercise Rowling described, as it is similar to various types of pranayama which are often practiced in class. Some who have chronic obstructive pulmonary disease (COPD) might be familiar with such a technique as well. Indeed, there is scientific evidence to support the benefits of doing this kind of controlled breathing. Deep abdominal breathing exercises can lower blood pressure, and slow the heartbeat, which is why it is useful when you are stressed or anxious. Deep breathing also helps one's body to fully exchange incoming oxygen with outgoing carbon dioxide; healthy people without a lung condition still only use 70 percent of lung capacity.

This is to say that deep breathing exercises certainly have their benefits. But whether or not there is any scientific or medical evidence that they might help those afflicted by COVID-19 is a different story.

"Generally speaking, any sort of deep breathing activities, whether that's a yoga type of breathing or the type that you've just described, may help with some symptoms of shortness of breath in part by opening up parts of the lung that may otherwise not be fully open," Buhr told Salon in an interview. "And that could be due to infection, or that could be due to just compression from not taking deep breaths all day, whatever that may be."

Buhr said that he would exercise caution when forcing oneself to cough, particularly if you are likely to have coronavirus. He advised covering one's mouth to avoid putting others nearby at risk. However, Buhr also noted these types of breathing exercises are unlikely to change how one's body will respond to COVID-19.

"Most of the viral infections don't generate a ton of mucus that needs to be cleared out," Buhr said. "So trying to clear out your airways isn't necessarily going to help clear the infection faster as a result of that, especially in somebody who's not sick enough to be in a hospital."

"When we teach patients of COPD to do pursed lip breathing, it's to do pursed-lip breathing for 24 hours — so the benefit of those exercises will be just during the time that you're doing it right," Galiatsatos said, explaining that such breathing exercises can buy a patient some time.

He continued: "So, what I tell people is if you can do breathing exercises, great, if you can't — say you have some disability — the minimum, just sitting upright, or standing if you have that capability is powerful right there because that allows gravity to pull the lungs down and keep them well expanded."

Galiatsatos said that one's lung health prior to infection is a major factor in determining if one's symptoms worsen.

"If you have damaged lungs, the damage isn't just the inability to oxygenate and clear out [carbon dioxide], but the ability to try to respond to a pathogen that's come in," Galiatsatos said. "When you've lost lung tissue, such as in cystic fibrosis or COPD or emphysema, your ability to have the lungs to react to everything you inhale will be lost — so some of those pathogens will come in, land and be like, 'well, no one telling me to leave, so let me cause an infection.'"

The Centers for Disease Control and Prevention says that people with underlying medical conditions are at a higher risk of having a more severe illness from the disease. However, as it is with any infections, nobody knows precisely how their body will react.

"Everyone's going to respond to it uniquely," Galiatsatos said.

Still, even if they won't necessarily help alleviate COVID-19, breathing exercises can help with stress.

"There's a lot of anxiety going around about all of this and taking the time to do mindful breathing certainly will help with that aspect and that may make someone feel better — even if physiologically it's not making a big difference in the way the lung is working," Buhr added.