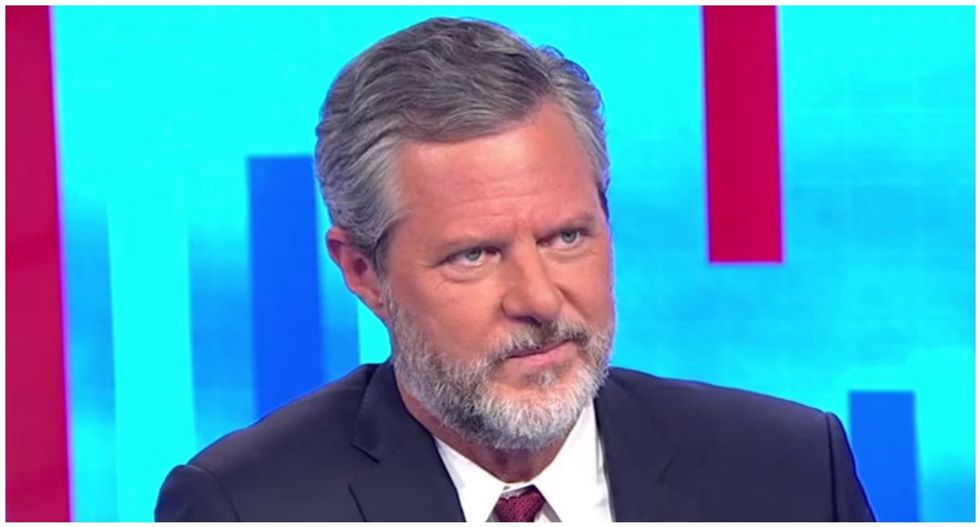 On Wednesday, Politico reported that Jerry Falwell, Jr., the president of Liberty University, has announced there are warrants issued for ProPublica reporter Alec MacGillis and a New York Times photographer Julia Rendleman, who reported on his school's controversial decision to reopen the campus to students in the middle of the coronavirus pandemic.

"Photocopies of the two warrants published on the website of Todd Starnes, a conservative radio host, charge that Julia Rendleman, a freelance photographer for the Times, and Alec MacGillis, a ProPublica reporter, committed misdemeanor trespassing on the Lynchburg, Va., campus of the college while working on their articles," reported Caitlyn Oprysko.

"Falwell cast his decision to seek a case against the journalists as a move to protect his students, asserting that the journalists had probably come from coronavirus hot spots such as Washington, D.C., or New York, and that by being on campus they had put remaining Liberty students at risk. He also complained that Liberty was being singled out because of its status as a religious school," wrote Oprysko. "He contended that there were witnesses for both cases of alleged trespassing, telling Starnes that there were no-trespassing signs posted at 'every entrance' barring everyone from the campus except students, faculty and staff, or those with official university business."

ProPublica president Richard Tofel has said he has seen no evidence of the warrant for MacGillis other than the image posted by Starnes. And Times counsel David McCraw maintains that Rendleman was invited on campus by a student to cover the story and acted completely legally.

"In an interview on Starnes’ show, Falwell ripped a New York Times report that nearly a dozen students were experiencing symptoms of Covid-19, the illness caused by the novel coronavirus. The Times cited 'the physician who runs Liberty’s student health service,' who said three students so far had been tested for coronavirus, with at least one student, who lives off campus, testing positive," wrote Oprysko. "More students were self-quarantining, the Times reported, a move caused, Falwell said, by where they had spent spring break. Falwell said the physician, who he says has 'no official role at Liberty,' had 'immediately issued a correction' to his statements to the Times."

"Falwell defended his decision to allow students back to campus, saying there was 'maybe' less than 10 percent occupancy on campus and that some who remained on campus were international students or were afraid to go home and live with high-risk family members," wrote Oprysko.