John Oliver: If Trump was captain of the Titanic, he would be claiming 'these lifeboats have become so popular' 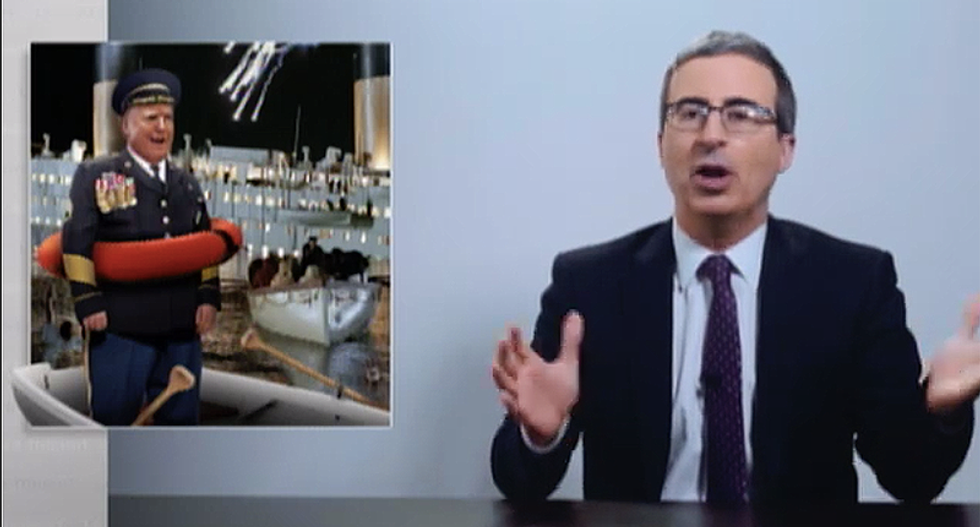 HBO host John Oliver began his Sunday episode of "Last Week Tonight" to bash President Donald Trump for his failed response to the unemployment crisis during the coronavirus.

Oliver began with President Donald Trump bragging about how great the Paycheck Protection Program has been because everyone wants it.

"That's just classic Trump, to brag about how in-demand an emergency bailout is," said Oliver. "If he was captain of the Titanic, you'd just know he'd be saying, 'I just want to congratulate everyone! These lifeboats have become so popular. A few weeks ago, nothing. Now they're moving like hotcakes. It's really a tribute to a well-run ship."

Oliver explained that the PPP efforts aren't going great, and the system isn't working. On the day the program launched, many of the country's biggest banks said they weren't prepared to even take applications. Now, Wells Fargo has announced that they've run out of money to allocate under the program.

Trump's economic council chief Larry Kudlow, bragged about the program, saying that his wife was able to navigate it and fill out an application, so it must be easy. Kudlow's wife apparently went to a local community bank for a small business loan. She is a painter who has painted her husband's shirts and ties for years. It's unclear why she needs a loan during the coronavirus to paint more of his clothing. Still, she applied for the loan.

Oliver cited a "60 Minutes" report showing a woman who had been calling the unemployment office 50 times a day for over a month. She has about a month before she'll be out of money. During the interview, she called the office twice - after just one ring, they hang up on her.

The expose continued with Amazon workers begging for help because most of the warehouses have run out of things like hand sanitizer, disinfectant, masks, and other personal protective equipment. People's lives are being put at risk for the purchases of bored Americans searching for retail therapy. While CEO Jeff Bezos might enjoy the profit, he likely won't appreciate it when his employees start spreading coronavirus through the warehouses and then to customers.