'Listen... and take action': In front of White House, nurses read names of colleagues who have died from Covid-19 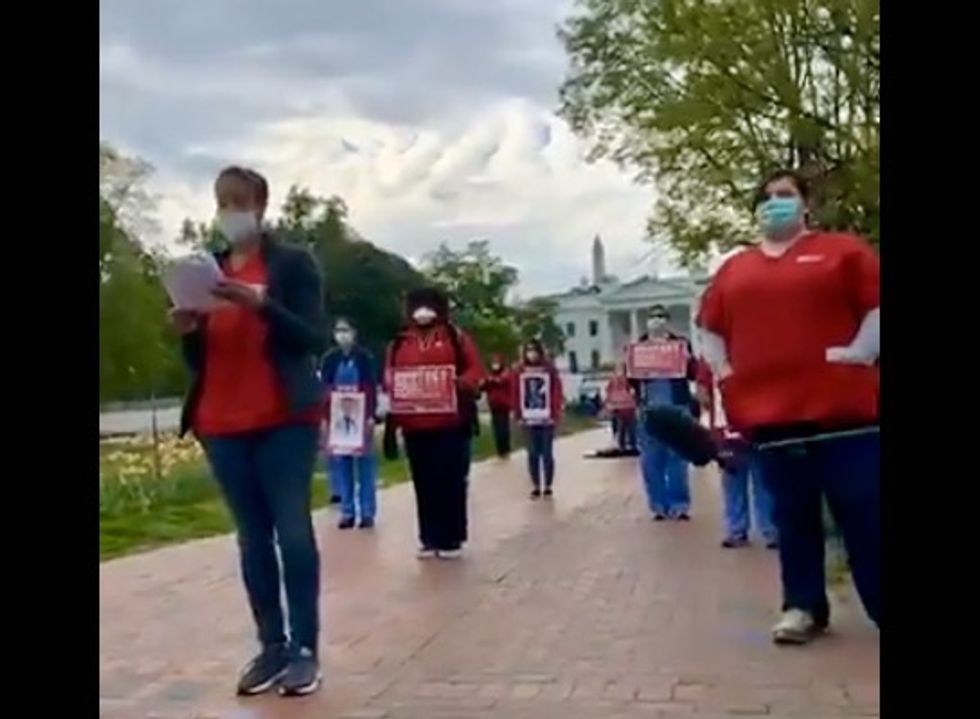 "We are here because our colleagues are dying. I think that right now people think of us as heroes, but we're feeling like martyrs. We're feeling like we're being left on the battlefield with nothing."

Dozens of nurses gathered outside the White House Tuesday and—while wearing face masks and adhering to social distancing guidelines—read aloud the names of 50 fellow healthcare workers who have died of Covid-19 in an effort to pressure Congress and President Donald Trump to provide frontline workers with adequate protective equipment.

"We're tired of being treated as if we are expendable."

"We're demanding that the Trump administration and the U.S. Congress listen to these names, all dedicated nurses who have left families, friends, and colleagues behind," said Melody Jones, a member of National Nurses United (NNU), the union that organized the demonstration. "Listen to their names and take action."

"Let us remember and honor the ultimate sacrifice these nurses paid, mourn their passing, and recommit ourselves to fight like hell for the living," said Jones.

This morning nurses protested for PPE - in front of the White House. They read the names of healthcare workers who… https://t.co/JvdxqV3X8o
— Joshua Potash (@Joshua Potash)1587477587.0

NNU, the largest nurses union in the U.S., has for weeks been urging the Occupational Safety and Health Administration (OSHA) to enact an emergency temporary standard to ensure that all healthcare workers have the protective equipment they need to do their essential jobs safely. The Labor Department agency has thus far refused to act on the nurses' demand.

"We are here because our colleagues are dying," one nurse who participated in Tuesday's demonstration told MSNBC. "I think that right now people think of us as heroes, but we're feeling like martyrs. We're feeling like we're being left on the battlefield with nothing."

An analysis released last week by the Centers for Disease Control and Prevention found that more than 9,200 healthcare workers have tested positive for the novel coronavirus as of April 9. The CDC acknowledged that the number "is likely an underestimation."

"We're tired of being treated as if we are expendable," NNU president Deborah Burger told the Washington Post. "If we are killed in this pandemic, there won't be anybody to take care of the rest of the sick people that are going to come."

"Everybody says they love nurses, they want to protect us," said Burger, "but we still don't have the safety gear that we need."