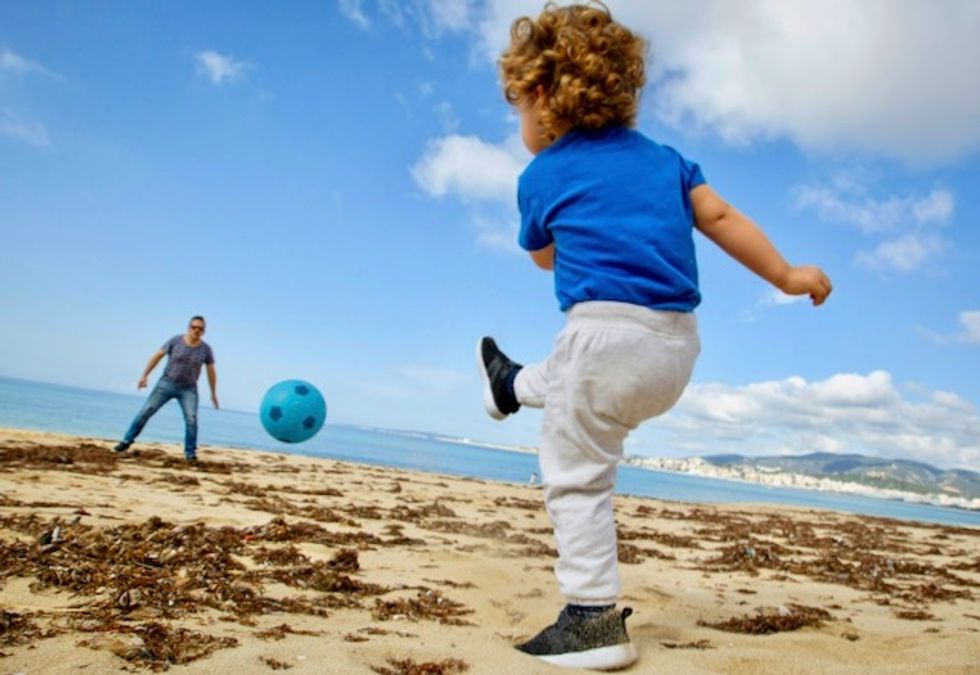 Spanish children ventured outside for the first time in weeks on Sunday, and Italy and New York laid out partial reopening plans as marked decreases in deaths from the global coronavirus pandemic stirred hopes.

Even as confirmed virus infections around the world approached three million, governments were increasingly itching to revive shuttered economies -- although there was intense debate on how quickly to move forward.

In one sign of the turnaround, British Prime Minister Boris Johnson returned to his Downing Street official residence, a month after he tested positive for the virus and later went into intensive care.

On the streets of hard-hit Spain, children hopped on bicycles and scooters -- some wearing small masks and gloves -- as the government allowed children outside for the first time since mid-March.

"They are super excited, very, very impatient. They were up at 6:30 am, saying 'We are going out, We are going out!'," Inmaculada Paredes said in Madrid, readying to take her seven- and four-year-old children outdoors.

One six-year-old, Ricardo, said it felt "very good" to be able to run around with his younger sister in the city.

"We played hide and seek, we raced. We found a ladybug that was lost," he said.

Under the revised rules, children are allowed out once per day between 9:00 am and 9:00 pm, but cannot venture more than one kilometre (0.6 miles) from home.

Italy, which shut down in March as the disease's devastation became clear, gave the green light for wholesale stores and restaurants to resume business on May 4 and for people once again to stroll in parks and visit relatives.

Other shops will open three weeks later as will Italy's many museums -- just in time for summer, when in ordinary times tourists would swarm the country.

But Prime Minister Giuseppe Conte told Italians that they would still have to wear face masks in public and rigorously observe social distancing.

"If you love Italy, keep your distance from others," Conte said in a national address.

In New York, where the signature bustle has been reduced to an eerie halt, Governor Andrew Cuomo said that a first stage of a reopening would start on May 15 if hospitalizations decrease.

Only construction and manufacturing would resume at first and solely in the north of the state rather than New York City, with a two-week delay and checks for new contagion before office-workers return.

AFP / Simon MALFATTO The global spread of the coronavirus

The pandemic has forced more than half of humanity into lockdown, upending life as we know it and tipping the global economy toward a recession not seen in decades.

More than 205,000 people have died from the virus since it first emerged in China in December -- well over half in Europe -- and more than 2.9 million cases have been recorded, according to an AFP tally.

But Europe's worst-hit countries -- Italy, Spain, France and Britain -- all reported drops in daily fatality rates Sunday, a sign the peak of the weeks-long crisis may have passed.

Britain's daily tally was the lowest since March 31, while Italy and Spain's were the lowest in a month. France's toll was a drop of more than a third on the previous day's figures.

In Switzerland, hairdressers, massage parlours, florists and garden centres were among some businesses allowed to reopen come Monday.

"It's super," said Florian, a barbershop manager in Lausanne who was asking customers to wait their turn outside.

"We have to start paying the bills," he said.

Millions of Muslims are under restrictions as they begin Ramadan, the month of dusk-to-dawn fasting that in happier times involves large family meals.

Saudi Arabia said it would partially lift its curfew, allowing malls and retailers to open their doors for certain hours, but would maintain a round-the-clock lockdown in the Muslim holy city of Mecca.

In a reversal, Sri Lanka extended its lock down another week, scrapping reopening plans after a spike in infections.

- How quickly back to normal? -

AFP / TIMOTHY A. CLARY A lone person in mask walks down the steps at the Bethesda Terrace in Central Park in New York City

Rejecting the advice of top disease experts, the US state of Georgia allowed thousands of businesses to resume operations, from hairdressers to bowling alleys.

"How long are we supposed to imprison ourselves?" said bikini-clad Mackenzie Scharf said as she enjoyed the return to the beach.

Oklahoma, another conservative-led state, will let restaurants, movie theatres and other public places reopen from May 1.

"People are still going to get it. But Oklahomans are safe and we're ready for a measured reopening," Governor Kevin Stitt told Fox News.

President Donald Trump, bracing for November elections, has been impatient to resume business.

The US leader faced a fresh volley of criticism after suggesting that coronavirus could be treated by shining ultraviolet light inside patients' bodies, or with injections of household disinfectant.

He lashed out Sunday at the media, threatening lawsuits and asking the "Noble Committee" to rescind awards -- a reference to the Nobel Prize, which has no journalism category -- in a tweet he later deleted.

While cases and deaths plateau, the world remains in wait as scientists race to develop treatments and, eventually, a vaccine for the virus.

Some governments are studying measures such as "immunity passports" as one way to get people back to work.

The World Health Organization warned that people who survive infection cannot be certain they will not be hit again by the respiratory disease.

Deborah Birx, the doctor who coordinates the White House's coronavirus response, said that the WHO was being "very cautious".

Several countries, including France and Germany, are planning to introduce coronavirus tracing apps to alert users if they are near someone who has tested positive.

The technology has already rolled out in Australia, sparking privacy concerns, and has been widely used in Singapore.